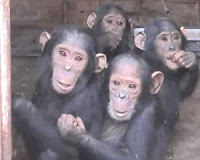 Half of the world’s monkeys and apes are on the verge of extinction, according to a new report by the International Union for Conservation of Nature (ICUN). The Swiss-based conservation network conducted the first large-scale review in five years of the world’s 634 kinds of primates. They found that almost 50 percent are threatened to the point of being in danger of going extinct with another 20 percent considered vulnerable. The ICUN report identified habitat destruction, the hunting of primates for food and illegal wildlife trade as the major threats facing the mammals. We’ve raised concerns for years about primates being in peril,” said ICUN scientist Russell A. Mittermeier. “But now we have solid data to show the situation is far more severe than we imagined.”

Primate populations problems occur across the world. ICUN described the situation in South East Asia as “terrifying”. In Vietnam and Cambodia, approximately 90 percent of primate species are considered at risk of extinction. This represents a serious escalation of the problem in the last five years. In 2002, a previous ICUN survey found that “only” 20 percent of primates were then at risk. The numbers of gibbons, leaf monkeys, langurs and other species have dwindled due to rampant habitat loss to allow for rapidly increasing human population growth. The problems caused by the disappearance of rainforests are exacerbated by hunting for food and the wildlife trade for use as traditional Chinese medicine or pets.

Orang-utans on Sumatra and Borneo are also in grave peril. The two islands are the only natural habitat of the orang-utan. ICUN regards the Indonesian Sumatran orang-utan as “critically endangered” with five to seven thousand in the wild, while the Borneo (split between Malaysia and Indonesia) orang-utan is “endangered” with a population of 45,000 to 69,000. While habitat destruction is again the most significant threat to wild populations, the illegal domestic and international trade (especially to Thailand and Cambodia) in live animals is also significant. Many animals end up as “performers” in poorly managed theme parks and law enforcement is weak.

The problem in Africa was almost as bad with 37 percent of all African primate species considered at risk. Despite a recent small rise in numbers, the mountain gorilla remains on the critically endangered list. About 600 gorillas live in the Virunga Mountains which straddle the borders of Rwanda, Uganda and the DRC. While gorilla exportation is supposedly strictly controlled by international agreements such as CITES (Convention on International Trade in Endangered Species of Wild Fauna and Flora), there is still an active, lucrative market for endangered primates. Many animals end up in zoos and private collections. Hunting and poaching are also a big problem. Gorillas are shot, speared, and trapped for their meat as well as for trophies. They are also the unsuspecting victims of snares set for smaller animals and die of infected wounds. Logging and agriculture growth associated with a human population boom is also destroying the Virunga habitat.

The ICUN report warning is already too late for other African primates. Two of the 13 species of red colobus monkey may already be extinct. There have been no confirmed sightings of the DRC’s Bouvier’s red colobus or the Ghanaian Miss Waldron’s red colobus since 1978. Researchers believe that the red colobus monkeys are more threatened than any other group of primates in Africa due to the fact they are especially sensitive to habitat degradation as well as being easy prey for hunters.

ICUN identified the need for reforestation as the key to stopping primate extinction. Two threatened Brazilian breeds of lion tamarins are recovering after three decades of sustained conservation efforts. While they are no longer in immediate danger of extinction, their populations remain very small and they require new habitat for their long-term survival. Anthony Rylands, the deputy chair of the IUCN Primate Specialist Group said the lion tamarin projects show the value in conserving forest fragments and reforesting to create corridors that connect the populations. “If you have forests, you can save primates,” he said.

But this is a rare success. Human acquisitive instincts are causing an ever more rapid evolutionary holocaust. These instincts can’t tell humans when to stop, until something we never intended to harm is fatally deprived of something it needs. As Alan Weisman said, “We don’t actually have to shoot songbirds to remove them from the sky. Take away enough of their home or sustenance, and they fall dead on their own.”
Posted by Derek Barry at 8:11 pm