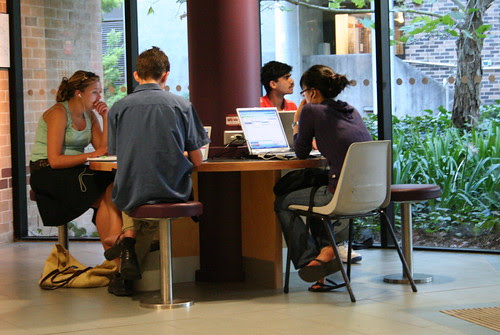 A comprehensive new study of Internet usage in Australia has found there is a growing digital divide between rich and poor. The study found that 20 percent of the people surveyed had never used the net, resulting in a gap between information haves and have-nots. Lead project investigator Julian Thomas said the divide reflects patterns of uptake that are repeated elsewhere in the western world. “If you're male, employed or studying, if you have a university degree and a higher than average income, you are more likely to be online,” he said.

The report entitled “The Internet in Australia” (pdf) also found that 80 percent of those that use the Internet have home broadband connection. It says broadband technology is changing what people do in fundamental ways. Users are consuming far less traditional media such as radio, television and newspapers and are also more likely to use the Internet as their primary source of news. As a result, broadband users value the Internet more highly and they use the internet for longer and for a greater variety of purposes.

The report says the Internet is now a mature technology in Australia. The majority of users have been online for over five years, with ten percent of early adopters online for over ten years. Only a very small proportion of respondents were new to the technology. There were significant differences in patterns of usage between life stages. While 86 percent of all employed users use the Internet regularly, over a quarter of all unemployed people do not use the net. Internet usage is lower still for homemakers and primary cares, over a third of whom are non-users. Retired people are the slowest adopters with just 38 percent penetration. This is also reflected in the use by age categories with a gradual reduction in usage as people get older, and then a dramatically falling off for those over 64.

Perhaps surprisingly, the study found no significant variation between the sexes. While more men use the Internet than women, the gap was not huge with a ratio of 74:71. This finding mirrors US trends showing that women are catching up in overall use. However, income and education were differentiating factors. The higher the income the more likely they had regular Internet access. While just four in ten respondents living in the lowest income households used the internet, that figure shot up to 93 percent for those in the highest income bracket. Similarly those with tertiary education were twice as likely to be connected as those who left school before Year 12.

The final major area of difference noted by the study was the urban-rural divide. 77 percent of those living in capital cities used the Internet compared to 65 per cent in regional areas. Big city dwellers were more likely to have broadband connections, accentuating the difference in connectivity between the bush and the Big Smoke. It could be a while yet before this gap is bridged. In April Labor Communications Minister Stephen Conroy scrapped the regional broadband contract it inherited from the previous government claiming it would only reach 72 percent coverage of regional areas rather than the 90 percent it was contracted to achieve.

The Digital Futures report is a product of the ARC Centre of Excellence for Creative Innovation at Swinburne University’s Institute for Social Research. According to Julian Thomas the study “is an ambitious, collaborative, world-wide attempt to map something that was until very recently unthinkable.” He believes it has the potential “to tell us a great deal about who we now are – or more precisely, who Australians are becoming in the new era of networks.” The large-scale study surveyed one thousand Australians in June and July 2007 for its research. The survey covered respondents from every state and territory and were mapped across five age groups as well as gender and location.

The study is the first survey undertaken by the Australian component of the World Internet Project (WIP). WIP is an international collaborative project which examines the social, political and economic impact of the Internet and other new technologies. Spread across 20 countries, it was conceived as the study of the Internet that should have been conducted of television in its early days. Now the WIP believes that the Internet's influence will ultimately be far greater than television. According to media writer Margaret Simons, “watching free-to-air television is something that old people do – and even they are slipping away”.
Posted by Derek Barry at 11:14 pm

I work at a public library in Lexington, KY, USA and the majority of our customers are lower income, inner city residents who come to use the internet provided through about 50 public-access computers. We also teach computer classes - typically to middle-class soccer moms and older adults - twice daily Monday thru Thursday.

We also have 5 branches with their own computer centers - though 3 of these 5 typically have a clientele comprising of middle to upper middle class. Of the other two branches, Village is almost completely Latino/bilingual and teaches their own computer classes in Spanish; and Northside is in a predominantly black suburban neighborhood.

I'd say the highest computer usage here is the Central branch (where I work with all the innercity kids and a large population of homeless, semi-homeless) and the Village and Northside branches. We're trying to fill in the gap.

having a library service with free internet is certainly a useful tool in bridging the divide.

But, it doesn't really support one of the great benefits of home usage, the ability to get online at a moment's notice.

With more and more of life's opportunities and necessities migrating online, this lack of spontaneous access will become a defining filter for the have-nots.

It will never replace the ubiquity of television until the equipment needed to support it is cheap enough for everyone to afford (or else is means-tested & subsidised).