Malcolm in the middle: Liberal sprinklings of Turnbull 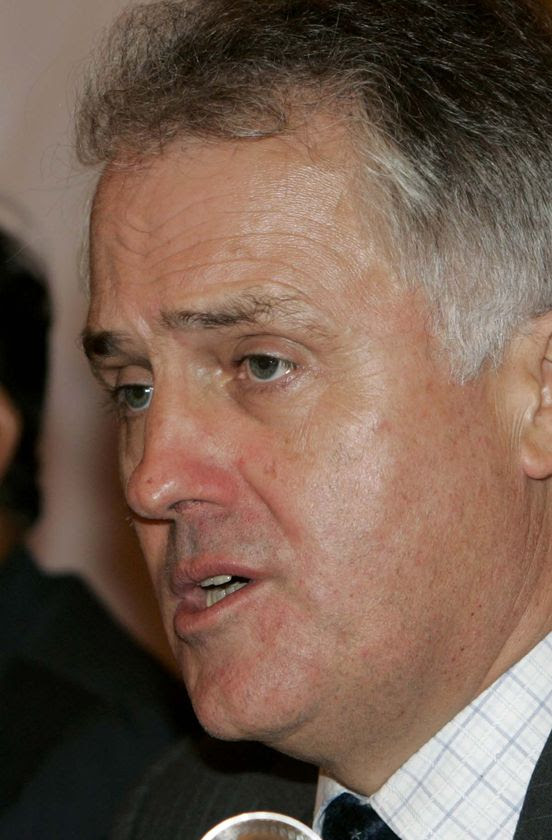 With the Australian parliament set to resume tomorrow, ABC’s Four Corners set the scene nicely with an enjoyable review of the “brilliant career” of Opposition Treasury Spokesman Malcolm Turnbull. The review is timely. With Liberal leader Brendan Nelson about to fall on his own sword and Peter Costello too busy selling his book, Turnbull is about to complete a meteoric rise to party leadership after just four years in parliament. And apart from serving up the occasional doozy such as the “the winter in Malcolm’s tent”, the ABC provided an enlightening coverage of most of the Turnbull bases in their unauthorised review. Turnbull refused to co-operate with the ABC despite initial agreement. But several key Liberal powerbrokers were prepared to go on camera. Tony Abbott, himself with longer-term leadership aspirations, said “Malcolm is one of those people who is destined for great things” and called him a determined and focussed human being.

As Abbott well knew with the question ABC asked him, these features are conspicuously absent in Peter Costello. But like Costello, the biggest prize of all may yet elude him. Turnbull is the richest man in parliament but money can’t buy him what he most wants: the Prime Ministership. Even as Liberal leader, he is likely to lose the next election. Will he hang around until 2013 to find out if he can get the top job? Or is it time for another audacious move and suggest a national government with Labor? After all, his views on climate change and the economy are not substantially different from Rudd’s. It seems even left-wing Phillip Adams thinks the “Bollinger Bolshevik” is the best man for the job.

Turnbull, as Adams says, has always been a winner. Malcolm Turnbull was a Rhodes Scholar who paid for his law and arts degree by working as a political journalist. After being appointed to the bar, Kerry Packer appointed him legal counsel when he was just 28 years old. He defended Packer in the 1984 Costigan royal commission. Confidential case summaries were leaked to the National Times which revealed a prominent businessman codenamed “Goanna” was accused of allegations of drug trafficking and maybe murder. It was Turnbull’s strategy for Packer to identify himself as the “Goanna” and turn public sympathy in his favour.

But it was the Spycatcher trial which made him a star. Fellow legal eagle and party front bencher Julie Bishop told Four Corners “we marvelled at a young Australian barrister taking on the British Government". Turnbull revelled in the “larrikin” role, brash and more aggressive than anything ever seen in an Australian court. Margaret Thatcher dispatched top civil servant Sir Robert Armstrong to give evidence. Turnbull tied him in knots and made him admit the British government were “economical with the truth”. The subsequent victory won Turnbull notoriety and professional esteem in equal measure.

Flush with success, Turnbull left the law and moved to high finance. He established investment banking firm Whitlam Turnbull and co with Nick Whitlam (Labor giant Gough’s son) and long-term NSW Premier Neville Wran. The company was funded with $25m from Packer and another $25m from fixer Larry Adler. It was hugely successful and involved in most of the major media deals in the 1990s. The company was heavily associated with Packer’s bid to take over Fairfax in 1991 in an attempt to gain access to their “rivers of gold” - the Melbourne and Sydney classified ads. But the bid proved extremely acrimonious. Turnbull fell out with Packer and fellow consortium member Conrad Black. Turnbull then became an active player in the bid by representing US bond holders who held $450m of potential worthless junk bonds in Fairfax. When MPs from all parties signed petitions criticising the bid, the Hawke Government was forced to hold a parliamentary enquiry. Packer was called to give evidence and was not happy. “I appear here this afternoon reluctantly” he said. He called the enquiry’s bluff. “You’re either going to have to believe me or call me a liar". The enquiry backed off. But Packer was lying; there was “an arrangement” for him to take over. Packer had lined up his offsider Trevor Kennedy to become Fairfax CEO.

Turnbull got revenge for Packer freezing him out of the bid by snitching on him. Turnbull secretly gave Trevor Kennedy’s private notes of his Packer dealings to the Australian Broadcasting Tribunal enquiry chairman Peter Westaway. Sydney University media academic Rod Tiffen says Turnbull feared for his life if anyone found out. But no one made the connection, and the ammunition killed Packer. Two days later Packer withdrew from the Fairfax bid. The leaked notes had showed Packer was lying to parliament. Tiffen said what Turnbull did helped Australian democracy though “whether he did it for that reason we’ll never know”. He certainly helped his bond holders who got their money back and also helped Conrad Black, who briefly won Fairfax. Black is now in jail after his financial shady dealings were exposed. He wrote to Four Corners from his prison in Florida. “I remember Four Corners with some amusement,” he began, “I knew (Turnbull) as an aggressive and opportunity lawyer. Kerry though he was talented and energetic but impetuous and unpredictable… Fifteen years ago there may be have been some questions about his judgement but that may not be the case any more”.

Black may be being disingenuous. Because Turnbull’s judgement does remain in question. Tony Abbott called him “determined and focussed, at best remarkably genial and charming companion” but at worst “a bit of a volcano”. Those who worked with Turnbull in the Australian Republican campaign saw all these sides of his character. Tim Costello, who wanted a different republican model, says Turnbull “bought the franchise.” And Turnbull had put a lot of his money and time into the exercise - $2m of his own money. But despite the idea of an Australian Republic have overwhelming support in 1998, it failed in a referendum a year later. Another pro-Republic opponent Phil Cleary said Turnbull “pranced around like a character of an Oscar Wilde play.” The divisions played into the hands of the monarchist Prime Minister John Howard and the public voted Turnbull’s model down. Greg Barns says Turnbull was misjudged and called him the “intellectual powerhouse” of the campaign.

But the powerhouse was deeply embittered and called Howard “the PM who broke people’s hearts”. Yet when he launched his own political career four years later, John Howard helped him do it. Howard supported Turnbull for a branch stack preselection in his home exclusive Sydney seat of Wentworth. According to Alexander Downer (who like Tony Abbott, did not support the move) “we felt sorry for his predecessor (Peter King) but he hadn’t made impact, [and] wasn’t a strong performer.” Howard forgave Turnbull the republican tongue-lashing and overruled his lieutenants to elect a star recruit, and a man who was most definitely, a strong performer.

But since winning election in 2004 Turnbull has had to learn the basic skills of politics, including the art of humility. For his maiden speech he bussed hundreds of supporters in to listen to him re-invent his image. "I grew up living in flats—mostly rented—and, in the style of the times, with small rooms running off a long, dark corridor,” he said. “I did not feel deprived of anything—apart, perhaps, from a dog. I was rarely inside. The best things in Wentworth—the waves at Bondi, the ducks at Centennial Park or even the brisk nor'easter whipping down the harbour on a summer's day—take no account of your bank balance.”

But others were taking account of his bank balance. While the HIH royal commission had no adverse finding against Turnbull, allegations persist he played a role in Australia’s biggest corporate collapse. The HIH liquidator is now suing Turnbull and Goldman Sachs Australia (GSA) for part of $529m lost in HIH collapse. The case against him rests on whether he knew FAI was worth less than the books showed and whether he endorsed his friend Rodney Adler’s takeover of the company. Adler had hired Turnbull and GSA on the proposed takeover of FAI for a $1.5m success fee. The liquidators now argue in the NSW Supreme Court that the parties knew the company was overvalued. Turnbull says the claim is defective and has no basis in fact. But if there is no settlement, it is possible he could appear as a defendant in court in the run-up to the next major election.

What position Turnbull will be in that next election is likely to be decided in the next month. Nelson’s bad hair days will end soon. But who will succeed him? As the ABC says, Turnbull is currently crisscrossing the country in a virtual campaign while Costello continues spruiking his book in his Hamlet “to be or not to be” moment. The born-to-rule Fortinbras of Wentworth is waiting in the wings for the nor'easter whipping down the harbour in the next act.
Posted by Derek Barry at 11:37 pm

Great summary Derek - I can see I don't need to watch 4Q if I can read your summaries!

I did mean Turnbull, thanks for the pick-up, Des!