Earlier this week, the NSW Police taskforce set up to investigate last December’s riots in the Sydney beach suburb of Cronulla was officially wound down. The few remaining riot-related investigations will now be handed to the NSW Middle Eastern Organised Crime Squad. The taskforce known as “Strike Force Enoggera” arrested 51 people in connection with the riot and another 53 were charged over their alleged involvement in the reprisal attacks that followed.

NSW Police Minister Carl Scully pointed out that the roughly equal number of arrests showed that the police force did not just concentrate on the riot itself rather than the retaliatory attacks. He also blamed a mix of "sun, alcohol and rising tension" for the riot. Scully takes a rather simplistic approach to problem. Certainly, sun and alcohol may be contributing factors but they do not explain the large-scale nature of the violence. But perhaps the answer may be in his throwaway “rising tension” rationale. Tensions did rise. And there were many eager to fan the flames of the wildfire that resulted. Racism was at its heart. September 11, the Bali bombing, the Tampa affair all added to the fuel.

Cronulla is about 26km south of Sydney on a peninsula framed by Botany Bay to the north, Bate Bay to the east, Port Hacking to the south, and Gunnamatta Bay to the west. It is on a suburban train line and is a popular tourist attraction especially for its beautiful beaches. The name Cronulla is derived from kurranulla, meaning ‘‘place of pink seashells’’ in the dialect of the original inhabitants, the Dharawal people.

The riot occurred seven months ago, Sunday December 11, 2005. On that day, a group of approximately 5,000 people gathered in the place of the pink seashells for an ad hoc protest to "reclaim the beach". The protest was organised in response to a spate of reports of assaults and intimidatory behaviour on and around the beach over a number years. Matters came to a head the previous weekend when two volunteer lifeguards were assaulted on North Cronulla Beach. Surf lifesavers said the attack was carried out by a gang of youths who regularly visited Cronulla to harass locals and beachgoers. The item led the Sydney news that night on the commercial stations seven, nine and ten.

The culprits were deemed to be of Lebanese extraction from Sydney’s western suburbs. As a result an SMS text circulated in the week leading up to the 11th calling on a vigilante action that amount to a racial war. The text message read “This Sunday every Fucking Aussie in the shire, get down to North Cronulla to help support Leb and wog bashing day ...Bring your mates down and let’s show them this is our beach and they’re never welcome back.” The SMS was picked up by radio, TV and newspapers and received wide coverage during the days leading up to the Sunday. The demagogue-in-chief Alan Jones stoked up the fires on Monday when he agreed with a caller to his radio show that people will “take the law into their own hands. There'll be an escalation”. On Wednesday the 7th “tensions were rising” to the point where a brawl erupted at the beach when a gang of youths clashed with a media crew. NSW Premier Morris Iemma issued a warning asking people not to take the law into their own hands. He also promised those responsible for the surf lifesavers attack would be brought to justice. 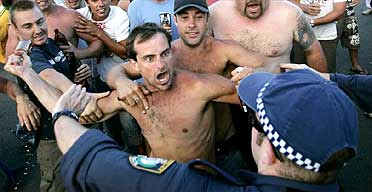 The Sunday itself started overcast but the sun soon broke through. By 10am over a thousand people had answered the SMS call and were gathering on the beach. Many of these had started already consuming alcohol. Many wore flags and displayed Australian paraphernalia. It was a big event, a show. But it also attracted extremists neo-Nazi groups such as Australia First, the Patriotic Youth League and “Blood and Honour”. Blood and Honour’s goal according to their website is to “provide White Youth with an alternative to the hip-hop culture so eagerly promoted by the Zionist media”.
Some of the demonstrators wore tee-shirts with racially-divisive slogans such as "We Grew Here, You Flew Here", "Wog Free Zone", "Aussie Pride", "Fuck Allah - Save 'Nulla", and "Ethnic Cleansing Unit". There were chants of "Lebs out", "Lebs go home" continuously shouted out by some demonstrators. Despite this, the first few hours passed without direct confrontation but the atmosphere soon turned to violence.
As the crowd moved along the beach and foreshore area, one man on the back of a Ute began to shout "No more Lebs" - a chant picked up by the group around him. Others in the crowd, carrying Australian flags and dressed in Australian shirts, yelled "Aussie, Aussie, Aussie ... Oi, Oi, Oi".

When some people of Middle Eastern appearance were spotted, the mob went rampant. One of this group was chased into a hotel bistro. Within a minute the hotel was surrounded by several thousand people screaming and chanting. About a half an hour later a fight broke out across the road and police led away a man with a shirt over his head as the crowd lobbed beer cans at him. As the day progressed anyone of "Middle Eastern appearance" was fair game and several were assaulted including a Jewish boy and a Greek girl. Police leading away the injured were then attack as was an ambulance which was treating six injured people. One ambulance officer was hit over the head with a glass bottle and another on board received lacerations.

At this point the police finally got serious and intervened in riot gear with capsicum spray. Police reinforcements arrived from Maroubra and local roads were closed to traffic. At the end of the day seven people were arrested and four charged. Broken beer bottles scattered Elouera Road, which runs along the foreshore. Dozens were treated for minor injuries. Tensions remained high throughout the evening. There were reports of vandalised cars and windows in the nearby suburbs of Maroubra and Rockdale. By 1:00 a.m., reports of violence had also spread to Brighton Le Sands, where police wearing riot gear sectioned off Bay Street in a confrontation with a crowd of people of Middle Eastern appearance.

On Monday Sydney’s Islamic community hit back. Islamic Friendship Association of Australia president Keysar Trad said the violence was "bound to happen" because of racist rhetoric on Sydney talkback radio throughout the week. "Sections of the media took this issue far too far and one can only surmise that the way this issue was dealt with on talkback radio amounts to incitement," Mr Trad said. He went on to say the media had turned a common youth issue into an issue of ethnicity. NSW Police Commissioner Ken Moroney, with delicious unintentional irony called the behaviour "un-Australian". Premier Mr Iemma weighed in and said lawlessness would not be tolerated and there would be no compromises in upholding the law. PM Howard also pontificated, calling the riots “sickening”. However his statement that he did not believe racism to be widespread in Australia shows that he too did not understand the extent of the problem.

That evening a new SMS flash made a group of a thousand people gather outside Sydney's Lakemba mosque. They claimed they were there to defend the Mosque against attacks from gangs, as had been threatened by the Cronulla rioters. Though they dispersed without violence, residents of Cronulla started to report that cars full of Middle Eastern men had driven into the area and were on the rampage. The local shopping centre was targeted, with several vehicles vandalised. Further carloads made their way to Maroubra for another revenge attack, organised again by SMS. They were armed with baseball bats, crowbars and bricks, and vandalised private property. Many residents took refuge in their homes, while others who tried to confront the gangs were attacked.

The premier announced on Tuesday that police will be given "lockdown" powers which would allow them to prohibit entry into specified areas. On this day the frenzy had spread nationally. Local media in Victoria and Queensland reported that SMS text messages, inciting further riots, were being sent to mobile users. NSW opposition leader Peter Debnam cynically used the riot to attempt wedge politics. He promised that if elected he would “round up the 200 Middle Eastern thugs still on the streets of Sydney” "At dawn on the 25th of March” he theatrically continued “my instruction to the police commissioner will be to take as many police as you need and charge them with anything to get them off the streets."

He was hosed down by the president of the Police Association, Bob Pritchard, who said: "politicians should not be involved in operational policing."
But the problem has not gone away. The question remains what caused the violence: Was it racism, revenge or simply alcohol-induced aggression? There has been years of brooding disagreements and hatred between the two main ethnic groups involved in these incidents: Anglo-Celtic Australians, on the one hand, and Middle Eastern Australians on the other. Tensions have simmered since 9/11 and fears of Islamic based terrorism. The Islamic community has had to deal with racism and has become defensive in return. There are no easy answers and plenty out there ready to light the match again.

One of the many SMS messages that was doing the rounds in the week following is chilling: "We'll show them! It's on again sunday... send this to everyone in your phone book... this is a straight up WAR! We must continue to come together to help the innocet an family's (sic) so every one can enjoy our beach's!" Though the rest of the season passed without incident, the worry is that the problem is just hibernating and will explode again in the coming Summer.
Posted by Derek Barry at 11:26 pm