The Beast of Beslan is dead

Chechen rebel leader Shamil Basayev was killed overnight. Russian Federal Security Service chief Nikolai Patrushev told President Vladimir Putin in a televised meeting that Basayev and many other rebels had been killed in an operation in the Ingushetian republic which borders Chechnya. An Ingush regional interior ministry official said the rebel leader was accompanying a truck filled with 100 kg of dynamite that blew up in the Ingush village of Ekazhevo. The Chechen rebel leadership have yet to confirm his death.

The 41 year old Basayev is the supposed mastermind behind the 2004 Beslan school siege which claimed 311 lives. Although Vladimir Putin and the Russian administration are equally culpable for the massacre, it was Basayev who acquired the nickname ‘the Beast of Beslan’. Alu Alkhanov, president of the Kremlin-backed government in Chechnya, rather hopefully said the killing is likely to undermine the Chechen rebel movement irreparably. Putin called Basayev's killing "deserved retribution" for terror attacks such as Beslan and others.

Chechnya is an Islamic landlocked country in the northern Caucasus between the Black and Caspian Seas. It is surrounded by other Russian republics and the independent state of Georgia. It was conquered by the Russian Empire in the 1870s and has a long history of rebellion against Russian and Soviet era governments. When the Soviet Union collapsed in 1991, Chechnya sought independence once more. It was opposed by Boris Yeltsin on three grounds. Firstly, Chechnya had not been an independent entity within the Soviet Union (unlike the Baltic, Central Asian, and other Caucasian States) but a part of the Russian Soviet Federal Socialist Republic. Secondly, Chechen independence might start a domino effect with other ethnic groups wishing to secede from the Russian Federation. Thirdly, Chechnya was rich in oil. Independence would hurt the Russia’s economy and control of oil resources.

Chechnya refused to sign the 1992 treaty outlining the new Russian federation. It declared independence but was not recognised by any other country. Yeltsin refused to negotiate and the situation descended into full scale war in 1994. Russia expected to quickly win this war but they suffered a humiliating defeat at the hands of Chechen rebels. Use of massive air strikes on the capital Grozny alienated any support it had in the country. War crimes were common on both sides with kidnappings, torture and summary executions widespread. In 1996 Yeltsin sought a ceasefire. A Russian election was looming, the war threatened to spread to neighbouring Dagestan and morale was poor among Army conscripts. He signed a treaty with Chechen leader Aslan Maskhadov in 1997. It lasted barely two years. 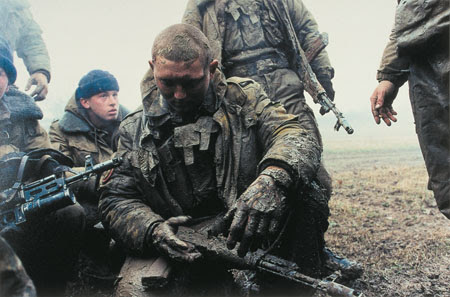 The second Chechen war started in 1999 and continues to this day. Russia became increasingly intolerant of the Grozny government’s ability to control terrorism in the country. Despite the treaty, Chechen rebels had carried out a spate of attacks in Russia and elsewhere. A series of apartment bombings in 1999, which killed 300 people in Moscow and elsewhere, were the last straw for the Russian administration. The Russians blamed Chechen militants and responded by bombed targets within Chechnya. A ground invasion soon followed. Learning from their mistakes from the first war, the Russians slowly advanced on the capital and besieged Grozny after an intense shelling campaign. They took the city after a bloody battle in February 2000. Many Chechen soldiers escaped to continue a guerrilla campaign from the mountains.

Shamil Basayev came from a proud tradition and notable family of Chechen fighters. He learned the war trade in the Soviet military in the early 1980s. He moved to Moscow and spent some time at Moscow’s Engineering Institute of land management before being expelled for poor grades. In 1991 he allegedly joined Yeltsin on the barricades around the Russian White House during the short-lived Russian coup. When Chechnya declared independence later that year, Basayev quickly became involved. He was part of a team that hijacked an Aeroflot plane, en route to Turkey in November. They and threatened to blow up the airplane unless the state of emergency in Chechnya was lifted. The hijacking was resolved peacefully in Turkey and the hijackers got safe passage back to Chechnya.

Basayev took an active role in the First Chechen War, successfully commanding a 2,000 strong battalion which inflicted major Russian losses in the battle for Grozny. He also conducted a terrorist attack on the southern Russian city of Budyonnovsk seizing a hospital with hundreds of hostages before escaping back to Chechnya after a gun battle. His actions helped him become chief of the Armed Forces and when the war ended he was appointed Prime Minister of Chechnya by President Aslan Maskhadov for a six month term, after which he resigned.

During the second war he masterminded the rebel withdrawal from the capital and lost a foot after stepping on a landmine. He escaped to the mountains where he remained a figurehead of resistance. In 2002, he claimed responsibility for the Moscow theatre siege. But it was his role as mastermind for the Beslan school siege that cemented his reputation for savagery. Beslan is a small town in the neighbouring Russian republic of North Ossetia. On 1 September 2004, a group of about thirty insurgents attacked School Number One in Beslan. 1 September is the first day of term and is a Russian tradition known as “Day of Knowledge”. Parents and relatives accompany the children and attend ceremonies hosted by the school. The attackers seized the school building taking more than 1,300 hostages. Five police officers and one terrorist were killed in the initial attack. The area was cordoned off by Russian security forces. The attackers moved the hostages to the school gymnasium and mined the buildings with improvised explosive devices surrounded with tripwires. They demanded total withdrawal of Russian forces from Chechnya. Leonid Roshal, a paediatrician whom the hostage-takers had reportedly asked for by name and who had helped negotiate the release of children in the theatre siege, led the hostage negotiations for the first two days. The world’s media moved in to cover the siege. All hell broke loose on the third day. There are conflicting stories as to how the violence erupted. There was an explosion which killed medical workers removing bodies from the grounds but it is not known whether it was caused accidentally or deliberately by Russian or Chechens. The explosions triggered an assault on the building and a bomb destroyed the gymnasium. It took over two hours for the army to overcome the kidnappers. 344 civilians were killed, 186 of them children and hundreds more wounded.

Basayev claimed responsibility for the attack in 2005. The Russian government put a bounty of 300m roubles ($10m) for information leading to his capture. The Russian appointed leader of Chechnya Ramzan Kadyrov claimed that upwards of 3,000 police officers were hunting for Basayev in the southern mountains. This was personal as Basayev organised the assassination of Kadyrov’s father Akhmad in 2004.

Yesterday Shamil Basayev was confirmed as killed in the village of Ekazhevo, in Ingushetia, He was riding in one of the cars escorting a truck filled with explosives in preparation for an attack when the truck exploded decapitating Basayev. Authorities sent his remains for DNA analysis and confirmed his identity. While the Russian-backed leadership celebrates, it is unlikely that Basayev’s death will end Chechen resistance to their rule.
Posted by Derek Barry at 6:05 pm