Woolly Days spent the weekend in Ayutthaya (pronounced eye-you-TEE-a). Ayutthaya was the capital of Siam (now Thailand) from 1350 until it was sacked by the Burmese army in 1767.

In 1350 the city was founded by Prince U Thong who changed his name to Ramathibodi the First when he ascended to the royal throne a year later. Ramathibodi achieved his power by forging strategic alliances with other Thai royals. His reign brought together in one empire the Khmer rulers of Lop Buri, the Tai in the west, and the Chinese and Malaysian merchants who inhabited the coastal areas. The Khmer stronghold Lop Buri had been the capital but an outbreak of smallpox forced U Thong to move out. He built Ayutthaya and the empire was renamed after the new capital city.

The city got its name from the Indian city of Ayodhya, the birthplace of Rama in the Sanskrit epic Ramayana. Although the Ramayana was a Hindu tale, it became important in South East Asian culture when Indians started to colonise the region from the 8th century onwards. In 1360 Ramathibodi declared Theravada Buddhism the official religion of Ayutthaya and brought members of a Ceylonese sangha, a Buddhist monastic community, to establish religious orders and spread the faith. Ayutthaya is strategically located at the junction of three rivers: the Chao Phraya (which flows through Bangkok), the Lopburi and the Pa Sak. The old city is on an island formed by a bend of the Chao Phraya on the west and south sides, the Pa Sak on the east side and, on the northern side, the Klong Maung canal.

The new empire came under constant attack from the Khmer empire to the East. Ramathibodi’s son Rasusuan retaliated by sacking Angkor Wat in the 1390s. As a result the Khmers moved further eastward away from Ayutthuya and toward Phnom Penh. Free from attack the Thais launched a golden reign and many of Ayutthuya’s beautiful temples date from this period. Over the next four centuries the kingdom expanded to become the nation that is roughly analogous to modern Thailand. The Portuguese arrived in the early 1500s to commence trading with the empire. Around this time too, the empire was renamed to Siam. This was to be the name of the country until 1949 when it was renamed as Thailand (Thai means “free” in Thai language). More European traders arrived in the wake of the Portuguese. The court of King Narai (1656-1688) had strong links with King Louis XIV, the Sun King of France. Louis' ambassadors compared the city of Ayutthaya in size and wealth to Paris.

In 1767, Burma invaded Siam, totally destroying Ayutthaya after a lengthy siege and destroyed its empire. The Burmese King Hsinbyushin took much of the Thai culture back home greatly enriching that of Burma's. Ayutthaya's art treasures, the libraries containing its literature, and the archives housing its historic records were almost totally obliterated, and the city was left in ruins. A new capital was then established at Thonburi on the west side of the river, before King Rama I built his palace on the east bank in 1782. He renamed this new city Krung Thep, meaning the "City of Angels". Krung Thep is more commonly known as Bangkok by foreigners.

The town of Ayutthuya is now a world heritage listed tourist stop on the main north-south railway linking Chiang Mai to Bangkok. Ayutthaya's English name is probably the least standardized of any Thai city: Ayutthaya, Ayuttaya, Ayuthaya, Ayutaya, Ayothaya, Ayotaya, Ayudhya and the Sanskrit original Ayodhya are all used. 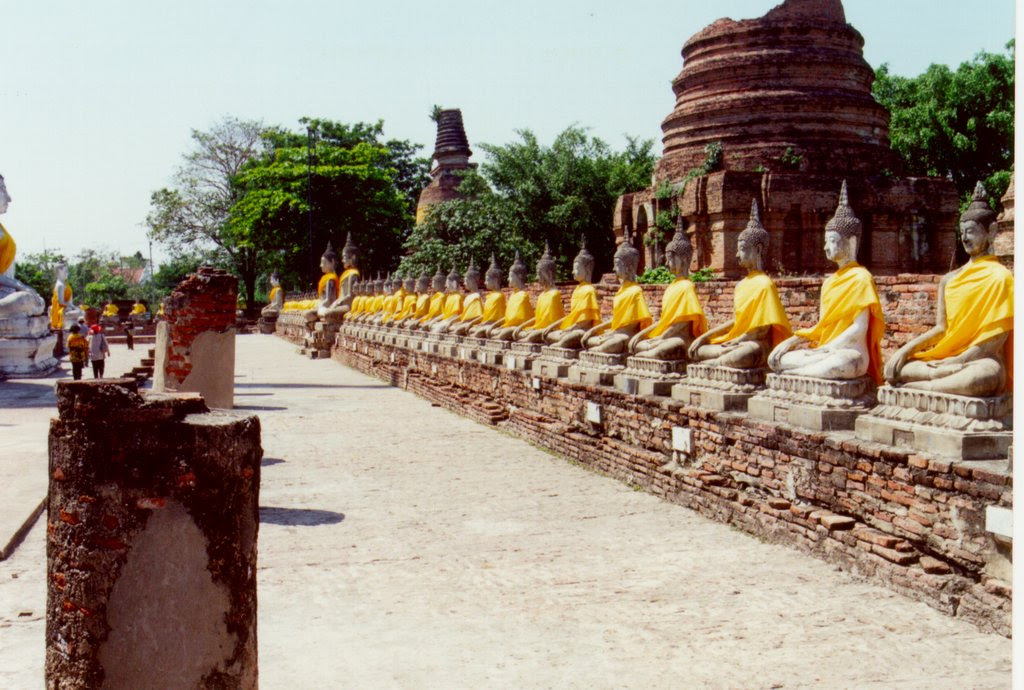 Woolly Days took the 20 Baht third class train which took 90 minutes to get there from Bangkok's Hua Lamphong station. Ayutthaya city centre is a short cross-river ferry crossing from the station. The best way to get around the city is by bicycle and they can be hired for 30 to 50 Baht a day. Cycling around town is great fun and involves dodging slow moving tuk-tuks, being hooted at by buses, being chased by possibly rabid dogs, and working out whether it's possible to beat the traffic lights. As you approach the light, there is an indicator telling you how many seconds are left at green, it can be real adrenalin kick when it counts down to 5..4..3 and you are still 20 metres away from the junction!

Its an easy 12km or so lap around the town and most of Ayutthaya's sites are on the protected western half of the island. Wat Phra Si Sanphet is the largest temple in Ayutthaya, known for its row of chedis (Thai-style stupas). Next door is Viharn Phra Mongkol Bopitah temple which houses a large bronze cast Buddha image. Wat Ratchaburana on Naresuan Rd has a large prang (a type of temple spire) recently restored to its original condition. There are many others dotted around the city some better preserved than others which are crumbling ruins. It is well worth an overnight stop as most tourists come as a daytrip from Bangkok 85 kms downstream. Ayutthaya remains a potent reminder of Thai power in the past.
Posted by Derek Barry at 3:22 pm

This is a very well told and exact resume of the history of Ayutthaya. I didn't find such a short and understandable resume in German language and it was very helpful for me - thank you!