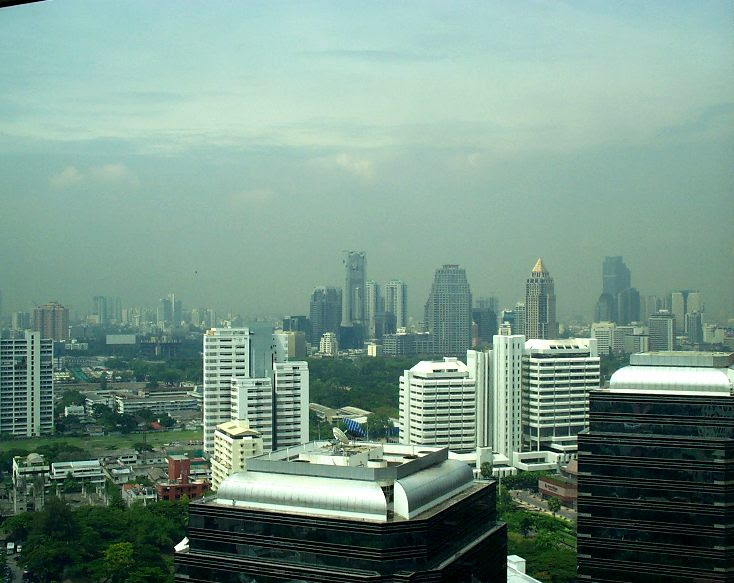 Woolly Days landed in Krung Thep (the Thai word for Bangkok) at 6:15am this morning local time. June and July are the height of the rainy season and although it is certainly hot, humid and sticky, there hasn’t been any rain so far.

Bangkok is officially the world’s hottest large city (according to the World Meteorological Organisation) and it is already living up to that reputation at 7am. It is also the city with the longest name (according to the Guinness Book of Records). The full name for Bangkok is “Krung Thep Maha Nakhon Amon Rattanakosin Mahinthara Ayutthaya Mahadilok Phop Noppharat Ratchathani Burirom Udom Ratchaniwet Mahasathan Amon Phiman Awatan Sathit Sakkathattiya Witsanu Kamprasit.” Schoolchildren learn this mouth-and-a-half-ful by rote and it means "the city of angels, the great city, the eternal jewel city, the impregnable city of God Indra, the grand capital of the world endowed with nine precious gems, the happy city, abounding in an enormous Royal Palace that resembles the heavenly abode where reigns the reincarnated god, a city given by Indra and built by Vishnukam." Apparently.

Paid 100 baht (worth about AUD 4) for a bus to town that I was assured was going down Sukhumvit Rd to the JW Marriott, the Mormon joint that work were putting me up in. Traffic moved relatively freely out of Don Muong airport north of the city (a new replacement international airport to the south-east opens later this year) onto Vibhavadi Rangsit Road as the time pushed towards 7am and the start of the ‘rush three hours’. Strange ads lined the side of the road such as “Fried Sun-dried Venison Meat” at the Smoking Pub...can't wait to find that smoking pub and its deer meat. Within minutes I saw the first klong (most of the canals have been filled in for roads) and then the first Thai Buddhist temple gleaming in reflected sunlight. The city stretches on forever like a hazy mirage. The free moving lanes also prove to be a mirage when we pull off the freeway into choking traffic. We inch along Sukhumvit Road while I peer out the window looking for the Marriott landmark. I don’t find the Marriott but we do stop outside the Landmark Hotel. No one gets off and the bus driver shouts out something incomprehensible. Then worse still we turn off Sukhumvit and get stuck at interminable lights that stay stuck on red for almost ten minutes before going green for 30 seconds. We end up at the bus station. I ask the driver about the Marriott, but looks as if I should have gotten off at the Landmark.

After a cigarette or two he takes me in his empty bus down the long clogged streets where the lights are forever red. I have enough of this delay and decide to get out and walk the ten blocks to the hotel. I still beat the bus there. Nearly 80% of everyone on the street was wearing yellow. This is their way of showing their love for King Bhumibol Adulyadej on the 60th anniversary of his ascension to the throne. The campaign is encouraged by the government. Yellow is the king's birth colour, traditionally corresponding to the day he was born, a Monday (today.) Suppliers say they're running out of shirts, and buyers complain they are being gouged by sellers.

Having checked into the Marriott, and showered and changed, it was time to find the office. I was told it was easy to get to on the Skytrain (BTS) from the Nana station near the Marriott to the Ari station near the office. Sure enough a mere 30 baht got me the eight or nine stations on the overpath. The infrastructure is ugly; towering over the roads but it is brutally efficient and it sure beats the hell out of the gridlocked roads. The BTS was built in 1999. I emerged at Ari into another sea of yellow. The Thais love and revere their king. Unlike how they feel about their controversial billionaire Prime Minister Thaksin Shinawatra. But that’s another story for another day. Time to go home soon and catch up on all the sleep I lost on the overnight flight.
Posted by Derek Barry at 7:32 pm