An Introduction to Cultural Studies

Culture. Now there’s a word with many meanings. My dictionary has eleven different definitions for it. The first one is “the total of the inherited ideas, beliefs, values, and knowledge, which constitute the shared bases of social action”. The 20th century Welsh academic and cultural historian Raymond Williams says that “culture is ordinary”. But he also says that culture is one of the ‘two or three most complicated words in the English language.’ How can both these statements be true?

In calling culture ordinary, he means that society is made and re-made in every human mind. Humans then test this learning by experience. Williams is not impressed by the term ‘cultivated’ and its inherent snobbishness and associated cliques. Nor did he have much time for the term ‘culture vulture’ with its implied sanctimony about the high arts. But there are still many other meanings which Williams does allow the word. The word comes originally from the Latin ‘colere’ which had a range of meanings such as inhabit, cultivate (in the sense of till,) protect and honour with worship. The inhabit sense gave rise to ‘colony’ whereas the worship sense gave rise to ‘cult’ . The French used the word culture in the 15th century to mean cultivation of the land (the till sense) and it quickly passed into English.

Culture initially meant to process something or cause to grow, usually crops or animals. By metaphor it extended its meaning to human development. Culture did not fully gain its abstract sense until the 19th century. By then, it had connotations of class as in ‘persons of birth or culture.’ The Germans also borrowed the word from the French and their word ‘Kultur’ meant civilisation. This German usage was soaked back into English to complicate the usage. Williams talks now of three main usages of culture. i. the process of intellectual development ii. a way of life of peoples and/or periods and iii artistic activity. The third sense is now most widespread. In Cultural studies the reference is primarily to signifying systems. And the way we signify is through signs.

Semiotics is study of signs. The Swiss linguist Ferdinand de Saussure (1857-1913) envisioned a science which studies the role of signs as part of social life Saussure made an important distinction between langue (language) and parole (speech). Langue refers to the system of rules and conventions which is independent of, and pre-exists, individual users; parole refers to its use in particular instances. Applying the notion to semiotic systems, the distinction is one between the code and the message. Semiotics teaches us that reality is a system of signs.

Fashion and clothing are amenable to semiotic treatment. The clothes we wear make a statement. And the statement can be read and decoded. Dress constructs a social order. The source of meaning for garments can be placed with the clothes designers, the wearers, the spectators and even the society it is worn in (witness the unsuccessful Sumptuary Laws of Elizabethan England which attempted to legislate dress sense). Signs have denotations (literal meanings) and connotations (associated meanings) which work on different levels. The connotative meanings are more subjective and are called ‘hermeneutic’ (interpretative). Both meanings are understood at the same time. This is a historical process. People construct meanings using signifiers from an already existing structure over which individuals have no control. This is typically called a code. 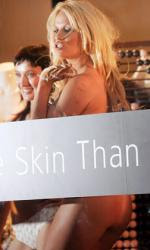 In describing the relationship between signs, semiotics offers two dimensions. A paradigm is a set of related signs and a syntagm is a set of paradigmatic choices. So for example all the shirts in a wardrobe are a set from which the wearer makes a paradigmatic choice. The syntagm is the total ensemble chosen, the wearer’s shirt, shoes, hat, shorts etc. The code of the syntagm will differ depending on the paradigmatic choices. For example a cardigan with an open collar may connote a ‘sporty’ look whereas the same cardigan with a closed collar may connote a ‘dressy’ look. This is purely a cultural signification. Similarly in a Western-style restaurant we eat a starter followed by a main course followed by a dessert. The meal syntagm is also a cultural construct.

Advertising takes this coding a stage further. They constantly translate between systems of meaning and constitute a meta-system where values from different compartments of life become interchangeable. Often the text or images of an ad are not linked by a narrative but by juxtaposition. The aim of an ad is to associate the values of a known meaning with their message. Look at all the ads that use the notion or image of Australia to sell a product. We know too that sex sells.

Ads also use two concepts of figurative language to produce meaning: metaphor and metonymy. Metaphor is the substitution of one signifier for another. It can make complex ideas simpler or more colourful such as the use of the phrase ‘couch potato’ to describe a lazy TV watcher. Metonymy uses part of the signified to stand as a signifier. Therefore some part of an object is used describe the whole object (describing the king as “the Crown”) or vice versa, the whole object is used to describe some part it (using "Australia" where "Australian government" is implied). Cultural theorists have criticised the advertising and fashion industries for their manipulation and persuasive techniques. Douglas Keller believes that consumers need to learn how to read ads as texts so they can be analyse and properly critiqued. He has called the advertising industry parasitic and a huge social drain. More money is spent on advertising in the world than schooling. He concludes that we are “going to have to question seriously the priorities, values and institutions of consumer capitalism if we wish to preserve the democracy, freedom, health rights and individuality to which we pay lip service”.

That’s culture for you. The signs are there.
Posted by Derek Barry at 7:39 pm