Ta Mok died on Friday 21 July. With him dies another chapter in the story of the Khmer Rouge. He was also known as "Brother Number Four" and his birth name was Chhit Choeun. He took the nom de guerre of Ta Mok, which means Grandfather (or Uncle) Mok. He was the military leader of Cambodia's brutal Khmer Rouge regime.

He was born in 1926 and trained as a Buddhist monk at Pali High School in the Cambodian capital Phnom Penh. He left the order to take up the fight against French occupation. During the war years he was an active opponent of the Japanese occupation.

He joined the Cambodian Communist Party after the war and rose to become a member of its Central Committee. He commanded its forces in the south-west of Cambodia initially fighting the French after the war. King Norodom Sihanouk took over the country when it gained its independence in 1953. He held corrupt elections in 1955 which led many leftists in Cambodia to abandon any hope of taking power by legal means. The communist movement, while ideologically committed to armed struggle in these circumstances, did not launch a rebellion because of the weakness of the party.

While the Vietnam War raged, Sihanouk promoted policies he claimed would preserve Cambodia's neutrality. Pol Pot went to Vietnam to unsuccessfully drum up support for a communist rebellion. He returned in 1967 and decided to launch a national uprising in Cambodia without Vietnam’s support. But with a force of only 1,500 men they could only launch guerrilla offensives.

By 1970 Ta Mok was Khmer Rouge chief of staff and he lost a leg in combat in one of the many border skirmishes with Sihanouk’s forces. During this era the Viet Cong was using Cambodia as a base and the US retaliated by launching its secret bombing campaign and invasion against Cambodia. 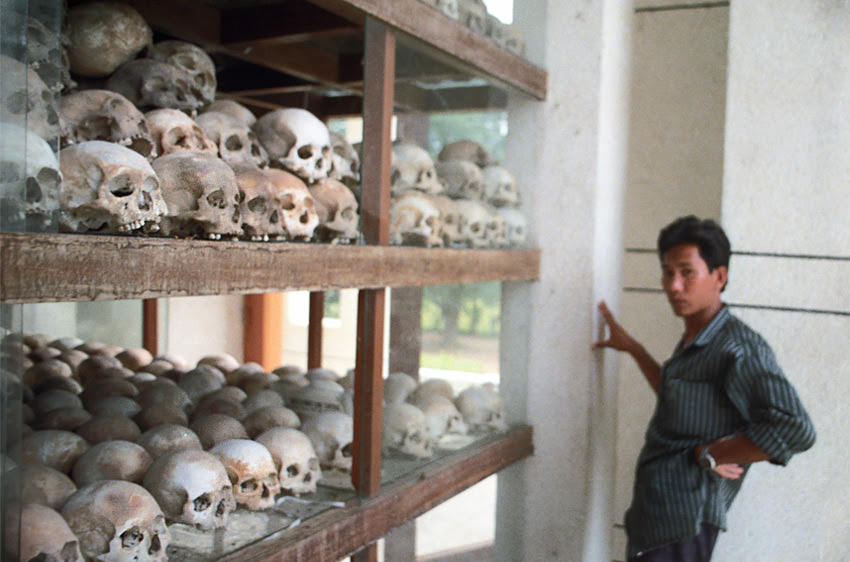 Cambodia descended into full-scale civil war in the mid 1970s, and the Khmer Rouge under Pol Pot took control in 1975. They renamed the country Democratic Kampuchea. They launched an ideologically-driven campaign against so-called "parasites" - intellectuals, city-dwellers and disabled people among them – and massacred up to 2 million people in the so-called Killing Fields. The Khmer Rouge turned Cambodia to year zero. They banned all institutions, including stores, banks, hospitals, schools, religion, and the family. In December 1978, after several years of border conflict and a flood of refugees into Vietnam, Vietnamese troops invaded Cambodia, capturing Phnom Penh on January 7, 1979 and deposing the Khmer Rouge regime.

The Khmer Rouge fled to the west and continued to control an area near the Thai border for the next decade, unofficially protected by elements of the Thai Army and funded by smuggled diamonds and timber. In 1997, following a split within the movement, Ta Mok rose against Pol Pot, who was condemned to house arrest for life. In April 1998, following a new government attack, Ta Mok fled into the forest taking Pol Pot with him. Pot died in Ma Tok’s custody a short while later. In 1978 the Vietnamese army invaded and overran the Khmer Rouge who fled into the countryside.

Ta Mok - the last major Khmer Rouge figure still at large - was finally arrested, inside Thai territory, on 6 March 1999. He was taken to Phnom Penh, and accused of membership of the now-banned Khmer Rouge. The charges were then escalated to genocide and crimes against humanity. He was due to face trial in 2007 with the other key leaders. He leaves behind the living Brothers Number Two and Three, Noun Chea (the ex prime minister) and Ieng Sary (the deputy prime minister) to face the music at the Khmer Rouge trials.
Posted by Derek Barry at 4:44 pm

I love your website. It has a lot of great pictures and is very informative.
»