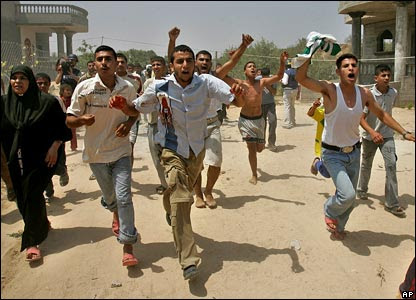 While the world’s attention is focussed on the Israeli-Lebanese tensions, the war continues on another front. In the early hours of Monday morning, July 17, the Israeli air force bombed the Palestinian Foreign Ministry Building in Gaza City. The building, already damaged by earlier attacks, has been completely destroyed. A separate air strike gutted the offices of the Palestine security force in the Islamist stronghold of Jabaliya in the northern Gaza Strip. This follows an Israeli tank and troop invasion into northern Gaza 24 hours ago. Six Palestinians have been killed in clashes and air strikes.

Israel launched the Gaza offensive three weeks ago after Hamas militants captured an Israeli soldier, in a cross border raid a few days earlier. He is the first Israeli soldier to be seized by Palestinians since 1994. The Hamas government demanded that Israel free all Palestinian women and under age prisoners in exchange for the soldier's release. Israel currently has thousands of Palestinians locked up including 95 women and 313 under-18s. Israel refused to deal with Hamas and instead sealed off Gaza. On June 26, Israeli Prime Minister Olmert told a meeting in Jerusalem "This is not a matter of negotiation".

The IDF (Israeli Defence Force) launched “Operation Summer Rains” in response. Within a few days, a large IDF force of infantry backed by tanks formed a ring around Gaza. Israeli forces entered the Southern Gaza city of Khan Yunis on June 28 to search for Shalit. Four Israeli F-16s flew over the Syrian port city of Latakia which is the residence of President Assad in a symbolic move to show up the Syrian leadership as a sponsor of terrorism, and as well protest the presence in Syria of Hamas leader Khaled Mashal. The IDF also targeted bridges to cut the Strip in half. They destroyed a power station which provided Gaza with 65 percent of its electricity. On June 29Israel arrested 64 Hamas officials. These included senior Palestinian Authority cabinet ministers and members of the Palestinian Legislative Council. The IDF stated that the captured Hamas ministers "are not bargaining chips for the return of the soldier - it was simply an operation against a terrorist organization". The Palestinians described it as “an act of war”.

The captured soldier, Corporal Gilad Shalit, was the gunner on a tank attacked in a pre-dawn raid by militants from a 300 metre tunnel dug under the Gaza border fence. Two other soldiers were killed in the attack. The raid was claimed by the military wing of the ruling Hamas party, Izzedine al-Qassam, with help from two smaller organisations, the Popular Resistance Committees and a little known group called “Army of Islam”.

This was a serious escalation in the tensions between the two sides. Hamas ended an informal ceasefire with Israel earlier in June following the deaths of eight members of a Palestinian family on a Gaza beach. The Israeli army said it "regretted" the deaths and called a halt to the shelling. Israel said it has fired thousands of artillery shells into the Gaza Strip in response to armed Palestinian groups such as Islamic Jihad who have been firing hundreds of “Qassam” rockets (homemade steel rockets filled with explosives) into Israel. Israeli shells have killed about 15 civilians this year, including five children. The Palestinian rockets have not claimed any lives but have wounded several Israelis.

But it would be naïve to believe these are all spontaneous reactive events. Many of these actions such as the Palestinian kidnap, the Israeli response and the seizure of Palestinian politicians were all planned months in advance by the participants. All that was missing was something to spark the inevitable escalation. There is no desire for peace in either the Israeli or the Palestinian leadership.

Meanwhile, the world seems impotent to intervene.
Posted by Derek Barry at 7:42 pm