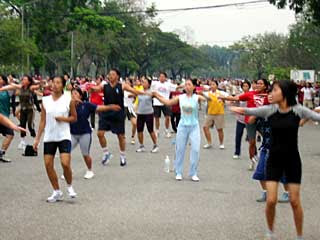 Bangkok is a mass of noise, steel and heat. Over six million people crowd the concrete but there are occasional oases of quiet and repose. Lumpini Park at the junction of Rama IV and Ratchadamri roads is one of these places. Woolly Days walked past it last night on the way to Patpong markets.

Inside the park, there is a lake with some pleasure boats and a constant stream of walkers and joggers do the circuit of the park. There is a Chinese style clock tower, a Chinese pavilion and some graceful sculptures. But the peace and quiet of the park is interrupted by a mass aerobic session, several hundred people in a free jam bobbing to pop music and the instructions barked by a fit virago on a stage. Further on, another twenty or thirty slightly older people are also gyrating in step, this time to a Thai version of Tai Chi to a slower beat. But at the end of the park near the monument to King Rama VI is at least two more aerobic session, each one vying with the other for numbers and noise. The one at the gate is blasting out techno music and dancers aged 8 to 80, bob about in tune, most likely without the aid of ecstasy.

I cross the incredibly busy road (waiting almost 10 minutes for favourable light changes to get across four lanes) underneath the BTS station at Sala Daeng. From there it is a short walk to the Patpong markets. Patpong is for 'farangs' (foreigners, especially white foreigners). Patpong is also imitation city. Here is the place to find designer labels, DVDs, clothing, luggage and jewellery. All on the cheap, most of it illegal and totally uncaring of copyright. Nestled between Surawong and Silom Road, one long alley (or what the Thais call a ‘soi’) is jammed packed full of hawkers and their merchandise. It is also a dense home of pubs, bars, restaurants and strip joints. The ground floor is the entrée style but sequestered away on the upper floors are the full scale sex shows. The bars are gaudy and designed to prise gullible tourists from their dollars. These places are de facto brothels. If patrons want to take a girl out of the bar to pursue sexual relations they need to pay a “bar fine” to the premises.

The market is all privately owned. Patpong gets its name from the the Patpongpanich (or Patpongpanit) family that owns much of the area. They were immigrants from Hainan Island, China, who purchased it in 1946, when it was an undeveloped plot of land on the outskirts of the city. My thoughts are interrupted by another insistent hawker "Want see Pussy Show? Pussy Ping Pong Ball Show". No, thanks. Don't want to see pussy show, not even pussy ping pong ball show.

Eventually the constant stream of sellers anxious to get my business becomes too much and I leave the markets with my wallet unopened. There are easier places to have an unmolested beer than Patpong. Back onto the air-con BTS and home to the hotel for the night. I buy a few cans of beer from the local shop (at about a dollar a pop) and relax in the hotelroom before the oppressive heat finally claims me for the night.
Posted by Derek Barry at 5:54 pm