Final results from South Africa’s election showed that Jacob Zuma’s African National Congress (ANC) has fallen just short of the two-thirds majority it needed to change the country’s constitution. The ANC took 65.9 per cent of the vote which gave it 264 seats in South Africa's 400-seat parliament. While the overall result was a foregone conclusion, the drop of 4 percent from the last election in 2004 was one of the few crumbs of comfort for opposition parties who feared a Zuma landslide would lead to the reduction in local government powers.

Nonetheless it still represents an impressive mandate for the party that has ruled since open elections began in 1994. It blitzed its closest rival the Democratic Alliance (DA) led by Helen Zille which took just 16.7 per cent of the vote. The election also represents a remarkable comeback for the newly installed president. Just four years ago Zuma was sacked as deputy president by his boss Thabo Mbeki for being implicated in a corruption scandal. He was charged with corruption, money laundering and racketeering, but the charges were dropped on a technicality in the lead-up to the election. Zuma’s supporters claim he was the victim of a political conspiracy hatched by Mbeki.

Zuma got his revenge when he assumed leadership of the ANC in December 2007. At the party’s national conference he defeated Thabo Mbeki by a 60:40 margin leaving Mbeki a lame duck president. Zuma counted on the support of people in rural areas and townships where unemployment is nudging 50 percent and poverty is widespread. It was also South Africa's shack-dwellers, farm workers, unemployed and domestic workers who gave Zuma his emphatic election win.

And despite many problems associated with their 15 year tenure of power, most of South Africa’s poor don’t have a logical alternative to vote for. Most people see Zille’s DA as the political front of white business while the newly formed Congress of the People (an ANC breakaway faction loyal to Mbeki) which came third, is seen to stand for black business. Together their combined vote barely topped 24 percent and, according to the BBC, will face pressure to merge if they are to launch a more effective challenge to the ANC in the next election in 2014.

In the meantime, it will be Jacob Zuma's turn to hog the limelight. The 67 year old is the first Zulu president and is known for wearing traditional garb including leopard skins and a spear at ceremonial events. He celebrated victory on Thursday in typical fashion by dancing and singing his signature song, the Zulu anti-apartheid anthem "Bring Me My Machine Gun." Yet many people believe there is a political conservative hiding underneath this flamboyant façade. During the election, Zuma offered prayers to ancestors, denounced same-sex marriage as a "disgrace to God", promised a referendum on the death penalty, condemned political rivals as "witches" and "snakes", and defended polygamy as "African".

Zuma’s most difficult task will be to fulfil his post-election promise to unite the country. Nearly all of the nation’s whites and coloured people voted for the DA and South Africa’s communities still live their lives apart along colour-coded lines despite the emergence of a growing black middle class. As Matthew Tostevin writes at Reuters, Zuma will have to juggle the needs of those who want a greater share of the wealth with those who feel they are politically marginalised.

There is also suspicion over the long-standing charges against Zuma which were suddenly dropped two weeks prior to the election. In 2005 his personal financial adviser, Schabir Shaik, was sentenced to 15 years imprisonment for soliciting and paying bribes and for fraud, mostly to benefit his boss. Zuma was then charged with 16 offences for corruption, money-laundering and racketeering over a controversial $5bn 1999 arms deal with French company Thint. After a complicated court case, the charges were first deemed unlawful, then reinstated on appeal, before finally being dropped due to flaws in the legal process. State prosecutors denied they had yielded to pressure from the incoming government but said that their case had been irretrievably compromised by pressure from the old Mbeki administration.

Zuma also survived a rape charge in 2005 brought by the daughter of a friend. The case was dismissed after the judge ruled the sex was consensual. However Zuma’s testimony revealed startlingly naïve attitudes about sex and AIDS, including an admission that he had unprotected sex with an HIV-positive woman but he showered afterward to reduce the risk of infection. Zuma’s handlers, aware of his unorthodox opinions, shut him down during the election campaign and he refused to answer all policy questions deferring instead to the ANC's executive committee. 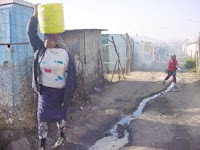 While the ANC has faithfully served the anti-apartheid cause for almost a century, many argue it is now time to move on to a new political era in South Africa. The party’s popularity, membership and moral authority are in decline. Five million South Africans have HIV/AIDS (the largest population in the world),violent crime is endemic; and the black underclass continues to grow. In 2006, the South African Institute of Race Relations estimated that 4.2 million South Africans were living on $1 a day or less in 2005, up from 1.9 million in 1996 (pdf). With or without the protection of the ANC executive committee, Zuma will need a lot more than populist appeal and revolutionary anthems to deal effectively with these issues.
Posted by Derek Barry at 8:30 pm