The CanWest Global Communications Corp has extended a bank deadline to renegotiate a $243 million (all amounts in this article are USD) credit facility. On Tuesday its subsidiary company CanWest Media Inc (CMI) reached a deal with its main lenders to extend the waiver of certain borrowing conditions for two weeks to 21 April. The revised terms means that CanWest will get additional credit in the interim fortnight. Discussions will continue with lenders to look at terms to extend the waiver for a longer period to allow CMI to pursue a recapitalisation transaction. But a lot of hard wheeling and dealing lies ahead for the Canadian media giant to avoid bankruptcy in the coming months.

Lenders and hedge funds have been remarkably flexible so far over several missed deadlines to make various repayments on their massive $4 billion debt. However CanWest faces another crucial deadline next week on a $30m interest payment to hedge funds on risk sensitive 8 per cent senior subordinated notes it failed to re-pay last month. If CanWest does not meet this deadline next week, they could possibly be in default on $761 million worth of notes plus missed interest and associated default interest. This would leave the company in the precarious situation of trying to offload assets in a time when media stocks are virtually worthless.

As Boyd Erman points out, CanWest has two serious problems when it comes to selling assets to potential buyers. The likely prices are dwarfed by the debts tied to the assets, and the company’s convoluted corporate structure makes it almost impossible to make sales work. Erman says broadcasting assets would need to be sold for five times ebitda (earnings before interest, taxes, depreciation and amortisation) to meet the debt of those assets and such a deal would be extremely unlikely in the current market. “CanWest is almost like a landlord with a rental house that's fallen so much in value that selling it wouldn't cover what's left on the mortgage,” he says.

If CanWest does go under, it will provide a tasty meal for asset strippers. The Canadian company owns the Global Television Network, the cable network E!, the Southam newspaper paper chain, and is the majority shareholder of Australia’s Channel Ten. CanWest is controlled by the Asper family (CEO Leonard and his brother David) based in Winnipeg. Much of their debt was accumulated in buying the Southam chain in 2000 from Conrad Black's former company Hollinger International. 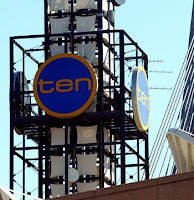 Here in Australia CanWest owns 56.6 per cent of Channel Ten and owns stations in the five mainland state capitals. The uncertainty over Ten’s parent company has affected the local share price and the bottom line. Last week, Ten posted a first half net loss of $57 million and cancelled its fiscal 2009 final dividend. Television revenue was down 12 per cent and the share of its key 16-39 demographic fell 5.5 per cent this year. This Easter local staff have been instructed to take extra leave and asked to restructure their hours to a permanent shorter working week.

Meanwhile CanWest have informally put the feelers out to sell its stake in the Channel. They hope to raise $280 million from the sale if they can sell out at 75c (Australian) which was the floor price in an unsuccessful capital raising project in February, and which co-incidentally was the closing share price going into Easter. CanWest have sounded out possible buyers who already have a stake in Ten including the Commonwealth Bank (6.5 percent) and fund management company 452 Capital (5.7 percent).

The wildcard in any bidding may be Ten’s second biggest shareholder Birketu. Owned by little known Bermuda-based Bruce Gordon (described by Margaret Simons as "Australia's forgotten TV mogul"), Birketu control 13.3 per cent of the network. The 79 year old Gordon already has extensive interests in Australian television. He owns Nine Network stations in Adelaide and Perth and the WIN regional network and is free to extend his interest in Ten in the wake of the 2006 loosening of Australian media ownership. While officially CanWest are saying they are not talking to Birketu, Gordon has long expressed an interest in increasing his stake. If CanWest’s creditors lose their patience in the next few weeks, expect Gordon to make his move and become Australia’s most powerful unknown television mogul in the process.
Posted by Derek Barry at 11:19 pm