The world’s biggest newswire agency Associated Press said yesterday it would sue websites that use its members' articles without permission. Speaking at the company’s annual meeting in San Diego, California AP chairman Dean Singleton threatened to "pursue legal and legislative actions" against websites that do not properly license news content. He said AP would develop a system to track its online content (as well as the content of its 6,700 fee paying member newspapers) to determine whether it is being legally used. "We can no longer stand by and watch others walk off with our work under misguided legal theories," said Singleton. In a complementary press release Singleton riffed off Peter Finch’s character Howard Beale in Network “We are mad as hell, and we are not going to take it any more.”

In an interview with Paidcontent.org’s Staci Kramer, Singleton expanded on AP’s proposed new rules of engagement. He said the media industry had been “timid” about protecting content, in the good times and “didn’t recognise that misappropriation is as serious an issue as it is”. In these tougher times, Singleton said they must protect the rights of their content “We own the content but we’ve let those who spend very little, if any, get the most advantage from it,” he said.

Kramer said AP already had an aggressive reputation with lawsuits on aggregating content and intellectual-property protection “so the idea of suing isn’t new.” But despite Singleton’s threats, it is not yet clear who his targets might be. Google signed a deal three years ago with AP or the use of its stories and photographs. Google claimed it was for a product that complemented Google News not Google News itself (though to my knowledge no such product yet exists in the public domain). However this deal expires at the end of 2009 and AP may be putting in an ambit claim for future negotiations. But as TechDirt points out, Google News drives traffic to news providers' sites, where they're free to monetise that traffic however they see fit.

In any case, it will prove difficult under US fair trade laws to persuade news aggregation websites that they should pay for content they are currently getting for free. It is this “fair use” application that Singleton calls a “misguided legal theory”. AP already has form in this area. Last year, they announced what they called a “quotation licence” for bloggers and journalists for use of AP articles. The fees start at $12.50 for quotations of 5-25 words and rise to $100 for over 251 words. Boing Boing called it an attempt “to replace the established legal and social order with a system of private law”.

But given how impractical these conditions, perhaps what AP may really be after is a guarantee that their originating story appears first in a Google search about the content. AP’s director of strategic content, Jim Kennedy, gave an example of the problem to Forbes. "When the Red River in Fargo rises, we want to people to go to the Fargo Forum. But searching for the Red River on Google might also send you to the London Telegraph." 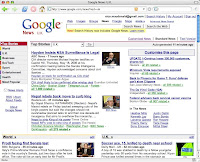 But Kennedy also acknowledged that AP should accept some responsibility for directing traffic to its member sites. He said they are developing software that improves tags and, also crucially, tracks content. This latter functionality will assist AP find out who is using their content that shouldn’t be. The main culprits are the search engines and blog sites who use (and link to) AP content on a regular basis. But as MediaMemo’s Peter Kafka says, stopping this traffic won’t do anything to solve the underlying problems affecting AP’s business. Kafka notes three basic issues 1) too much undifferentiated information 2) the disappearance of classified and local retail advertising and 3) debt-ridden investors who have paid too much for media assets in the last decade.

Roy Greenslade says Google and bloggers are not going to go away. He believes the news agencies need to find an accommodation with them “to ensure journalism survives”. Peter Kafka also points out the dangers of quoting Howard Beale: “You are aware [he] gets shot to death at the end of the movie, right?”
Posted by Derek Barry at 10:21 pm