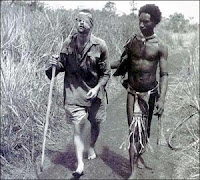 There is a common presumption often mentioned around Anzac Day that the Japanese did not invade Australia in World War II. This is not entirely true. Japanese troops landed in Buna-Gona on 21 July 1942 with the intention of taking Port Moresby. Buna-Gona, Port Moresby and Kokoda, where they were stopped by Australian soldiers and local stretcher bearers known as fuzzy wuzzy angels, have been part of the independent nation of Papua New Guinea since 1975. But in 1942, they was still part of a colony administrated by civil servants sent there by Canberra. The northern part where the Japanese landed was formerly German New Guinea which Billy Hughes won for Australia in the 1919 Versailles talks. The lower half was British New Guinea which was re-named Papua in 1904. But many still forget that Australia was the de facto ruler of Papua and New Guinea for much of the 20th century.

Forgetfulness is a common response to Australia’s closest neighbour. Few Australians go there and the country rarely gets a run in the Australian media. So it was when the country’s Prime Minister Michael Somare appeared in Canberra yesterday to talk to the local metropolitan power, he was mostly ignored. According to Richard Farmer at Crikey, the ABC did not even mention Somare's name when Rudd was giving a military award to the fuzzy wuzzy angels. And he was treated worse last time when he was asked to remove his shoes for an airport security check.

At least this time he did speak to the Prime Minister. Kevin Rudd does not ignore PNG and Port Moresby was one of his earliest overseas stops as PM in March 2008. Yet even Rudd still felt the need to play big brother and tell Somare yesterday that he was not spending Australian aid money wisely. Australia supplies 20 per cent of the nation’s budget worth over $300 million a year.

While Somare defended current practice saying no one starved in his country, Rudd said too much aid was “consumed by consultants” and not enough given to teachers, builders and health workers in villages across the country. But Rudd too, was forgetting something. As Somare told him, Papua New Guinea is a village society. “When one village is poor, the other village helps,” he said. The majority of Papua New Guinea's population is still dependent on agriculture. While PNG makes a lot of money from mineral deposits like oil, gold, and copper, it remains reliant on World Bank aid and support from Australia to survive.

But the indelible influence of Australia on PNG is more than just monetary, it has also left its cultural mark over the decades. Back when PNG was still a colony, Australia was responsible for the census. In the 1950s, the census takers found the hill tribes were changing under Australian influence. They saw that cloth clothing was replacing bark skirts and sporrans and young male initiation no longer involved braiding bark strips in their hair and smearing their bodies with pig grease. Nose piercing with cassowary bones and ritualised cannibalism was also on the way out.

And while Papua New Guinea remains today the most linguistically complex country in the world with 860 languages, many of them are endangered. English is one of only three official languages (the creole languages tok pisin and motu are the others) and the only language of government and the education system. It also has many imported western problems such as car-jacking, firearms offences, robbery, violence, rape and a high prevalence of HIV/AIDS.

HIV/AIDS is central to one of the new initiatives announced in Canberra yesterday. Rugby league is the nation’s biggest sport and one of PNG’s biggest uniting factors. Rudd gave Somare $20 million for a national rugby league competition. Somare wanted league development to boost school attendance and help with HIV/AIDS awareness. The long-term view would also be to integrate the competition into Australia's rugby league. 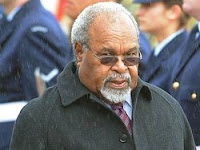 Somare continued his visit to Australia today mostly away from the media glare. AAP reported he toured Victoria's firefighting nerve centre during a visit to Melbourne. Victorians owe a debt of graitude to Somare who donated $1 million to the Victorian bushfire appeal on behalf of his country. He said PNG did not experience fires on that scale, but wanted to show its support anyway. “We thought it was a gesture to support the Australian people because they normally, in our bad times, they always come for our support,” he said. Even if most of the time Australians forget they do.
Posted by Derek Barry at 11:46 pm