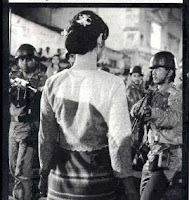 Last week the journalism watchdog group Reporters San Frontieres slammed Fiji's censorship saying the island nation was heading dangerously towards a Burmese-style system "in which the media are permanently subject to prior censorship and other forms of obstruction". However as bad as things are in Fiji and they are very bad, they would have to get a lot worse to compare with the terrible conditions Burmese media workers have had to put up with for the last 47 years.

To understand the nature of Burma’s media, it is important to understand the nature of Burma’s governance. Buddhism has long been at the heart of Burmese political culture and in pre-colonial times religion informed people’s belief that government was an evil to be endured and that kings were unaccountable to the people. A more secular polity emerged in the 19th century under the influence of European colonisation. Lower Burma was established as a British colony after the Treaty of Yandabo in 1826 and the northern part of the country was assimilated 10 years later.

Japan attempted a return to the old monarchical tradition when it ruled Burma during World War II but this idea was quickly swept away after the war. Burma gained independence from Britain in 1948 with a democratically elected civilian political leadership. In 1962 General Ne Win staged a coup under the pretext of preventing ethnic breakaway states and installed a military regime that remains in power to this day. Under his junta, Burma outlawed all other political parties and adopted a central planned economy he called the “Burmese way to socialism”. The effect was disastrous and by 1988 Burma was one of the poorest countries in the world. In 1988, the government violently suppressed a peaceful revolution. Two years later Aung San Suu Kyi (the daughter of a murdered independence hero) led the National League for Democracy to overwhelming victory in free and fair elections only for the military to declare it invalid. They created a new ruling body, the State Law and Order Restoration Council (SLORC) which later metamorphosised into the State Peace and Development Council (SPDC). The SLORC/SPDC continues to rule with an iron fist and violently put down the Saffron Revolution in 2007.

Burma remains beset by major issues today. The SPDC continues to string out Aung San Suu Kyi’s house arrest on a year-by-year basis. Major ethnic groups such as the Shan and the Karen continue insurgencies against a central administration implacably opposed to a federal style of government. All sides of the conflict use unregulated commerce including the thriving opium trade to finance their operations. And Burma is also a geo-political pawn. China wants Burma’s access to the Indian Ocean shipping lanes while both China and India covet Burma’s abundant oil, natural gas, uranium and minerals.

But the Burmese media are unable to report on any of these issues. According to Aung Zaw “the plain fact is that most Burmese have no clue what is happening in their country”. It wasn’t always this way as Burma has a long and rich tradition of journalism. Within ten years of British colonisation of Lower Burma the first western-style newspapers appeared in both English and Burmese. By 1919 Burmese language agenda setting nationalist newspapers such as Myanmar Alin (New Light of Burma) were agitating for change. At the time of independence, Burma had a vibrant network of over 30 newspapers which operated with considerable freedom in a country of much natural wealth and widespread literacy. Until 1962 the Burmese people enjoyed political and civil rights protected by the constitution, a free press and national secular education.

After 1962, the military junta clamped down hard. The new regime installed a system of press licensing that required the registration of all publications. The rulers also issued a warning that seditious news was not to be published. Ne Win soon began to act as a “tyrannical king”. In 1963 the junta closed down the prestigious Nation and began to publish its own propaganda in the Working People’s Daily. By 1966, they banned all private newspapers and expelled Reuters and Associated Press correspondents. In 1993 there remained just one permitted newspaper, the Government run Working People’s Daily, printed in Burmese and English.

Similarly, the broadcast media of radio and television remain tightly controlled by the Government. Radio was a wartime legacy and the Burmese followed the British model when they set up the Burma Broadcasting Service (BBS) after independence. Programmers on the BBS operated with similar freedom to the press until it too was abruptly ended by the military takeover in 1962. Myanmar TV began in 1980 and was supplemented by a military channel in 1990. Both channels are owned and operated by the Government and the military. But the Government doesn’t totally control the airwaves. While foreign stations such as STAR TV are officially available only to high ranking officials and five-star hotels in Yangon (Rangoon), enterprising citizens in northern towns have smuggled satellite dishes across the border from China.

In the so-called Saffron Revolution (2007), the government did not restrict the flow of international news but instead concentrated on crushing the watch-dog function of local media by censoring news sources, reporters and editors. The Reporters San Frontières report on Burma for 2006 confirmed the military had not released its grip on the military. The Press Scrutiny and Registration Division check every article, editorial, cartoon, advertisement and illustration ahead of publication. Burma also insists that all fax machines be registered and journalists can earn a seven year prison sentence for having an unauthorised fax, video camera, modem or a copy of a banned publication. The Committee for the Protection of Journalists describe Burma as one of the most repressive places for journalists, trailing only North Korea on their “10 Most Censored Countries” list.

Censorship is not the only major impediment facing Burmese journalists. Even minimal attempts to report the facts are ruthlessly crushed. Reporting on detained opposition leader Aung San Suu Kyi is banned as is debate about Government policy. In 2006 two journalists were imprisoned for attempting to film outside the country’s controversial new capital at Naypidaw and at least seven journalists were behind bars, making Burma the world’s fifth leading jailer of journalists. Burmese journalists cannot report on diverse activities such as natural disasters, plane crashes, student brawls, regional turmoil and activities of opposition political parties lest they lead to criticism of authorities. Last year a blogger was sentenced to 45 years in jail for daring to report on Cyclone Nargiss. In short, journalism in Burma is not so much about agenda-setting as agenda-avoiding.

Burma’s media regime is a good example of an authoritarian communication model in that the authority of power exists and limits, suppresses and attempts to define its people’s thought and expression. The Internet remained tightly proscribed as of 2002 with just 14,000 email accounts for a population of 50 million people. Yet news is stilling getting through despite intense repression. Because government news sources are unreliable, Burmese people tune in to foreign shortwave radio services from the BBC, Voice of America and Radio Free Asia. Burmese are also turning to older technologies such as videos, tapes, facsimiles, photographs, and printed materials to get messages across. Uncontrolled ideas do get out as the 2007 Revolution showed, even if it was eventually brutally suppressed. While the prognosis for Burma is not good in the short to medium term, the military can never fully defeat the power of communicable ideas.
Posted by Derek Barry at 12:21 am

I like your blog. I'm waiting for your new posts.