Australia’s 2-0 defeat of Uzbekistan in tonight’s World Cup qualifier was not the only meeting between the countries in the last 24 hours. While the footballers did battle in Sydney, consular officials met in Canberra to further diplomatic contacts. The meeting at deputy Foreign Minister level exchanged views on the situation and prospects of bilateral cooperation in the political, commercial and economic, cultural and humanitarian spheres. Items of mutual interest included the situation in Uzbek neighbour Afghanistan, the prospects of co-operation with the Organisation for Security and Cooperation in Europe (OSCE) in combating terrorism, and also co-operation within the UN and other international organisations.

The move is consistent with a slow warming of ties between Uzbekistan and the west. There remains a long way to go in the Central Asian country where democracy has been a dirty word for the last two decades. In all that time, it has been ruled by the same autocratic ruler: Islam Karimov. The 70 year old Karimov has crushed all opposition since taking power in 1989 when it was still a Soviet state. He cemented power when Uzbekistan gained independence in 1991 and has since won a succession of fake elections.

There is little hope of change. Last month EIU Views Wire said Karimov is likely to retain his tight grip on power “with few prospects for democratisation or transparency”. The economy is also suffering badly as import demand declines in Russia, its main export market. Despite his age, Karimov is showing no signs of slowing up and continues to brutally suppress all opposition to his reign.

Karimov cracked down on the main opposition party the Sunshine Uzbekistan Coalition. Party leader Sanjar Umarov campaigned for free trade and private ownership of the agricultural industry but he was arrested in 2005 on trumped up charges of embezzlement and money laundering. In 2006 he was sentenced to prison for eight years and was conveniently out of the way for the country’s most recent election in 2007 which Karimov “won” with 88 percent of the vote.

Uzbekistan’s media is also tightly controlled. Internet sites critical of his regime get an error message and journalists who stray from the official line are jailed or killed. Press censorship was increased after events in 2005 at the eastern border town of Andijan when 800 people were killed. The massacre occurred after a mass protest against a sham trial of 23 local businesspeople accused of Islamic extremism. On the first day protesters stormed the jail but when they massed in the central square on the second day, soldiers shot indiscriminately into the crowd.

The killings prompted widespread international criticism. Karimov was so stung by the wave of complaints, he expelled many foreign companies, aid groups and media in retaliation. The EU imposed sanctions but relaxed them in October 2008. This was not because of any improvement in human rights but rather that Europe wants Uzbekistan’s industrial output. The country is the world’s second largest exporter of cotton and the world’s seventh largest exporter of gold. But the profits of these industries are kept by the ruling elites. Conditions in the state-run cotton farms amount to virtual slavery, according to the International Crisis Group. 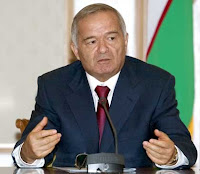 None of this is a concern to Karimov who continues to strut the geo-political stage. He briefly aligned his nation with the US and provided an air base to help operations in Afghanistan in 2001. But in the wake of the Andijan criticism, Karimov turned to China and Russia for support and purged the defence ministry of pro-US supporters. More recently however, there have been signs of another thaw http://www.cacianalyst.org/?q=node/4820 in relations with the US with America being allowed to use the airbase in the southern city of Termez. While Australian and Uzbekistan do not have much in common, yesterday’s meeting is significant in sense it offers another small crack in Uzbekistan’s icy relationship with the west. But it will not totally melt until Karimov dies or is somehow ousted from power.
Posted by Derek Barry at 9:53 pm