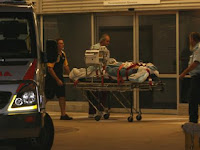 31 casualties from yesterday's boat explosion of asylum seekers are now being treated in Australian hospitals. The boat carrying roughly 50 people exploded near Ashmore Reef after being intercepted by the Australian Navy the previous afternoon. Three people were killed and two more are missing. Another five of the injured are fighting for their lives having suffered burns to up to 70 per cent of their bodies. The incident was quickly politicised by WA Liberal Premier Colin Barnett and Federal Immigration spokeswoman Sharman Stone opening up a Pandora’s Box of anti-immigrant hysteria reminiscent of the unsavoury mood that enveloped Australia in 2001 in the wake of the Tampa crisis.

Prime Minister Kevin Rudd steered clear of the politics as he gave further information about the refugees at a doorstop in Sydney today. He said 31 passengers from the vessel were transferred from HMAS Childers and HMAS Albany by helicopter to Truscott in Western Australia. Eight refugees with serious injuries were sent to Darwin and another was sent to Broome while the rest were escorted to Perth. Another 13 passengers remain on HMAS Albury which is sailing to Darwin. However Rudd refused to speculate on the cause of the explosion. “[I]t’s still too early to confirm the cause of the explosion on the vessel in question,” he said. “In line with that advice I will not be speculating on the cause of the explosion today until that investigation is concluded.”

The government position on the cause of the blast is in stark contrast to that of WA Premier Colin Barnett. Within hours of the incident, he claimed the cause was sabotage. Barnett said refugees deliberately doused the deck with petrol before igniting it. However today he was in damage control mode saying his information was from the State's Emergency Operations Unit, which was relaying information from Northern Command. “I was asked a question on this, I had only 20 minutes earlier had a briefing on the situation and I simply conveyed in good faith the information that had been provided to me,” he said.

Opposition front bencher Sharman Stone went further than her state colleague and directly blamed the Government for the explosion saying “You can't announce a soft policy and expect people not to lose their lives through people smuggling efforts”. She told last night’s Lateline she stood by her remarks and said the Government had created a dangerous situation with its policy on asylum seekers. She said asylum seekers were coming in larger numbers by sea since the August 2008 changes which ended the so-called Pacific Solution and got rid of Temporary Protection Visas. Since then, she said, “a green light flashed in a lot of people smuggling business headquarters, and we saw these boats begin to come on down.”

Her comments set off a firestorm of radio talkback reaction mostly hostile to asylum seekers redolent of the 2001 days of the Dark Victory. But Stone’s complaint was contradictory as well as being plain wrong in many respects. Stone admitted she did not want to see a return to the Pacific Solution where detainees were held on Nauru and PNG’s Manos Island. Nor could she explain what a Liberal Government would do differently in the current situation other than telling Indonesia Australia was serious about people smuggling. Stone’s tirade was assisted by a series of articles in The Australian which sought to beat up the asylum issue.

Foreign editor Greg Sheridan agreed with Stone that it was a “softening Australian border controls” which had to “act as a magnet for illegal immigrants.” But in the next breath he also admitted there is a general rise in asylum seekers around the world. The UN High Commission for Refugees says there were 383,000 asylum applications worldwide in 2008 up 12 percent since 2007. Barely 4,700 of these came to Australia the vast majority of which arrived by air.

Perhaps surprisingly, the largest amount of these people are from China with 24 percent of the 2008 total (Sri Lanka and India are second and third respectively). However because they arrive by plane, the Chinese immigrant are not demonised by the media as Andrew Bartlett notes. A secondary reason, says Bartlett, is there are “diplomatic sensitivities in our politicians drawing too much attention to the fact, which would mainly serve to remind people of how appalling the human rights record of the Chinese government continues to be.” 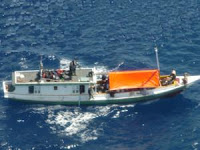 But there appears to be no such sensitivities about those who take the perilous sea journey. In 2000, then PM John Howard successfully made them unpopular by calling them “queue jumpers” appealing to the Australian sense of order while waiting. The implication is that those who arrive without documentation take unfair advantage over those who have completed applications for refugee status overseas in order to enter Australia with a valid visa. However “queue jumpers” is an empty phrase. Many refugees (such as the Afghan Hazaras) come from places where there is no orderly process to asylum and risk imprisonment or death in leaving their own countries.

It is important to realise the small scale of the problem. Even with the increase in numbers, just 18 boats (including 6 this year) have been intercepted since 2005 carrying barely 300 passengers. To deal with this problem there is a new $400 million immigration detention centre at Christmas Island’s North West Cape while the government proposes to spend another $120 million on detention operations this calendar year. Refugee Council President John Gibson said it was important to learn from past mistakes before re-entering a debate on asylum seeker issues. Gibson also reminded commentators and the public that the act of seeking protection from persecution was sanctioned under Australian law. “As a mature democratic nation…we need to treat asylum seekers and handle their claims in a manner which is consistent with the ‘fair go’ ethos of which we are rightly proud”, he said.
Posted by Derek Barry at 12:01 am