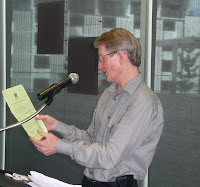 Journalist Sean Dorney spoke publicly today about Fiji's intimidating media censorship and how he and two New Zealand journalists were expelled from the country last week. Speaking to a Brisbane audience, he praised the courage and friendship of the local journalists he left behind to face the country's new draconian press laws. Dorney, who is the ABC’s long-time Pacific correspondent, was kicked out of Fiji because the newly reinstalled (and supposedly) “interim” government did not like what he was writing about. (Note: picture above shows Dorney reading from his expulsion order to today's audience. Credit: Lee Duffield).

As documented in detail here at Woolly Days, Fiji descended into mayhem over Easter when the country’s High Court declared the Interim Government illegal only for the president to swiftly sack the court, abrogate the constitution, and re-install the Bainimarama government all within a matter of days. Having re-established power, the government then clamped down on the media and expelled foreign journalists Sean Dorney and a crew from New Zealand’s TV3.

Professor Alan Knight introduced Dorney today to a room of educators and student journalists at QUT’s Kelvin Grove campus. Knight said that 40 Australian & New Zealand journalists and journalism educators signed a statement of support last week (full text of statement here) which called on governments to “seek to protect all Fiji journalists striving to perform their duties in these difficult circumstances.” The statement also supported Dorney and other foreign journalists who were expelled from Fiji because “they sought the truth in the public interest.”

Dorney then began his talk by showing the audience the deportation notice the Fijian Permanent Secretary of Information issued him just one hour before he was bundled onto a plane back to Sydney. Dorney commended the bravery of the local journalists he left behind many of whom have been arrested and intimidated by authorities. The military government is now taking a direct involvement in their work. “There are censors in the newsrooms headed by a military major,” he said.

Dorney spoke about the three new decrees Fiji has introduced to clamp down on press freedoms. The first decree controls publications and broadcasts and gives the censor the right to control all media output. The second decree says that publishers and broadcasters must submit all materials to be vetted prior to publication or broadcast. The third decree states that any publisher or broadcaster who does not fully comply must “cease operations and all activities”. Essentially all Fijian media are now under the control of Major Neumi Leweni, the newly appointed (and Orwellian sounding) Permanent Secretary of Information.

Leweni has now posted officials in all five of Fiji’s main newsrooms (the three papers; The Sun, The Post, The Times, as well as the Fiji Broadcasting Corporation and Communications Fiji) to monitor operations and ensure the media are complying to the new decrees. However Leweni reserves the right to intervene directly if he feels the media are not compliant enough.

Dorney explained how the media initially hit back with creative protests only to encounter threats from the government. The Fiji Times printed blank pages instead of news and a title “this story could not be published”. Leweni told them if they did that again he would shut them down forever. The Post meanwhile, ran sarcastic stories such as “Man gets on bus” which had lines such as “It was easy...I just lifted one leg up and then the other and I was on”. Again Leweni intervened and, according to Dorney, told them “any more funny business and you are shut down”.

Dorney says he was warned in advance he was likely to be thrown out. On Friday he got a text message saying “brace yourself to depart” and he was expelled a day later. After sending a story about the censorship back to Australia, the Information department phoned him and asked him to come into the office. There he was told that Major Leweni didn’t like his reporting but was not detained. When he emerged he told ABC what had happened before being called in a second time a few hours later. This time the authorities asked would he leave voluntarily. Dorney refused and a short while later he was taken into custody. “I didn’t feel as though I was going to be beaten up,” he said, “but if handed to the military, that could have happened”.

Dorney said the only time he was worried was when a New Zealand cameramen (who was also held) tried to surreptitiously film proceedings. He was quickly spotted and officers demanded he delete all material from the camera and threatened to search his accompanying female reporter. After five hours of questioning, the journalists were all handed over to the Immigration authorities in a car park. Dorney could hear an Australian consular official who yelled out “are you OK?” The official then rang Dorney’s wife with an update while Dorney and the New Zealanders were allowed to spend the night in a hotel under the guard of Immigration officers.

The following morning they were escorted to the airport in Nadi. There they were taken to a special counter to be processed. The airline official told him she could see a booking to Sydney for Dorney but no ticket. “I do have tickets for Brisbane a month later,” he told her. Dorney was the last to board the flight and neither the tourists on board, nor the cabin crew were aware he was being deported. 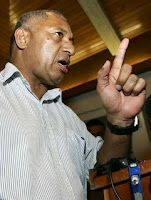 Dorney praised the courage of Fijian journalists and thanked them for their support for him in the days before he was deported. He also attacked the conditions they now work under. “[The journalists] have been told - don’t be disloyal” he said. “They are trying to be loyal to Fiji, but Bainimarama (pictured) wants them to be loyal to him”. Dorney also said the military regime doesn’t care about international pressure and a military attack would be counter-productive. “The Fijian military is a formidable force,” he said. Dorney said pressure on the regime would have to emerge internally and might happen if economic conditions deteriorate further.

Elsewhere. Another view on Dorney’s talk from Lee Duffield at EU Australia Online, a good potted history of Fiji’s troubled history from Legal Eagle at Scepticlawyer and Andrew Bartlett on the response from Fiji’s bloggers.
Posted by Derek Barry at 11:12 pm