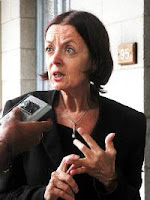 Today’s edition of the Fiji Times had an article about a recent Australian Press Council (APC) judgement of interest to the troubled islands. In truth, it wasn’t great journalism from the Times and deservedly had no by-line as it was almost a direct word-for-word steal from the council judgement itself. And the one addition by the Times sub-editor was mostly incorrect. The headline read “Judge’s gripe upheld”, however according to the APC, the gripe was dismissed “in the main burden”. Nonetheless the case is an interesting one, and one that says a lot about the murky world of the Fijian political and judicial system.

The case was brought by the Australian-born Justice Jocelynne Scutt, who is currently a judge of the High Court of Fiji. The WA-educated Scutt is a distinguished human rights lawyer and former Anti-Discrimination Commissioner for Tasmania. She raised the complaint with the APC about an article in The Australian published on 10 March 2008. This article by Nicola Bercovic was entitled “Judge criticised over Fiji posting”.

Bercovic’s story related how Scutt was appointed to serve on Fiji’s High Court in November 2007 hearing primarily on family law matters. Scott was offered the job after six expatriate judges from the Court of Appeal resigned the year before over concerns about the acting chief judge appointed by the supposedly “Interim” Bainimarama government. The article quoted Fiji Women's Rights Movement spokeswoman Tara Chetty who said they could not support any judicial appointments by the interim government. The article quoted two other prominent Australian lawyers who also questioned Scutt’s decision to take the role.

A few days later (APC says 15 March, but I can only find an article on 13 March), The Australian followed up with a second article from Chris Merritt entitled “Jocelynne Scutt named in human rights report”. This article gave some of Scutt’s background and then implicated her in “a major report on the rule of law in Fiji prepared by the International Bar Association's Human Rights Institute.” Merritt claimed that Scutt was involved in proceedings that were "a chilling use of judicial powers" against free expression. Scutt was unavailable to comment.

However my reading of the IBAHRI report (available here in pdf format) does not fully support Merritt’s insinuation that Scutt was responsible. In the matter cited, Scutt was one of three judges who had judicial concerns about a Fiji Sun article criticising the Interim government’s choice of judges. It was Justice Shameen who had four issues with the article but they did not find against the paper. Scutt did not comment and nothing further came of the case (though I agree it does have “a chilling effect”).

Merritt’s article and the IBAHRI report both quote Angie Heffernan, the director of Fiji's Pacific Centre for Public Integrity. Heffernan had called on Scutt to resign after she (Scutt) commended the Fiji Human Rights report which cast doubt on the credibility of the 2006 Election (and provided Bainimarama the excuse he needed to launch the coup). Heffernan said the report contents were now sub judice and Scutt compromised her position “reflect[ing] the disturbing developments within the judiciary since the December 5, 2006 military coup.”

Justice Scutt complained to the APC that The Australian articles were 'highly critical', 'highly defamatory' and 'damaging'. She sought a retraction of the published materials and the publication by the newspaper of an apology. She claimed her appointment was not political as it was made by the President of Fiji on the recommendation of a Judicial Services Commission and not by 'the military-backed regime'. However The Australian dismissed this complaint as “disingenuous” and the APC agreed.

They also agreed with the paper that Scutt’s high profile made her a genuine subject of public interest. Her acceptance of a judicial appointment in a country under the control of a military regime was a newsworthy story, it stated. It was also unimpressed by her claim that the fact the matter of judicial appointment in Fiji was currently sub judice meant the articles should not be published at all. The APC dismissed this by saying “[t]his provides no effective or convincing justification for her complaint.”

The APC was critical of The Australian’s initial inability to obtain a quote from Scutt prior to the publication of the first article. But even then they noted she declined to comment when finally contacted. "This refusal by Justice Scutt to provide comments based on her belief that, as a judge she was 'not able to speak on the matter'," wrote the APC, “did not preclude the newspaper from continuing to report, and comment on, her appointment.”

The only complaint upheld (and with it the dubious rationale for the Fiji Times headline) was that The Australian went too far linking Scutt with the military regime. These were the statements about "links with Fiji's military rulers" and "is involved with the military regime", which incorrectly implied collaboration with the regime. The APC said the newspaper offered no evidence to justify these statements. Nonetheless Scutt can take little comfort from the judgement. The current political situation in Fiji is too damaged for a truly independent judiciary to function properly. I agree with Greg Barns in another article in The Australian from August last year that Scutt should resign. “If she does that, she will be helping to restore democracy to Fiji and will enhance her standing in the eyes of her peers and the Australian community,” wrote Barns.
Posted by Derek Barry at 11:04 pm