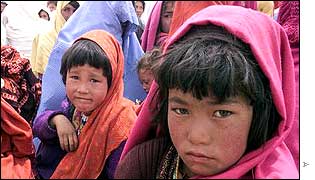 In a new study, the London-based Minority Rights Group (MRG) have identified those groups most targeted for killing by virtue of their religious or ethnic heritage. Their Peoples Under Threat report lists those peoples or groups that are most under threat of genocide, mass killing or other systematic violent repression in 2008. The worst four countries for minority treatment are Somalia, Iraq, Sudan and Afghanistan. While many groups such as Pashtuns, Tajiks, Uzbeks, Turkomans, and Baluchis all face persecution in Afghanistan, it is the Hazaras which face the most threats.

The Hazaras are a three million strong Shia Muslim ethnic minority concentrated in Afghanistan's central highlands. As Asiatic looking Shias in a mostly Sunni country, the Hazaras are the most oppressed minority in Afghanistan. Hazaras speak Farsi (Persian) and claim descent from Genghis Khan. The name derives from the Persian word hazār, which means "thousand". The term originally referred to the Mongol military unit of one thousand which was later applied to distinct groups of people.

Hazaras have faced persecution at the hands of the ruling Pashtun since the 18th century. Under the brutal rule of the Emir Abdur Rahman Khan in the mid 19th century, the highland Hazaras were subjugated under his central authority in Kabul. After an unsuccessful revolt, many Hazaras fled to Quetta in Balochistan and to Mashhed in north-eastern Iran. Rahman forced those that stayed to attend Sunni mosques and abandon Shiism. He also imposed tougher regulations and heavy taxes. In 1901, his successor Habibullah Khan granted amnesty to the Hazaras but the seeds of distrust were already laid too deep. As a result Hazaras continued to face severe social, economic and political discrimination through most of the 20th century.

The majority of the Afghan boat people who arrived in Australia in the last ten years are Hazaras. They were particularly targeted by the Taliban government who considered them as “infidels”. It didn't help that most Hazaras united with the Northern Alliance against the Taliban regime. In 1998, Amnesty International reported killings, village burnings and confiscation of lands from Hazaras, as well as a major massacre of thousands of Hazaras at the city of Mazar e-Sharif in August that year.

The two monumental Buddhas of Bamyan, destroyed by the Taliban in 2001, were in Hazara heartland. The statues were built by Kushan and Indo-Hephthalite peoples in the 6th century and these people are believed to be the ancestors of the Hazaras. Physical features of the frescoes found in the relics and nearby caves greatly resemble the features of modern Hazaras. In order to destroy the monuments, Taliban militiamen tied ropes around local Hazara men before lowering them down the cliff face. Once in place, the men were forced to put the explosives into holes in the Buddhas. Locals described the thunderous boom and the cloud of dust that erupted from the alcoves when the Buddhas were destroyed.

Nine months later, the Taliban were defeated by the American-led alliance. The situation has improved greatly for the Hazaras since then. Hazaras are allowed to enter universities, can work as public officials and are able to fulfil successful careers. Dutch group blog Poligazette says 9/11 was a lifesaver for Hazaras and Hamid Karzai’s government lets them participate in public life. “One of Afghanistan’s Vice Presidents is a Hazara, as is the most popular member of Afghanistan’s Parliament,” they say. “The country’s only female Governor is a Hazara. This was impossible only 6 years ago.”

Yet the new MRG report suggests there is still a long way to go before they are fully accepted into Afghan society. Hazaras continue to have grievances, including desiring greater political control in their region, greater economic opportunities, freedom of religion, freedom to promote their culture, and protection from other communal groups. The renaissance of the Taliban is another concern. In 2004, 16 Hazaras were pulled from their vehicle by Taliban forces in south-central Afghanistan and executed. There remains a long way to go before Hazaras can lively safely without the tag of “infidels”.
Posted by Derek Barry at 11:09 pm

Don’t believe one optimistic word from any public figure about the economy or humanity in general. They are all part of the problem. Its like a game of Monopoly. In America, the richest 1% now hold 1/2 OF ALL UNITED STATES WEALTH. Unlike ‘lesser’ estimates, this includes all stocks, bonds, cash, and material assets held by America’s richest 1%. Even that filthy pig Oprah acknowledged that it was at about 50% in 2006. Naturally, she put her own ‘humanitarian’ spin on it. Calling attention to her own ‘good will’. WHAT A DISGUSTING HYPOCRITE SLOB. THE RICHEST 1% HAVE LITERALLY MADE WORLD PROSPERITY ABSOLUTELY IMPOSSIBLE. Don’t fall for all of their ‘humanitarian’ CRAP. ITS A SHAM. THESE PEOPLE ARE CAUSING THE SAME PROBLEMS THEY PRETEND TO CARE ABOUT. Ask any professor of economics. Money does not grow on trees. The government can’t just print up more on a whim. At any given time, there is a relative limit to the wealth within ANY economy of ANY size. So when too much wealth accumulates at the top, the middle class slip further into debt and the lower class further into poverty. A similar rule applies worldwide. The world’s richest 1% now own over 40% of ALL WORLD WEALTH. This is EVEN AFTER you account for all of this ‘good will’ ‘humanitarian’ BS from celebrities and executives. ITS A SHAM. As they get richer and richer, less wealth is left circulating beneath them. This is the single greatest underlying cause for the current US recession. The middle class can no longer afford to sustain their share of the economy. Their wealth has been gradually transfered to the richest 1%. One way or another, we suffer because of their incredible greed. We are talking about TRILLIONS of dollars. Transfered FROM US TO THEM. Over a period of about 27 years. Thats Reaganomics for you. The wealth does not ‘trickle down’ as we were told it would. It just accumulates at the top. Shrinking the middle class and expanding the lower class. Causing a domino effect of socio-economic problems. But the rich will never stop. They will never settle for a reasonable share of ANYTHING. They will do whatever it takes to get even richer. Leaving even less of the pie for the other 99% of us to share. At the same time, they throw back a few tax deductable crumbs and call themselves ‘humanitarians’. IT CAN’T WORK THIS WAY. This is going to end just like a game of Monopoly. The current US recession will drag on for years and lead into the worst US depression of all time. The richest 1% will live like royalty while the rest of us fight over jobs, food, and gasoline. Crime, poverty, and suicide will skyrocket. So don’t fall for all of this PR CRAP from Hollywood, Pro Sports, and Wall Street PIGS. ITS A SHAM. Remember: They are filthy rich EVEN AFTER their tax deductable contributions. Greedy pigs. Now, we are headed for the worst economic and cultural crisis of all time. SEND A “THANK YOU” NOTE TO YOUR FAVORITE MILLIONAIRE. ITS THEIR FAULT. I’m not discounting other factors like China, sub-prime, or gas prices. But all of those factors combined still pale in comparison to that HUGE transfer of wealth to the rich. Anyway, those other factors are all related and further aggrivated because of GREED. If it weren’t for the OBSCENE distribution of wealth within our country, there never would have been such a market for sub-prime to begin with. Which by the way, was another trick whipped up by greedy bankers and executives. IT MAKES THEM RICHER. The credit industry has been ENDORSED by people like Oprah, Ellen, Dr Phil, and many other celebrities. IT MAKES THEM RICHER. So don’t fall for their ‘good will’ BS. ITS A LIE. If you fall for it, then you’re a fool. If you see any real difference between the moral character of a celebrity, politician, attorney, or executive, then you’re a fool. WAKE UP PEOPLE. The 1% club will always say or do whatever it takes to get as rich as possible. Without the slightest regard for anything or anyone but themselves. Vioxx. Their idea. Sub-prime. Their idea. NAFTA. Their idea. Outsourcing. Their idea. The commercial lobbyist. Their idea. The multi-million dollar lawsuit. Their idea. $200 cell phone bills. Their idea. $200 basketball shoes. Their idea. $30 late fees. Their idea. $30 NSF fees. Their idea. $20 DVDs. Their idea. Subliminal advertising. Their idea. The MASSIVE campaign to turn every American into a brainwashed credit card, pharmaceutical, love-sick, celebrity junkie. Their idea. All of which concentrate the world’s wealth and resources and wreak havok on society. All of which have been CREATED AND ENDORSED by celebrities, athletes, and executives. IT MAKES THEM RICHER. So don’t fall for their ‘ good will’ ‘humanitarian’ BS. ITS A SHAM. NOTHING BUT TAX DEDUCTABLE PR CRAP. Bottom line: The richest 1% will soon tank the largest economy in the world. It will be like nothing we’ve ever seen before. and thats just the beginning. Greed will eventually tank every major economy in the world. Causing millions to suffer and die. Oprah, Angelina, Brad, Bono, and Bill are not part of the solution. They are part of the problem. EXTREME WEALTH HAS MADE WORLD PROSPERITY ABSOLUTELY IMPOSSIBLE. WITHOUT WORLD PROSPERITY, THERE WILL NEVER BE WORLD PEACE OR ANYTHING EVEN CLOSE. GREED KILLS. IT WILL BE OUR DOWNFALL. Of course, the rich will throw a fit and call me a madman. Of course, their ignorant fans will do the same. You have to expect that. But I speak the truth. If you don’t believe me, then copy this entry and run it by any professor of economics or socio-economics. Then tell a friend. Call the local radio station. Re-post this entry or put it in your own words. Be one of the first to predict the worst economic and cultural crisis of all time and explain its cause. WE ARE IN BIG TROUBLE.

Derek I am making a short doco on Hazara and request to use your photo posted of Hazara children. Full accreditation of course.
Vikki Riley
Darwin Australia

your figure about hazara population is not correct. hazara's are the second largest includin 30-33% of afgan ethnic group in afganistan and the official are nottelling the right figure with foreigners and the statistics are also wrong