Ukrainian authorities have approved a new $1.4 billion steel cover for the Chernobyl nuclear disaster site. Ukraine has hired a French company to build the casing over the crumbling concrete sarcophagus that was put over the reactor in the wake of the 1986 explosion. The original casing was a hastily built interim measure designed to last 20 to 30 years. The new cover will take five years to complete after which authorities will then be able to dismantle the reactor inside the casing.

The 105 m high cover is urgently required to replace the old casing which has been leaking radiation for more than decade. The reactor still contains 95 per cent of the original nuclear fuel from the plant. Ukraine is concerned that if the sarcophagus collapses another cloud of lethal radioactive dust could escape. A French construction firm, Novarka, will build the structure and the European Bank for Reconstruction and Development has provided the bulk of the funding for the project.

Prior to the explosion Chernobyl (Chornobyl in Ukrainian) was an obscure city on the Pripyat River in north-central Ukraine. 25kms upstream of the city lay the V.I. Lenin Nuclear Power Plant. On 26 April 1986 the city’s name became known across the world. At 1.21am that morning, inexperienced plant nightshift workers turned off the safety switches while doing a test prior to a routine shutdown. A dramatic power surge caused the fuel elements to rupture. The resultant explosion lifted the cover from the No. 4 reactor. Several explosions followed which released thirty to forty times the radioactivity of the atomic bombs dropped on Hiroshima and Nagasaki.

The graphite in the reactor blazed for ten days. Helicopters dropped 5000 tonnes of boron, dolomite, sand, clay and lead onto the burning core to extinguish the fire and limit the release of radioactive particles. Most of the released material was deposited close by as dust and debris, but the lighter material was carried by wind over the Ukraine, Belarus, Russia and to a lesser degree over Scandinavia and Western Europe.

While Soviet authorities sent in several hundred thousand “liquidators” (most of who received near lethal doses of radiation) to attend to the fire, they released no news to the outside world. The first evidence emerged on 28 April, two days after the explosion. Workers at the Forsmark Nuclear Power Plant in Sweden were found to have radioactive particles on their clothes. Forsmark is approximately 1,100 km from Chernobyl. Sweden’s investigation into the source of the radioactivity showed it was coming from the East. Although the Soviets initially denied anything had happened, finally the official Tass news agency reported briefly that an accident occurred at Chernobyl with “some casualties”.

On 2 May, authorities evacuated everyone within 10km of the plant, including the plant workers village of Pripyat. Two days later, all those living within a 30 kilometre radius including the city of Chernobyl itself - a further 116 000 people from the more contaminated area - were evacuated and later relocated. About 1,000 of these have since returned unofficially to live within the contaminated zone.

Four months after the disaster, the Russians finally came clean at an IAEA conference in Vienna. The Soviet Union's chief delegate Valery Legasov stunned his audience with a detailed and frank expose of what went wrong. British government representative Professor John Gittus (document link) received a thick package of carefully prepared documents containing details such as copies of chart recorders at Chernobyl's stricken reactor at the time of the blast. "For me this was the beginning of perestroika," he said. "We didn't realize that at the time, of course, but Chernobyl was a turning point -- a punctuation mark in Russian history."

However information was slow in getting to those nearest the disaster site. It wasn’t until 1989, that the local public gradually became more aware of the extent of the catastrophe. The number of newspaper articles about Chernobyl tripled and pressure on the Soviet leadership grew to co-ordinate a second wave of resettlement began. In 1991, the third phase of Chernobyl policy was determined by the successor states of the Soviet Union in the contaminated area: Belarus, Russia and Ukraine. Official Chernobyl committees were set up in Belarus and Ukraine to compensate and resettlement victims. 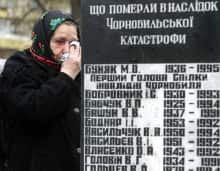 There is no consensus over the death toll. After the initial explosion 28 people died, mostly fire-fighters, from radiation or thermal burns, another 60 or so died in the years that followed. A 2005 UN health agency report estimated that about 9,300 people will die from cancers caused by Chernobyl's radiation. Some groups, such as Greenpeace, say the toll has been grossly underestimated. Their report, based on Belarus national cancer statistics, predicts 270,000 cancers and 93,000 fatal cancer cases directly attributable to the nuclear explosion. Radiation has had a devastating effect on survivors; damaging immune and endocrine systems, leading to accelerated ageing, cardiovascular and blood illnesses. With the temporary sarcophagus likely to leak for its remaining five years of existence, the total death toll could reach over 200,000.
Posted by Derek Barry at 8:26 pm