Sympathy for the Devil: the story of Satan 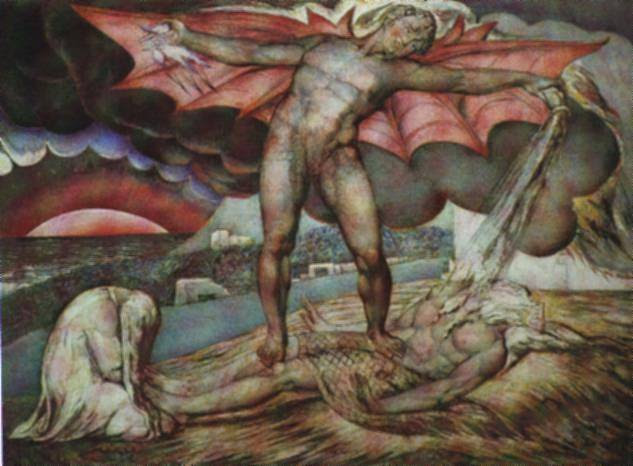 In a speech on the weekend about Iran’s nuclear threat, Israeli opposition leader Benjamin Netanyahu invoked Satan. Addressing delegates at a conference organized by the Interdisciplinary Centre's Institute for Counter-Terrorism (ICT), Netanyahu encouraged the use of military action in the event that Iran’s nuclear program comes to fruition. Netanyahu said he believed Iran would use nuclear weapons against Israel, adding that the Iranian leadership called for Israel to be wiped off the map. "But we are only the small Satan, the great Satan is somewhere else remember that," he said.

Netanyahu did not elaborate who the great Satan was. But his speech raised the question of where the idea of a Satan emerged from, whether it be great or small. Though it was not what Netanyahu meant, the idea of an ultimate evil genius did originally emerge from Iran. Around 600 BC, a Persian teacher named Zoroaster reduced the large cast of Gods to just two. According to Mary Boyce, the sect he founded, Zoroastrianism, is the oldest of the revealed world-religions, and it has probably had more influence on mankind, directly and indirectly, than any other single faith. Zoroastrianism has a cosmic dualism between two gods; the all powerful and good God Ahura Mazda and an evil spirit of violence and death called Angra Mainyu who opposes him. It was Zoroastrianism that invented the concept of an afterlife of hell for those who lived “bad lives”.

This explanation may be surprising to those who believe the devil originated in the Judeo-Christian Old Testament. There is a Satan there of sorts, or rather Ha-Satan - The Satan (in Hebrew “the adversary”). Ha-Satan is not a demon and doesn’t live in Hell. Instead he is servant of God, an angel who does God’s dirty work. He appears in the Book of Job to argue that Job is only pious because he has a good life. Ha-Satan is an archetypal Devil's advocate. God agrees for the Satan to inflict suffering on Job to test his faith. Job continues to believe in God and the Satan loses the argument.

But Persian ideas slowly made their way into the Judaic texts when Israel was conquered during the reign of Babylonian King Nebuchadnezzar II. Then after Alexander the Great defeated the Persians, Greek ideas also filtered into the Middle East. Among their pantheon of Gods is the black-bearded Hades, dark god of the underworld who wields a two-pronged sword for blasting his enemies. Many of Hades characteristics would be passed on to today's Devil.

What the legend of Hades lacked was fire. That element of the legend was provided by the city of Jerusalem. In the Gospels, Jesus warns his followers to avoid the fate of Gehenna. Gehenna was Jerusalem’s smouldering and stinking rubbish dump. It was periodically set alight to burn the bodies of executed criminals. The fires would last for weeks at a time and Gehenna was regarded as a supernatural place. Eventually Gehenna provided the myth of hell with its flame.

By the time of the Christian Gospels at the end of the first century AD, Satan had become a powerful symbolic figure in a battle against new conquerors. Jewish lands were ruled by the Romans. Persecuted Jews and Christians alike saw Satan as the evil force behind the power of Caesar. In the Book of Revelations, Satan is described as the Beast with his human number “666”. Many scholars believe this number is a code which refers to the emperor Nero (the sum of the numerical values of the name ‘Nero Caesar’ in Aramaic is 666).

Despite this dubious numerology, the modern image of Satan was now emerging. Satan was the personification of evil. In the earliest extant pictures he has the black skin of Hades, the wings of a fallen angel and inherited the talons of a dragon, the ancient symbol of evil. Satan was no timeserver. He was busy working with enemies to create mayhem.

When the Roman Emperor Constantine converted to Christianity in the early 4th century, the once persecuted religion slowly began to gain real power. Church leaders claimed that those who disagreed with them were sinners working with Satan. And heresy was the worst sin. Heretics who worshipped other versions of Christianity were clearly in league with Satan and had to be exterminated. The first executions of Christianity’s enemies started around 450 AD and would not stop for a thousand years.

Among the popular pagan religions that needed to be rooted out was the worship of Pan. Pan was a serious threat to early Christianity. He was the god of such goodness as music, happiness and lovemaking, but with Christian propaganda he was demonised and became a goat-headed satyr. Satan inherited Pan’s features of hairy cloven hooves and horns on the head. The sex angle was also exploited by St Augustine. He warned about two flavours of satanic helpers that were wreaking havoc with godfearing people. Augustine said male demons called incubi seduced women at night while saintly men were also in danger from succubi who forced them into lewd sex acts.

By the Middle Ages, the Church has convinced its followers Satan was real and a powerful force of evil. The Gnostics took this further and believed that everything on Earth was evil. The Gnostic group known as the Cathars saw everything materialistic as evil. This was a dangerous notion to a now wealthy Church. Pope Innocent III announced a Crusade against the Cathars in 1209. The crusade lasted 45 years and killed 100,000 people, many of whom believed Satan was even more powerful than the Church said he was.

Crusading was rather fashionable around the turn of the millenium and the powerful Muslim Middle Eastern empire was also in the firing line. Both the Christians and the Muslims inherited their beliefs from the ancient Persians and both believed Satan was fighting on the side of their enemies. One of the many terrible legacies of the Crusades is the Inquisition, whose sole rationale was to root out heretics. The Inquisition was a hell on earth where accused were guilty until proven innocent. Anyone who questioned its work was immediately suspected of being in league with the Devil.

In 1307 King Philip IV (Le Bel) of France used the new powers against witchcraft to accuse the wealthy Knights Templars of worshipping Baphomet, a pagan idol. In reality, it was an excuse to destroy the Templars to gain access to their vast financial resources. On Friday the 13th of October 1307 (the reason the day traditionally carries bad luck) Philip got the long knives out and had all the Templars in France arrested on a variety of charges and accusations.

Templars weren't the only ones in danger. Fear that necromancers and witches abounded swept across Europe. In the Irish town of Kilkenny in 1324 Dame Alice Kyteler (pronounced Kettler) was accused of witchcraft, heresy and having a demon mother. Kyteler was a rich widow and a landowner who had outlasted several husbands. The Church wanted to claim her wealth and lands, so they had the Inquisition accuse her of poisoning her husbands. For good measure, she was also accused of having nocturnal meetings with the Devil. Dame Alice escaped the clutches of the Inquisition and fled to England. She was one of the lucky ones.

Women were seen as vessels of the devil and more susceptible to temptation. In 1486, two German Dominican monks, Heinrich Kramer and Jacob Sprenger, published Malleus Maleficarum, (Latin for ‘the hammer of witches’) a textbook for Inquisitors on how to identify witches. It was a handbook for witch-hunts; a dummy's guide to identifying witches and what they did. Witches had the mark of Satan on their bodies, wrote the monks. They could fly and they worshipped Satan at covens. With the rise of the Gutenberg Press, Malleus Maleficarum quickly became a best seller.

30 years after Malleus Maleficarum was published, Martin Luther emerged from Wittenberg to lead the Protestant Reformation. Luther believed Satan was attempting to prevent him from doing God's work which he identified with the wrongs of the papacy. But Both Catholics and Protestants believed the other was inspired by Satan and used the Malleus to identify its enemies. Hysteria about Satan swept the continent.

When the Puritans went to North America on the Mayflower they brought their ideas Satan with them. By 1688 the Irish servant girl Mary Glover was hanged as a witch. Three years later in nearby Salem, the testimony of three young girls believed to be under the spell of witchcraft led to a mass execution. In the Salem witch trials, 150 people were arrested, 19 were hanged or crushed to death and 17 others died in prison.

The 18th century enlightenment began to banish religion, superstition and ideas about witchcraft. But a new devil arrived to take the place of the old. He was a heroic lonely figure, a rebel battling against the cruelties of fate, and challenging the imperious power of God. The Devil began to be admired in folk tales. Thanks to the humbling influence of these tales, the Devil was No longer feared or hated. The 20th century devil became a figure of fun. Thanks to the power of marketing, he was neither better nor worse than the people he had to deal with.

Things changed again with the counter-culture of the 1960s. In 1968, occult showman Anton Levay founded the Church of Satan in San Francisco. It was part religion part money-making venture. It attracted a great deal of media hype, much of which was created by the publicity-conscious Levay himself. Despite his charlatanism, he attracted a cross section of society who were attracted to the idea of Satan the rebel. In turn, Middle America was outraged.

At the height of the controversy generated by Levay, the good ship Hollywood stuck its oar in. In 1967, Roman Polanski released his masterpiece “Rosemary’s Baby” based on Ira Levin's book about devil worshippers in Manhattan. The heroine’s apparently innocuous neighbours turn out to be a coven of witches who steal her baby and her husband has struck a Faustian pact with the Devil. The film is an unexpected hit. Five years later, the Exorcist is another monster Hollywood hit bringing the idea of good versus evil onto the screen and into popular culture. Hollywood’s discovery that it could make a lot of money with stories of devil worship began a paranoia and moral panic about Satanism that swept America. In the 1980s this hysteria was called the “satanic panic” most of which was proved to be totally groundless.

Most modern Satanists say that the Devil is not evil but stands for a spirit of change. They say Satan represents opposition and balance. It means simply becoming the Devil’s Advocate and looking at different ways of doing things. Yet opinion surveys show that over half of the US’s population believe the Devil is real. Recent events such as 9/11 have re-enforced this belief. The Bush administration saw it in stark terms of a battle between good and evil. Bush’s 2002 State of the Union speech said “evil is with us and must be opposed”. It is a dualism that stretches back to Zoroaster. If the White House is to be believed, Angra Mainyu is still very much alive.
Posted by Derek Barry at 9:44 pm