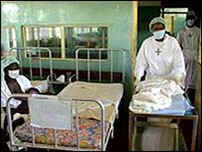 UN officials are desperately rushing in supplies and doctors to south-central Congo to contain a new outbreak of the deadly Ebola virus. More than 150 people have died so far in Kasai province and the World Health Organisation (WHO) is aware of another 372 cases. Congolese ministers are going on radio and television to educate villagers about the crisis. “We are extremely concerned,” said Dr. Benoit Kebela Ilunga, secretary general of the Congo Health Ministry. “But we also have experience dealing with this.”

Makwenge Kaput, Congo’s health minister, said the outbreak of the Ebola virus occurred at Mweka, a village outside the Western Kasai provincial capital of Kananga. The WHO regional office is supporting the Kinshasa health ministry in the field at the location of the outbreak. However the presence of dysentery in blood and urine samples is complicating diagnosis and treatment.

The WHO has confirmed the presence of Ebola virus in samples taken from cases associated with the outbreak after laboratory analysis at the Centre International de Recherches Médicales de Franceville (CIRMF), Gabon, and at the Centres for Disease Control and Prevention (CDC) in Atlanta. They are now sending Personal Protective Equipment (PPE) to the area and Médecins Sans Frontières (Belgium) has deployed clinicians, water and sanitation experts and logisticians to set up quarantine facilities.

Following the announcement of the outbreak, the Health Ministry of neighbouring Uganda has issued a red alert to all border posts. Although Kasai is 2,000kms away, medical experts say the threat of the virus spreading is serious. "We are always concerned that is why we have issued a directive to all border posts to be vigilant," said Dr Sam Okware, the Ugandan commissioner for health and chairperson for the Ebola Task Force. The last outbreak in Uganda in 2000 killed 160 people.

Ebola haemorrhagic fever (EMF) is one of the deadliest pathogens affecting primates, killing up to 90 percent of infected people. The virus is endemic to Africa and the Philippines. There is no known cure. In severe cases, victims haemorrhage and bleed from body orifices before dying. There are four identified subtypes (pdf) of Ebola virus. Three of the four have caused disease in humans: Ebola-Zaire, Ebola-Sudan, and Ebola-Ivory Coast. The fourth, Ebola-Reston, has caused disease in nonhuman primates, but not in humans.

Ebola is an animal-borne highly contagious virus that causes high fevers, diarrhoea, vomiting and often severe internal bleeding, has killed hundreds of people in Africa, where diets include primates. The virus is transmitted by direct contact with the blood, body fluids and tissues of infected persons. Transmission of EHF has also occurred by handling ill or dead infected chimpanzees. 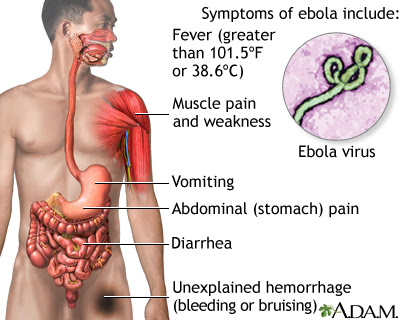 Although the disease is named after a river in the Congo, it was first recognised in a western equatorial province of Sudan in 1976. There it affected 284 people over half of whom died. A few months later, there was a second outbreak in Yambuku in Congo (then known as Zaire). 318 people were affected in the Congo and a staggering 88 per cent of those who contracted the virus died. There have been sporadic outbreaks, mostly in Africa, since that time.

The latest outbreak is the worst the world has seen for several years and is likely to have serious repercussions. It started three months ago when people started falling sick from a mystery virus in several villages around Kananga. Although several villages remain under quarantine, the WHO is saying there no need for any restrictions on travel or trade with the Democratic Republic of the Congo for now. That could change quickly with WHO warning of a “possible concurrent outbreak of another etiology [cause]".
Posted by Derek Barry at 7:53 pm