The leaders of Cyprus’s divided communities met yesterday for the first time in over 12 months in the UN buffer zone in the capital Nicosia. Tassos Papadopoulos, Greek Cypriot president, and Mehmet Ali Talat, Turkish Cypriot leader, held a three-hour meeting facilitated by a UN resident representative, Michael Moeller. Ahead of a Greek Cypriot election, the talks did not make great strides. However Moeller said the two leaders "agreed on the need for the earliest start for the process" and "discussed other issues leading to a comprehensive settlement." Negotiations have been stalled since Papadopoulos rejected a UN power-sharing plan in 2004 which the Turkish Cypriots accepted.

The latest talks were welcomed by British foreign minister David Miliband who currently visiting Turkey. He pledged London’s support for a lasting settlement that would eventually lead to Turkey’s accession to the EU. “We very much hope that those talks will be entered into with real openness and determination on both sides,” he said.

At the heart of Cyprus’s problem is the mistrust and political rivalry between the island’s two ethnic communities. 80 percent of Cypriots are Greek Orthodox while the remainder are Turkish Muslims. Both sides claims to the island are rooted in history. Cyprus has been part of the Hellenic world since about 1000 BC and part of the Ottoman Empire since 1571. Ironically the Ottomans restored the Greek Orthodox religion which had been suppressed by the previous rulers, the Venetians.

In 1878, the Ottomans reached a secret agreement with Britain called the “Cyprus Convention” to transfer power of the island to the British. In exchange the British agreed to pay an annual lease and supported the Ottomans during the Congress of Berlin which redistributed Bulgarian territories back to the Turks. In the face of public opposition, the British reneged on the tribute and the money was diverted to pay off Crimean war loans instead.

After Turkey’s defeat in World War I, Cyprus became a crown colony. Britain formally annexed the island in 1925. Rebels began a campaign to end British control. However unlike Ireland and India, the Cypriots did not by themselves constitute a nation seeking independence. Instead, they saw themselves as an unfree part of a nation which possessed its own state. Consequently, for the Greek Cypriots freedom was synonymous with the goal of “enosis” - union with Greece.

It was gradually recognised, however, that enosis was politically unfeasible due to the presence and increasing assertiveness of the island’s Turkish community (about 18 per cent of the overall population). Instead, Britain signed the Zurich-London Treaty which declared the independent Republic of Cyprus in 1960. After pressure from the Turkish minority, the 1960 constitution went to great length to grant both groups cultural autonomy and institutional power sharing within a common state. At the time of independence Greeks and Turks intermixed in towns and villages across the island; there was no territorial base to divide the country into Greek and Turkish zones.

The Turks had a guaranteed 15 out of the 50 seats in parliament, three out of ten ministers and extensive powers of veto. In 1963 a frustrated Greek Cypriot President Makarios proposed amendments to the constitution to change guarantees on the number of Turks in the military and the civil service and remove the Turkish veto power. The changes were strongly resisted by Turkish Cypriots became the catalyst for a decade long conflict between Greek and Turkish elements separated by a UN peacekeeping force. 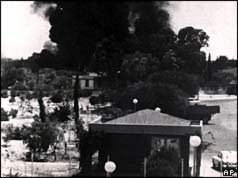 In 1974 the rightwing Greek junta arranged for the overthrow of Makarios and replaced him with a hardline Greek Cypriot government led by Nicos Sampson. Turkey feared this was a precursor to a Greek takeover and unilaterally announced a “peace keeping operation” to restore the constitutional order. They invaded the island and established control over the north. The invasion caused Greeks to flee south and Turks in the south to flee north fearing retribution. This ethnic cleansing resulted in a new entity called the Turkish Republic of Northern Cyprus (TRNC) which occupied 40 per cent of the island.

The international community condemned the invasion but the Turks were allowed to keep control. The TRNC has not been recognised by any country except Turkey which resettled peasants from Anatolia on the island to shore up its hold. The UN came in to police an 180km long middle ground known as the “Green Line” as positions hardened on both sides. The Green Line was up to 20kms wide and divided the capital, Nicosia, in two.

The (southern) republic of Cyprus joined the EU in 2004 after a 12 year waiting period. At the time, the European Council confirmed its strong preference for EU accession by a united Cyprus and insisted Greek and Turkish Cypriots to continue to negotiate with the objective of concluding a comprehensive settlement. However Cyprus was accepted into the union even though this clause was never realised. Talks in 2004 and again in 2006 failed to achieve the breakthrough.

Turkey also wants to join the EU by 2012 but Greece and Cyprus both insist it solve the Cypriot question before their application will be granted. However Turkey may turn this position to their benefit by agreeing to forego the TRNC in order to overcome Western apprehension of an Islamic country in the European alliance. In July 2005, Turkey included Cyprus in an expanded customs union with new EU countries offering preferential trading terms.

Issues to be resolved include the property rights of those made refugees by the 1974 invasion and the rights of minorities. The last time the two sides met was in July 2006, the two sides agreed to set up working parties to tackle issues affecting all Cypriots. They agreed on a twin-track process of technical and political talks. But none of the proposed groups has ever met.

The EU hope to implement a three part plan: Turkey to open its ports to Greek Cypriot shipping; Famagusta to be handed over from TRNC to the EU; and Varosha, the resort area of Famagusta, a no man's land since the invasion, would be handed over to the UN to allow Greeks to return. While these goals remain elusive, at least the sides are talking again. Tim Potier, assistant professor on international law and human rights at Cyprus's Intercollege, said the consequences of failure will only impact on the two communities and the island. "It's better for expectations to be lowered and the front door left open for further discussions," he said.
Posted by Derek Barry at 8:30 pm

Nice last photo. When did you take it?