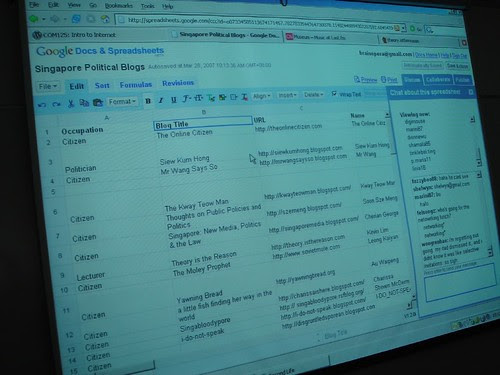 Woolly Days attended today’s session on “Politics and the Internet” at the Queensland State Library. Jose Borghino introduced the session with the speakers Christian Kerr, Greg Barns, Graham Young and Margaret Simons to follow. Borghino writes for New Matilda and lectures on Literary Journalism at the University of Sydney.

Borghino began by discussing the experiences of Kevin Anderson, the blogger-in-chief at the Guardian. Anderson discussed how during his time at the BBC they gained knowledge of the war in Iraq from Iraqi bloggers and how they also sourced local knowledge at the time of the Mumbai bombings and Kashmir earthquake. For these events the BBC relied on ‘citizen media’ with the technology to observe local events. Blogs have meant there is a quantum increase in the quantity of news but not the quality. Borghino said bloggers were ‘not real journalists’.

Borghino admitted the old media were in trouble. He quoted Philip Meyer, who based on extrapolations on current circulations predicted the last newspaper would appear in April 2040. Newsrooms had lost 20 percent of their staff in the last 20 years. Bloggers were now claiming the space left by journalists. The model is shifting away from a profession. Anyone with a digital camera could be a photo journalist. Every blogger aspired to be a journalist, making it part of the ‘psychological repertoire of the 21st century’. Rupert Murdoch predicted a bleak future for newsprint in the era of on-demand news and entertainment but also said “great journalism will always attract readers”.

But author of the Murdoch Archipelago Bruce Page said Murdoch’s plans don’t include investigative journalism. He said Murdoch’s vision of the future of journalism is a lot like fast food (easily packaged and readily available). Borghino said we are already well down this road with 40 percent of Murdoch’s papers’ stories relying on only one source, usually government or authoritarian. Democracy needs to see the hardhitting journalism of Watergate and Chris Masters. The challenge is to find a new model of journalism that allows this to prosper.

Christian Kerr spoke next. The Crikey journalist said the online daily email was now seven to eight years old and regularly faced the criticism that it is not as good as it used to be. Kerr’s answer was simply that the novelty value had worn off. Crikey still values new voices and breaks more new stories than any other online media in the country. He said blogs were yet to break a major story and blogging opinion in Australia was dominated by the same 250 or so voices. They sneer at the mainstream media in what Kerr called an ‘inverse snobbery’. Citizen journalists need to overcome this and take advantage of what the technology makes possible.

Kerr said the media has lost sight of its mission to inform in the face of commercial imperatives. He said the online Sydney Morning Herald was reduced to a ‘Lindsey and Paris’ role and the broadsheets most read article for two weeks was “Dwarf Penis stuck in Vacuum Cleaner”. It was lowest common denominator journalism.

Kerr harked back to his days as a political staffer for Robert Hill and said the hardest questions did not come from the likes of Laurie Oakes or the Canberra press gallery but from local newspapers. They had specific questions on specific issues he could not easily bat away. While bloggers could also fulfil this local role, the issue for internet journalists was how to make it pay.

Greg Barns spoke about how the rivalry between traditional and new media was changing and maturing. Barns brought up the case of Mohamed Haneef. The Haneef case was an hour-by-hour development for a couple of weeks. Barns said he wrote commentary on the legal issues that were unfolding which he was familiar with from defending a terror laws case in Melbourne.

Barns worked closely with Australian journalist Hedley Thomas whose good contacts with police and Haneef’s defence team gave him the lead in the story. Barns wrote immediate commentary based on Thomas’s reports which were published in Crikey that day. Barns saw this as addressing the gap between news which was published on the first day and informed opinion which was not published until the following day. The fact that Barns could publish opinion within an hour of Thomas’s reports was a synergy between old and new media which were doing very different jobs.

Graham Young spoke next. Young is chief editor and the publisher of e-journal On Line Opinion and a former vice-president and campaign chairman of the Queensland Liberal Party. Young said On Line Opinion has been going for seven or eight years and was set up to achieve things that couldn’t be done using traditional media. They are still experimenting with citizen journalism for the next election with limited government funding and a mandate to publish their findings in academic journals.

Young asked the question why was political opinion worse in Australian blogs than overseas. He quoted the Drudge Report, the Daily Kos and the Huffington Post as examples of the US blogosphere’s rude health. Young also cited an online organisation in Korea that claims to have 50,000 citizen journalists and was credited with bringing down the government in the next to last election. In the UK, the BBC and the Guardian lead the on-line field while bloggers were first to debunk the Government claim that the London bombings were an accident.

Young said that that in Australia key old media players such as the Sydney Morning Herald and the ABC dominated the field. Vested interests wanted to be protected from ‘disruptive technologies’ that would potentially destroy their returns on capital. Yet Young claimed that Australian bloggers had often beaten traditional media at their own game. He quoted the story about how Jennifer Marohasy refuted the Greenpeace claim their boat was rammed by Japanese whalers which was printed in the Age. Young concluded by disagreeing that newspapers would be extinct by 2040 but could not vouch for how healthy internet political reporting would be at that time.

Author and journalist Margaret Simons was the final speaker. Simons said we were at the end of the age of the media empires. Like any post-colonial era that meant things would be different and chaotic and not necessarily for the good but it also meant we could focus more on our own resources. But she acknowledged that the old emperors Murdoch and Packer at least cared about what they published. Murdoch supported the loss-making Australian for many years and the paper broke most of the stories that now embarrass the government. Packer supported the loss-making Sunday program. Now Channel Nine is owned by private equity which really doesn’t care about content.

The other big changes we are facing are technological: the rise of the internet and digital broadcasting. These lead to fragmented audiences and the question of how do you pay for journalism? Journalism is a skill involving the ability to find things out and that needed to be paid for to do it well. Simons described three business models. The Free to Air model demands big audiences to sell to advertisers. The Pay per View model is a user-pays model of which the purest is the book publishing business. The advantage of user pays is more independent and more varied content. The newest model is the gift economy based on free time and charitable donations.

Simons said that some of the analysis in the world of blogs is better than the mainstream media. She cited Mumble as providing better analysis of opinion poll data than the newspapers who commissioned the polls. Simons said we are living though changes that are equivalent to the age of Gutenberg. Almost anyone who wants to be a publisher can do so. No-one knows what that means in the long-term. Most of what will be published will be rubbish, but the question will be what is worth paying attention to? What blogs do better than the mainstream media is conversation. The challenge of the future will be to marry the strengths of the newsroom and the dirty work of investigative journalism with the power of the conversation of blogs.
Posted by Derek Barry at 10:12 pm

He has, also, translated into Portuguese the Wealth of Nations by Adam Smith.

He has been awarded several prizes.

Don't forget the name of this great author, you'll be hearing of him soon.


Please, add this blog to your favourites,


Thanks for visiting this new literary blog

This sculpture in the picture was made, in cement, by a great artist friend of mine, named Eugénio Macedo.