Two months of constant rain has caused severe flooding across the Sahel region of northern Africa which has wrecked hundreds of thousands of homes and left many people vulnerable to water-borne diseases. Over 150 people have died and 17 countries have been affected in West, Central and East Africa. Entire villages have been washed away by torrential rains along with crops critical to some of the world's poorest nations. "The rains are set to continue, and we are really concerned, because a lot of people are homeless, and infectious diseases could emerge”, said UN spokeswoman Elisabeth Byrs. “Some of the poorest countries, like Mali, Burkina Faso, and Niger… are badly affected”.

In Sudan, the worst floods in living memory have left 64 people dead and displaced and affected several hundred thousand, mainly in the troubled south, according to the UN. The World Health Organisation are reporting a cholera epidemic spread by floods which has killed at least 49 Sudanese in recent weeks. "The response is still ongoing,” said Maurizio Giuliano, spokesman for the UN's Office for the Coordination of Humanitarian Affairs (OCHA).”Most of the 200,000 plus people who were homeless at the end of August have by now been given shelter.”

In neighbouring eastern Uganda, nine people have died and 150,000 have been made homeless since early August. Another 400,000 subsistence farmers have lost their livelihoods after their fields were flooded or roads washed away. The rains are forecast to worsen in the next month. Uganda's Minister for Relief and Disaster Preparedness Musa Ecweru spent Saturday viewing the affected areas by plane. "The problem is getting worse by the hour," he said. “Access to some communities is almost impossible."

While heavy rains are not rare in eastern Africa at this time of year, it is more unusual in West Africa where contingency plans are not as well developed. The UN said severe floods across West Africa had affected 500,000 people in 12 countries, wiping out crops and homes there as well. Ghana has been hit badly by the flooding, with three northern regions being declared an official disaster zone after several towns and villages were submerged. Ghanaian Information Minister Oboshie-Sai Cofie said it was a humanitarian disaster. “People have nowhere to go,” she said, “Some of them are just hanging out there waiting for help to come." 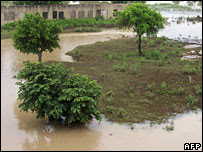 French military helicopters were helping relief efforts in nearby Ivory Coast, while officials in Togo were dealing with more than 60,000 displaced people and wrecked infrastructure. At least 17 people have been killed in the Savanes region of northeastern Togo. Una McCauley, UNICEF’s representative in Togo, said the death toll is likely to rise in the coming days as the rains continue. “About 60 thousand people still haven’t been accessed because their areas have been cut off,” she said. “The situation is quite poor because these are the same communities which have been touched by severe malnutrition.”

While African web sites and newspapers and the UN Information Network are filled with stories about the floods, the major English-language media in the West have mostly ignored this tragedy. But western disinterest in Africa’s problems is not new. When Mozambique suffered catastrophic flooded in 2000, Time reporter Tony Karon lambasted the lack of the interest in the west saying “forget about ‘ask not for whom the bell tolls…’ when it comes to a natural disaster in an impoverished African country, it takes some pretty gruesome images and a dramatic death toll before the industrial west even hears the bell”.
Posted by Derek Barry at 8:39 pm