Belgium on the verge of a nervous breakdown

Belgium is on the verge of a partition crisis as its French and Dutch components cannot agree on a government 100 days after the last election. The parties of the northern Dutch speaking Flanders cannot agree on coalition government with French-speaking Wallonia in the south. Not even the constitutional glue of the monarchy in the shape of King Albert II has been able to resolve the crisis. Albert has negotiated between the parties and ultimately asked would-be Flemish Prime Minister Yves Leterme to form a cabinet but all to no avail so far.

According to former nine times Belgian Prime Minister Wilfried Martens, the euro currency is partly to blame for the current impasse. Martens was prime minister for much of the 1980s when the Belgian franc was the country’s currency. He said the conflicts between Walloons and Flemish were just as bitter in his day but the fact they had their own currency lent urgency to seeking a resolution. Martens recalls being visited by central bankers from the Belgian national bank in 1981. "They told us all the time how they were having to intervene every day, billions at a time, to support the value of the Belgian franc," he said. But today’s crisis barely causes a ripple with the euro system which reacts more to problems within the American economy than the Belgian one.

Belgium was created in 1830 as a political compromise. 15 years earlier the predominantly Catholic Southern Netherlands (which had passed from Austrian to French control) was placed under Dutch control by the Congress of Vienna after the defeat of Napoleon. The new united kingdom of the Netherlands would act as a buffer state against any future French invasions.

But the area what was to become Belgium resented the domination of Amsterdam and King William I. It was mainly a matter of religion. Although the south had both Dutch and French speakers, they were both predominantly Catholic. And they resented the rule of the Calvinistic north. The Belgian revolution of 1830 began with a riot at the opera after a performance of La Muette de Portici set against the local uprising against the Spanish masters of Naples in the 17th century. After bloody street fighting in Brussels, the rebels declared a provisional government and proclaimed a constitution in 1831. Leopold I was installed as King of the Belgians in July that year. The Dutch invaded but were held up by a French force. The Dutch did not end their ineffective struggle to resume control until 1839.

In that year, the Treaty of London recognised Belgium as an independent and neutral country. The new country was dominated by a Francophone elite; the Dutch citizens of the north were second class citizens. Beyond the local squabbles, the wording of 1839 treaty would have long lasting repercussions as it bound Britain to guard the neutrality of Belgium. Britain would have to live up to the treaty in 1914 when Germany invaded. Belgium was a major battleground during that war with the battles of Ypres and Langemarck fought on Belgian soil. During the German occupation it declared Belgium an artificial creation and administratively separated Flanders from Wallonia.

The country was united again after the war. After World War II, Belgium became an administrative capital, becoming first the home of NATO and then the new European Economic Community in 1957. But its internal divisions never went away. For Belgium’s first 130 years, French-speaking Wallonia was the country’s economic powerhouse, the richest coal and steel-making area on the continent. The poorer inhabitants of mostly rural Flanders were largely excluded from power, and Flemish, the local version of Dutch, was looked down on by French-speakers as a peasant dialect.

But after the war Wallonia’s economy went into long-term decline, like other heavy industrial regions in Europe, while the Flemish population grew and the economy of Flanders boomed. Now there are six million Flemings and only four million Walloons, and the unemployment rate in Wallonia (17.6 per cent) is almost twice that of Flanders (9.3 per cent).

The prosperous Flemings mostly vote conservative, while poorer Walloons vote more to the left, and there are no political parties that appeal to both language groups. Since 1971 both communities have administered their own educational systems. Making a government always involves putting together parties from both sides of the language divide, and it is never an easy process. Flemish Christian Democrats won the most votes in the June election with 30 per cent of the Flemish vote and 18.5 per cent of the national vote. But Party leader Yves Leterme has been unable to form a new government. He wants more autonomy for Flanders but French-speaking parties are suspicious he wants to secede from Belgium. 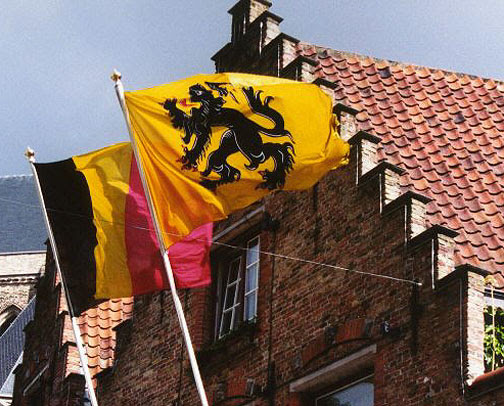 According to a recent opinion poll two-thirds of people in Flanders thought Belgium would not survive much longer as a unitary state. The biggest problem would be what to do with Brussels. The capital is a French speaking enclave within Flanders. Those in favour of Flemish secession are happy to allow Brussels become a European Union city but suggest that Wallonia itself will fragment into French, Luxembourgois and German components.

This view remains speculative while (according to a 2005 poll) 87 percent of all Belgians want the country to remain united. A thousand people took to the streets of the capital on the anniversary of the country's independence to march in favour of unity. One pro-unity demonstrator said "In Belgium, for the moment, we are in crisis. It's a pseudo-political crisis organised by lunatics. No more, no less. It's about power and will bring nothing but misery. Hands off Belgium!"
Posted by Derek Barry at 9:07 pm