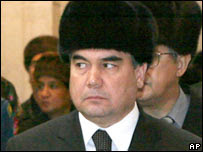 Turkmenistan expects to announce the result of its presidential election tomorrow. The Central Asian nation went to the polls on 11 February to elect a successor to the eccentric Sapermurat Niyazov who died in December without leaving an obvious successor. Acting President Gurbanguly Berdymukhammedov is favourite to win, however there are strong claims the election was rigged despite a 98% turnout. The high turnout is at odds with anecdotal evidence of sparse attendance at voting booths in the capital Ashgabat, and in the eastern Labap Province.

The 49-year old Berdymukhammedov is a former deputy prime minister and health minister. He has been de facto president for the last two months. As Niyazov's health minister, he was responsible for carrying out the former dictator’s decision to close all hospitals outside of the capital city. Although he has promised to honour Niyazov’s legacy (which does not bode well for the future of democracy in Turkmenistan) there is also evidence that he may be a progressive. He has also promised a series of reforms including media freedoms, education programs and most importantly opening up the key oil and gas sectors.

Under Niyazov, Turkmenistan was an unreliable exporter. He often cut off gas supplies to Russia during price disputes and signed a deal to supply energy-hungry China through a new pipeline due to come online in 2009 despite being currently over-committed to Russia. Whoever wins the election, will have to balance the needs of Moscow with the new contract signed with Beijing.

Khudaiberdy Orazov is a candidate in the presidential elections for the 'Vatan' opposition movement. He is a former central bank president of Turkmenistan who now lives in Sweden. He says the official turnout figure is not correct. He also claimed the elections were “unconstitutional” and accused the group of people around Berdymukhammedov as having organized a “defacto coup d'etat by conducting elections”.

Berdymukhammedov has unsurprisingly rejected these allegations. His most difficult task as president-to-be will be coming out of the shadow of Niyazov. He ruled Turkmenistan for 21 years and was the subject of a powerful personality cult. Known as “Turkmenbashi” (father of the Turkmen), he allowed only one political party, and allowed no press, TV or internet freedom. More bizarrely he shut down all the rural libraries and hospitals as well as renaming a month after himself and another for his mother. He was also accused of sequestering much of the country's wealth in a private bank account while his people starved.

It is likely his less-charismatic successor will keep a lower profile but will want to keep a tight rein on the sources of power and the media. An official announcement on the election result is due Tuesday local time with the inauguration ceremony for the new president scheduled for the following day.
Posted by Derek Barry at 7:44 pm

Ok firstly I want to say how sorry I am for intruding into your blogg and that my text has no relevance to your writings, I know that it is rude.. However I have my reasons, I am in debt by £9,000 and need to sort it out asap, please don't stop reading... Working all hours and spending all my spare time selling on ebay and trying to make money online, if I wasn't a happliy married woman then I would consider anything.... but I am as long as he does not find out about my mess.. So what I am trying to do it get everyone who visits my blogg to donate 1p-£1 whatever they feel they can or want too, and hopefully it won't take forever and a day... Hey if you are the witty one out there who can write a decent blog, unlike me, then maybe you could do me a feature on your blogg so that people can come visit.. Even free advice would be great anything... So please pop by and see me at http://makeumillions.blogspot.com/
P.S Only need 9,000 people to donate a £1 to hit the target, so got to check out 9,000 bloggs... ouch!

As expected, Berdymukhammedov won the election and was inaugurated Turkmenistan president today.