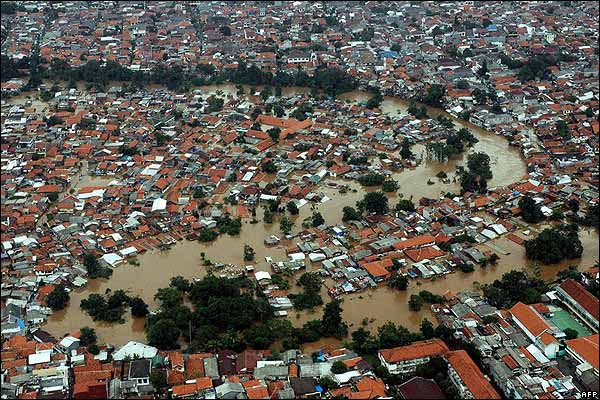 The Indonesian capital Jakarta has been inundated by rains and flooding that have so far killed at least 20 (the BBC is reporting 33 deaths) and made 350,000 people homeless. With rain forecast in Jakarta for the next two weeks, the situation is likely to get worse before it improves. A health ministry official said 20 people in Jakarta and suburbs have died as of Sunday afternoon, mostly either by drowning or electrocution. Homes, schools and hospitals have been flooded out paralysing transport networks and forcing authorities to cut off electricity and water supplies.

The rain started on Friday and has since been incessant on Jakarta and nearby hills. Government agencies are struggling to deal with the scale of the homeless. Some are staying with family and friends on higher ground and others are sheltering in mosques and government buildings. Jakarta Governor Sutiyoso has declared the “highest alert” after heavy rains in the upper areas around the city of Bogor (60km south) caused more rivers to burst their banks, sending three meter deep torrents of muddy water into residential and commercial areas of the city.

Flooding in Jakarta is not unusual, especially during the wet season of October to February. Forty percent of Jakarta, or 24,000 square meters, is on low land, and 78 areas are prone to flooding due to poor drainage. This time around, the floods have inundated not only the slums but also many middle-class residential complexes. The worst-hit areas are still submerged in three metres of water and in East Jakarta, water levels were recorded at six metres. In South Jakarta, flood victims tried to open the Manggarai floodgate to drain the water but city authorise refused. If the gate was opened half of Jakarta, including exclusive Central Jakarta, where ex-president Suharto lives, would be severely affected.

The state-run Antara news agency reported the flood water had reached close to the presidential palace and business centres in downtown Jakarta. Sutiyoso blamed massive development of luxurious villas and residential complexes in Bogor and Puncak, accusing the local government administration of sacrificing water-catchment areas for economic reasons. "The floods in Jakarta are partly due to environmental damage in Bogor," Governor Sutiyoso said. "The Puncak area is a water catchment but there are now many villas there, causing the downpour to run straight into the river." Antara is now reporting that Indonesian President Yudhoyono has instructed Sutiyoso to open the Manggarai sluice claiming there were no worries about floods reaching the State Palace. "For the sake of the people, the Jakarta governor is expected to open the sluice no matter if floods inundate the Palace," said Yudhoyono through a spokesman.

Water is not a new problem in Jakarta. The Dutch East India Company (VOC) arrived in Java in the 16th century. They built a walled city they called Batavia, near Jakarta Bay. It was to serve as the VOC capital for the next three centuries. The Dutch altered the cultural make-up of the city by bringing in non-Javanese slaves from present day Sri Lanka, Myanmar and Japan, supplemented by migrants from Europe, Arabia, India, and China. The Dutch built up their city with a series of canals and railways.

The current piped system of drinking water is ineffective being swamped by the continual growth of the city. 80% of Jakartans supplement their supply with underground water which has become steadily depleted. In low-lying North Jakarta, groundwater depletion has caused serious land subsidence, making the area more vulnerable to flooding. It also allows saltwater from the Java Sea to contaminate the coastal aquifers.

More than 2,000 millimeters of rain falls on Jakarta every year and there is rarely a year without floods. Jakarta's canals and rivers are now the major focus of the government's attention to control escalating environmental pollution levels. The Dutch made sure Batavia had a comprehensive and engineered network of rivers, drains and canals. But their canal system never fully managed to cope with the drainage problems and by 1846, almost a century before Indonesian independence, they were resorting to doing what they still do today - sorting out the problems only when floods occurred.

Old Batavia was built on marshland and much of the capital remains below sea level with weak drainage and major tides resulting in the outflow of rainwater slowing down. But environmentalists blamed the flooding on modern causes: years of bad city planning, which has led to building-work on green-field sites. This is the worst flooding in Jakarta since 1996 when at least 30 people were killed. The wet weather has also caused extensive flooding damage in the Borneo province of West Kalimantan, as well as large parts of East Java, including Indonesia’s second city, Surabaya.
Posted by Derek Barry at 4:43 pm