Following in the footsteps of such unlikely musical superstars as Jerry Springer and Roy Keane, the life and times of Margaret Thatcher has finally been set to music. The theatres of regional Britain are currently packing them in with a tour of “Thatcher – The Musical!” the life and times of the country’s most controversial 20th century Prime Minister set to music and comedy. It features an all-singing, all-dancing cast of ten women who croon their way to such standards as The Cabinet Shuffle, The Grocers Daughter and The Thatcher Anthem.

The idea is the brainchild of the Wolverhampton-based women's company Foursight Theatre. The show documents her rise from grocer's daughter to international stateswoman. The cast play eight different Maggies; the Grocer's Daughter, Twinset Maggie, Power Suit Maggie, Military Maggie, Britannia Maggie, Sacrificial Maggie, Broken Maggie and Diva Maggie, and also take turns as the men in her life husband Dennis, Ronald Reagan, Geoffrey Howe and Michael Heseltine. The musical ends with the line of Diva Maggie “"I am the iron in your bloodstream, I'm in your DNA!".

The last comment refers to Thatcher’s most well-known nickname; The Iron Lady. The moniker dates back to 1976. Then leader of the Opposition, she made her famous “Britain Awake” speech at Kensington Town Hall where she attacked the Soviet Union. In the speech she said “The Russians are bent on world dominance, and they are rapidly acquiring the means to become the most powerful imperial nation the world has seen. The men in the Soviet politburo don't have to worry about the ebb and flow of public opinion. They put guns before butter, while we put just about everything before guns.” The Soviet Defence Ministry newspaper Red Star picked up the speech and called her the “Iron Lady”. The label was popularised by Radio Moscow and Thatcher herself quickly saw its advantages.

Thatcher was always steeped in politics. Born in 1925, she was the daughter of a grocer and Methodist lay preacher Alfred Roberts who was a local independent councillor of Liberal sympathies. She was educated at Oxford where she graduated in chemistry in 1947. She was elected president of the student Conservative Association at Oxford and made herself known to the leadership of her party at the time of its General Election defeat of 1945. She worked as a research chemist at J Lyons and co where she was a member of the team that developed the first soft frozen ice cream.

In the early 1950s she ran and lost elections in the strong Labour seat of Dartford though she did considerably cut the majority both times. She also won national publicity as the youngest female candidate in the country. There she met a local businessman Denis Thatcher. They married in 1951 and had twins, Mark and Carol, two years later. Denis went on to a successful career in the oil industry and became a director of Castrol. He funded his wife’s training as a lawyer, specialising in taxation. Finally she found a safe Tory seat and was elected to Parliament in 1959 as MP for the London seat of Finchley.

Two years after election Margaret was appointed Parliamentary Secretary for the Ministry of Pensions, a position she held until Labour won the 1964 election. In opposition, she was a Ted Heath supporter and was eventually rewarded with a role in the shadow cabinet in 1967. When Heath won power in 1970, Thatcher was appointed Education secretary and was charged with reducing the budget. Her immediate decision to abolish free milk for 7 to 11 year olds in state schools led to the cry of “Mrs. Thatcher, Milk Snatcher”. Despite protests from Labour councils, Thatcher got her way and the cuts saved £14m a year.

Heath lost to Harold Wilson again in 1974 and Thatcher was named shadow environment secretary. After he lost a second election later that year, the party held a leadership ballot. Thatcher surprisingly pipped Heath’s preferred successor William Whitelaw to become Britain’s first female party leader. Thatcher slowly won over the party to her views and sat back and watched as the Labour government unravelled, finally collapsing after the widespread strikes in the 1978-9 Winter of Discontent.

The Conservative Party won the 1979 election with a margin of 44 seats. Thatcher had a mandate for change but her first two years in office weren’t easy with unemployment remaining stubbornly high and economic improvement slow. Bobby Sands led an IRA hunger strike in the Maze Prison in 1981 in which he and 9 others starved to death. Despite criticism by the European Commission of Human Rights and the Irish Government, Thatcher maintained a public hardline attitude saying "Crime is crime is crime. It is not political." Behind the scenes however, Ulster Secretary James Prior did manage to negotiate a package of concessions with the surviving Maze prisoners.

Domestically, Thatcher increased interest rates and VAT. But with an election looming and defeat likely, salvation came for Thatcher with the Falklands War. The Argentinean junta, looking to deflect attention from their own domestic woes invaded the South Atlantic islands in April 1982. Riding a wave of nationalist sentiment, Thatcher launched a naval task force to reclaim the islands. After the sinking of the light cruiser General Belgrano, the Argentinean fleet retired to port and left the islands open for re-capture. British forces stormed the islands in May and took three weeks to take the capital Port Stanley. Despite the deaths of 255 British troops, Thatcher’s popularity was boosted and she romped home in the 1983 election.

Aided by a Labour split, Thatcher won that election in a landslide increasing her majority by 100 seats. Her next term was marked by battles against the union movement. The National Union of Mineworkers (NUM) launched a massive strike in 1984 to protest proposals to close a large number of mines. Thatcher was ready for them. She insisted that coal stocks were built up to avoid politically sensitive electricity cuts. She increased Police powers and rushed anti-union laws through parliament. Former political commentator Brian Walden described the miners' strike as "a civil war without guns". Eventually she wore down the miners, split their leadership and forced them to concede defeat after a year of picketing.

The IRA came back to haunt Thatcher in October 1984. The Prime Minister was staying at the Brighton Grand Hotel on the eve of both her 59th birthday and the annual Conservative Party conference. The IRA detonated two large bombs in the hotel at 3am, one of which tore through her bathroom barely two minutes after she had used it. She and husband Denis escaped injury, but five others including a Tory MP were killed and many were injured. The following day the IRA responsibility with the chilling message “Today we were unlucky, but remember we only have to be lucky once. You will have to be lucky always.” Thatcher meanwhile spoke to the conference as scheduled at 9:30am that morning.

Economically, Thatcher maintained her fervent belief in the power of the markets. She started to sell off the large state utilities and council homes to their residents. She abolished the large city councils including the Greater London Council as these were all controlled by Labour. With the country in the middle of an economic boom, she had another comfortable election victory in 1987 with a slightly reduced majority. Towards the end of her regime, the chemist in her returned as she started to champion environmental issues. She began to discuss the issues of global warming, ozone depletion and acid rain. At the 1988 conference she told the party "No generation has a freehold on this earth. All we have is a life tenancy- with full repairing lease. This Government intends to meet the terms of that lease in full". 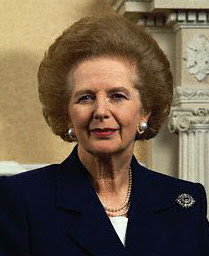 But with the economy starting to stall again, her popularity declined. She fell out with her foreign secretary Geoffrey Howe and Chancellor Nigel Lawson over EU monetary union. In 1990, her new system to replace local government rates by the deeply unpopular “poll tax” proved to be her biggest mistake. With interest rates running at 15%, Howe resigned and precipitated a party leadership ballot. Michael Heseltine ran against her but the first ballot was inconclusive. Before the second ballot, Thatcher decided to resign. She supported John Major as her successor who went on to retain power in 1992.

That same year, she was appointed to the House of Lords as Baroness Thatcher. She continued to have a high public profile and spoke out on many issues of the day. She famously supported Pinochet during his incarceration in London in 1998. By then Labour had finally ended the Tory stranglehold on power by moving to the middle of the political spectrum. When Margaret Thatcher celebrated her 80th birthday in 2005, her old colleague Geoffrey Howe said "Her real triumph was to have transformed not just one party but two, so that when Labour did eventually return, the great bulk of Thatcherism was accepted as irreversible". But there was nothing left to do for Thatcher herself – except, of course, to make the musical.
Posted by Derek Barry at 7:39 pm