In a new opinion poll published yesterday, Nicolas Sarkozy stretched his lead to eight percentage points ahead of his French presidential rival Segolene Royal. It is an increase of two points since the previous poll a fortnight ago. The first round of the presidential election is due on 22 April with the likely run-off two weeks later.

As things stand, the pollsters Ipsos predict that Sarkozy, the official candidate of the ruling centre-Right UMP party, would end up with 35% of the vote in the multi-candidate first election. He would need 50% to win the election outright on the first vote. On the current polls, the Socialist Party candidate Royal would finish second with 26% allowing her to contest the May runoff election against Sarkozy. This would at least avoid the disaster of 2002 when the far-right candidate Jean Marie Le Pen edged out the Socialist candidate and then-Prime Minister Lionel Jospin by one percentage point in the first round. Le Pen was unsurprisingly trounced by incumbent president Chirac who won 82% of the vote in the run-off election.

Although Le Pen is running again in 2007, the left, which represents over 40% of the French electorate, are determined not to repeat the same mistake this time round. In 2002 their votes were diluted across a number of candidates none of whom were particularly strong with Jospin being an unpopular Prime Minister. This time round, Royal is the clear favourite to lead from the left and remains a good chance to become France’s first ever female president despite dropping behind Sarkozy in recent polls.

In September 2006, Segolene’s brother Antoine told the Parisien newspaper that another brother Gerard was a member of the French intelligence squad who planted the bombs that killed a crew member on the Greenpeace flagship Rainbow Warrior in Auckland in 1985. "At the time Gerard was a lieutenant and agent of the DGSE [intelligence agency] in Asia” said Antoine.

Nonetheless the news has not affected the family's political daughter. Segolene Royal was born in 1953 in Dakar, Senegal. She was one of eight children of Helene Dehaye and Jacques Royal, who was a former artillery officer and aide to the mayor of Chamagne in Vosges. Segolene had a troubled relationship with her sexist father and had to cajole him to allow her to attend high school. Aged 19, she sued him because he refused to divorce her mother and pay alimony and child support to finance the children's education.

Royal eventually graduated from the École Nationale d'Administration (ENA), France’s leading school for political appointees. In the late 1970s she met fellow Socialist politician Francois Hollande who also qualified from the ENA. They settled together and had four children. Segolene initially worked as a judge of an administrative court before working on the staff of then president Mitterand’s special adviser Jacques Attali. She won a seat in the national assembly in 1988 and was promoted to Environment Minister in Pierre Beregovoy’s administration in 1992. Under Lionel Jospin, she served in the education and family ministries in the early 2000s. In 2004 she was appointed regional premier of Poitou-Charentes province which she used as a platform for the presidency.

Aged 22, Sarkozy entered politics and became a city councillor in Neuilly-sur-Seine, a wealthy Paris suburb. He joined the Gaullist party and rose to become mayor of his town. In 1988 he was elected into the National Assembly and was promoted to Minister of the Budget in the Edouard Balladur administration of 1993. In his early days he was seen as a protégé of Jacques Chirac but supported Balladur in the 1995 presidential election. Sarkozy was ostracised after Chirac’s victory and spent a few years in the wilderness. Chirac eventually forgave Sarkozy and appointed him Interior Minister after his second presidential win in 2002.

In November 2004 Sarkozy was appointed leader of the UMP with 85% of the vote. Since then he has become a major political figure as he became the increasingly obvious choice to replace Chirac. Sarkozy sharply divided opinion in France by adopting a tough stance on immigration. In 2005 he described young delinquents in the Paris suburbs as "racaille" (rabble). However he has also advocated positive discrimination to help reduce youth unemployment. 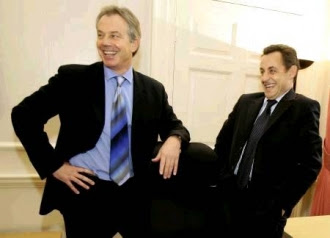 Sarkozy's campaign for presidency has supposedly been helped by Royal’s gaffes. These mistakes include praising the speed of the Chinese justice system and approving the independence of Quebec. Until Royal gets beyond the impression she is a novice in the sphere of foreign affairs she is destined to sustain a heavy defeat at the hands of her right wing opponent. In the absence of a new bete noir between now and May, Nicholas Sarkozy will be the next president of France.
Posted by Derek Barry at 11:16 pm