One of the world’s oldest surviving cargo cults is celebrating its golden anniversary in Vanuatu this week. Yesterday was the fiftieth anniversary of John Frum Day on the remote island of Tanna in the South Pacific nation of Vanuatu. The movement worships a mysterious spirit that urged them to reject the teachings of the Christian Churches and maintain their traditional customs.

15 February is John Frum Day on Tanna. The day celebrates a cultural hero who would come from across the sea bringing wealth in abundance. John Frum was a 'mysterious little man with bleached hair, high-pitched voice and clad in a coat with shining buttons.' John Frum issued moral injunctions against idleness, encouraged communal gardening and co-operation, and advocated dancing and the drinking of kava.

The “John Frum” movement dates back to World War II when US forces landed weapons, food and medicine on the island. In what was then the New Hebrides, 300,000 US troops landed to fight the Japanese. The size, wealth and power of the Americans deeply impressed the natives. But they were also impressed by their egalitarianism. Uncle Sam became a mythic figure who would empower the island peoples by giving them cargo wealth.

The name John Frum originates from John "from" America. John Frum is identified either as a god who lives in the crater of Tanna's highest mountain with his army or the 'king of America'. “John promised he’ll bring planeloads and shiploads of cargo to us from America if we pray to him,” said a village elder. In 1957 an American warship called the Yankee, called at Tanna. The ship’s commander explained to the crowds that there was no person with the name John Frum in America. But the locals wouldn’t believe him and dismissed the commander as "a false American."

The Tannanese suffered the curse of missionaries and were declared converted to Presbyterianism in the early years of the 20th century. Prior to World War II, a movement emerged to re-establish traditional values in Tanna. When the Americans arrived it gave their religion new meaning. 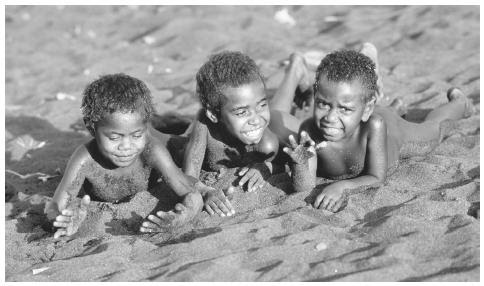 Anthropologist Kirk Huffman, who spent 17 years in Vanuatu, told The Smithsonian “You get cargo cults when the outside world, with all its material wealth, suddenly descends on remote, indigenous tribes.” According to a village elder “John promised he’ll bring planeloads and shiploads of cargo to us from America if we pray to him. Radios, TVs, trucks, boats, watches, iceboxes, medicine, Coca-Cola and many other wonderful things.”

But why wait for someone who never seems to come? David Attenborough, one of the first foreigners to "discover" the John Frum movement, asked the Tannanese that question when he visited the island in the early 1960s. "Is 19 years a long time to wait?" one of the islanders reportedly replied, "You have been waiting for 2,000 years for Jesus Christ."
Posted by Derek Barry at 11:21 pm