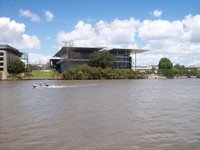 The fifth Asia-Pacific Triennial (APT5) exhibition is the highlight of Brisbane’s newest attraction, the sparkling Gallery of Modern Art (GoMA). There have been more than half a million visitors to Southbank’s Cultural Centre is since the $300m GoMA and the adjacent State Library of Queensland opened on 2 December last year.

Wayne Goss, Chairman of the Queensland Art Gallery Board of Trustees said in a media release that GoMA was a major new contemporary art museum for Australia and the Asia-Pacific region, and a cultural triumph for Brisbane. “With the addition of GoMA, Queensland Art Gallery remains a single institution with two magnificent sites: the celebrated Robin Gibson-designed Gallery, which opened in 1982, and the Architectus-designed Gallery of Modern Art at Kurilpa Point, the last reach of the Brisbane River overlooking the city," he said. The two galleries are only 150m apart.

APT4 drew 220,000 during its 20-week exhibition in the old art gallery in 2002. This year's APT has reached almost half that in its first three weeks. The attendances and the architectural brilliance have been attracting envious glances from other gallery. GoMA director Doug Hall is due to leave his role in April and National Gallery of Victoria acting director Frances Lindsay said that whoever gets the job next would have “big shoes” to fill. National Gallery of New South Wales chief curator Tony Bond said "We can't get anything like that in NSW. Queensland…have managed to build something to die for”.

Although APT5 has been criticised for not having enough local exhibits, it does contain a stunning range of modern art. The beautiful high ceilings and spacious rooms of the gallery with river and city views complement the artwork. One of the first exhibits as you climb to the first floor, and one of the most popular, is a montage of 29 sequences from Jackie Chan movies. Chan leaps operatically at the viewer from all angles on a bank of TV screens, big and small. GoMA's head of cinema Kathryn Weir describes Chan as a "complex local-global phenomenon". She says his presence in APT "explores how someone who is out of Hong Kong is possibly one of the best-known actor-directors today, working in Hollywood but also maintaining a very strong local identity. And also with a strong and complex relationship with a traditional Chinese art form." 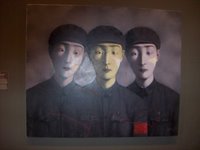 Next to the Chan exhibit is a striking picture from Chinese artist Zhang Xiaogang. His oil on canvas picture “Three Comrades” is from his Bloodlines: The Big Family series. His three comrades are deliberately androgynous figures. Born in 1958, Xiaogang grew up during Mao’s Cultural Revolution when the fervour of disowning the past meant that many photos were destroyed or lost. The painting “Three Comrades” is inspired by a rare surviving photo of his mentally-ill mother during younger, happier times. It conjures up the three Chinese ‘big families’ of blood, social and cultural ties.

The Chinese influence on APT5 is massive. Near the river end of the gallery, lie the beautiful porcelain sculptures of Ah Xian and the photographs of Australian born William Yang. Yang tells a poignant story “about my mother” in 24 family photographs. Like Yang, his mother was also born in Australia, in Dimboola in Far North Queensland. She is a Cantonese who marries a Mandarin speaking Hukka. The family grows up speaking English only. The 24 photos show the life of a graceful westernised woman (the christmas dinner was turkey and ham). She dies but not before having to cope with the shock of finding out her artist son William is gay.

There is a queue to see the exhibit of Japanese artist Yayoi Kusama. Kusama was responsible for the beautiful “Narcissus Garden” in APT4. This time, her piece is called “Soul under the Moon”. It is a playful installation set in a closed dark room. Kusama uses mirrors, lights, water, plastic, nylon thread, timber, synthetic polymers and paint to create a disconcerting illusion of never-ending space. Its themes are reflection, infinity and repetition.

Also impressive is Jitish Kallat’s “public notice” (2003). Kallat was born in Mumbai in 1974 where he was also trained as an artist. He has gained a reputation for bold figurative paintings. “Public notice” is a five-panelled work using acrylic mirrors. The letters are rubber adhesive cement which are ignited and melted. The text is from the speech delivered by Jawaharlal Nehru at midnight on the occasion of Indian independence from British rule on 15 August 1947. Nehru’s “tryst with destiny” speech remains a important historical milestone for India. 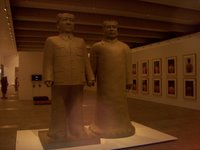 Back on the ground floor the highlight is another Chinese sculpture. It is Wang Wenhai’s “Mao Zedong and Mao Zedong”. These are two giant fibreglass sculptures of Mao; one as the familiar chairman, the other in the guise of emperor Qin Shi Huang who united China in 221 BC. Wenhai is a staff member at the Yan'an Revolutionary Museum in Northwest China's Shaanxi Province. He has been making clay sculptures of Mao for 20 years and believes he has made over 1,000. The two that grace APT5 are imposing as befits one of the 20th century's most successful leaders.

The Asia Pacific Triennial 5 expo continues until 27 May 2007. The Queensland Gallery of Modern Art is at Southbank, a short walk from the city across Victoria Bridge and close to South Brisbane station. It is open 10am to 5pm Monday to Friday and 9am to 5pm Saturday and Sunday. Admission is free.
Posted by Derek Barry at 8:32 pm