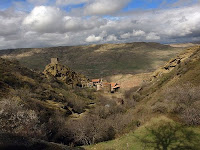 A new report has blamed both sides for the war between Russia and Georgia last year over the breakaway province of South Ossetia. 800 people died, several thousand others were wounded and 100,000 people became refugees in the conflict. The report of the war in the Caucuses last year was commissioned by the Council of the European Union using 30 European military, legal and history experts. Sadly, it says, the fighting did not end the political conflict nor were any of the issues that lay beneath it resolved (photo of Russian-Georgian border by opendemocracy).

The report was the result of an independent EU fact finding mission undertaken three months after the war. Its terms of reference were to investigate the origins of the conflict particularly in regard to issues of international law, humanitarian law and human rights. The inquiry is the first of its kind under the auspices of the EU and was conducted by a core team of three led by Swiss Ambassador Heidi Tagliavini.

The conflict has deep roots in the region with a long history of hostility and suspicion between the different national traditions of the area. Soviet federalism hid the hatred for 70 years but the chaos that followed the break-up of the USSR added to the mistrust. Georgia grew in assertiveness after the Rose Revolution of 2003 displaced the rule of former Soviet foreign minister Eduard Shevardnadze Meanwhile Russia held a policy of a privileged “near abroad” where it did not easily accept events deemed detrimental to its interests.

International peacekeepers had patrolled the troubled autonomous provinces of South Ossetia and Abkhazia since the mid 1990s but a general lack of interest prevented these forces from being effective. Georgia inherited the two provinces as part of the old Soviet republic of Georgia but both felt alienated by nationalism in the new independent country.

In 2004 the newly elected Georgian President Mikheil Saakashvili requested to join NATO while increasing military spending from 1 percent of GDP to eight. The US gave its support with military aid and Bush’s “beacon of liberty” speech in 2005. These actions did not go down well in Moscow.

Russia supported the independence of the two republics but was not supported by international law. Recognition of breakaway entities by a third country is deemed unlawful interference in the sovereignty and territorial integrity of the affected country according to Principle I of the Helsinki Final Act. Russia added to the hostility by conferring mass citizenship on South Ossetian and Abkhazian citizens.

In 2008 tensions mounted further as both sides flew jet fighter and unmanned flights over the ceasefire lines. Russia brought more troops into the area and both sides exchanged fire on the South Ossetian border. In July-August both sides carried out large military exercises and South Ossetia started to withdraw its civilians to Russian territory. The stage was set for all-out war which began on 7 August when Georgia attacked the Ossetian town of Tskhinvali.

The official reason for the attack is confused. The military leader claimed it was aimed at restoring Georgia’s constitutional borders but this was later revoked by Tblisi as “unauthorised”. The real reason, said the government, was a “defensive operation” response to a Russian attack. However the Russian counter-attack did not begin until a day later.

But when it did arrive it was devastating. In the next five days, Russian ground troops supported by the Navy chased the Georgians out of South Ossetia and into Georgia proper. They set up military positions in a number of Georgian towns, including Gori, Zugdidi, Senaki and Poti. Hostilities concluded after Abkhaz units supported by Russian forces seized territory in the upper Kodori Valley.

Russia said its military actions in Georgia were a “peace enforcement operation” while Georgia called it an “aggression”. The international community refused to take sides other than call for an end to the fighting. On 12 August then-EU president Nicolas Sarkozy went to Moscow and Tblisi where he hammered out a six-point ceasefire plan. Russian forces ignored the ceasefire for several days before withdrawing into South Ossetia and Abkhazia after 22 August.

The counter-attack on Georgia was not “remotely commensurate” with the original incident and had no humanitarian or genocide justification. Georgia had the right to act in legitimate self-defence under Article 51 of the UN Charter. In a matter of days, says the EU, the pattern of legitimate and illegitimate military action had been turned on its head.

The report recommended Georgian constitutional reform as a long-term solution to the problem. This would mean a meaningful degree of autonomy of Abkhazia and South Ossetia within a federal Georgia. Up to now such discussions have stalled on Georgia’s refusal to countenance secession powers for the federated states. The report also recommended the building of more mutual trust and bilateral co-operation and an end to the creeping Russification of the two breakaway provinces. Russia was no longer an honest broker, it said, but more concerned with its own strategic interests.

The report concluded that the situation is now even more difficult that it was before the war. There were no winners in this conflict and relations between Russia and Georgia are at an all-time low. Worse still, it threatens to destabilise the entire region. The international community could do more to get negotiations started but it requires a willingness of Russia and Georgia to solve the problem. “This needs to be done now,” ended the report.
Posted by Derek Barry at 12:24 am

There are most certainly winners after the august 2008 war. Those winners are the South Ossetian and Abkhaz people. They have lived under an ultra nationalistic regime that gave them no rights whatsoever for decades. The never wanted to be part of Georgia when Stalin forced them to, and they tried desperately to get out of it when Georgia became independent. Both had to tolerate 3 genocide attempts. They have been lured every time the Georgian government seamed to reach out to them. There is no trust left between the Georgian government and Georgia’s minority population. Saakashvili made it clear august 2008 that they are not wanted in Georgia. Thankfully Russia (though they clearly have other intensions with their actions) now made an end to it ones and for all. Both regions are under full protection from the Russian army. If Saakashvili tries to lay his finger on the Ossetian and Abkhaz people one more time he is done. Georgians themselves are kidnapped by a NATO-puppet, who’s only mission was and still is to please USA, NATO and EU. He forgets that his own people, the Georgians, live under extreme poor conditions. Conditions that are so easy to improve if he shifted focus from military build-up to economical injections in industry and trade. Georgia is a beautiful country full of possibilities. People could have had a rich and great future if it wasn’t for international hypocritical politics.