Byron and beyond: A northern NSW photoessay

An hour and a bit's drive south of Brisbane lies the Laser lighthouse. The lighthouse is on the border between Queensland and NSW on the tip of Point Danger in Tweed Heads, NSW just a stone's throw up the hill from Coolangatta, Qld. The Captain Cook Memorial lighthouse was the first of its kind commissioned in those go-ahead development days of 1971. But the laser technology was unsuccessful and it returned to using more conventional mirrors four years later. 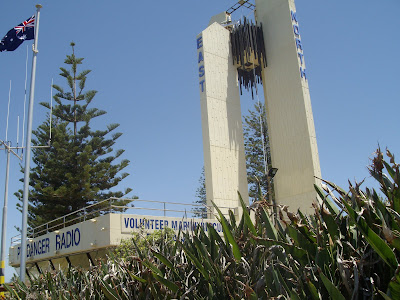 This is the mouth of the Tweed river just south of the lighthouse. The Tweed is not quite on the border but in most people's mind is the definitive line where Cockroaches end and Canetoading begins. The river begins out of the massive caldera of Mt Warning which blew its enormous stack 23 million years ago. 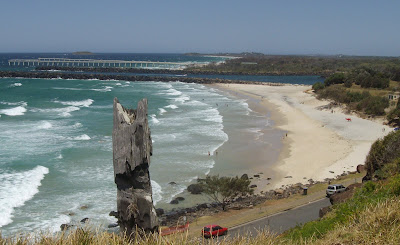 Another 80km or so south is Byron Bay. The population is supposedly 5,600 but the tourist traffic makes it seem a lot busier than that. A long-time Aboriginal settlement, Captain Cook gave it its decidedly English name in 1770 when he found safe anchorage at what he called Cape Byron. This Byron was John Byron a fellow English sailor who had circumnavigated the world. He was the grandfather of the more famous poet Lord Byron. 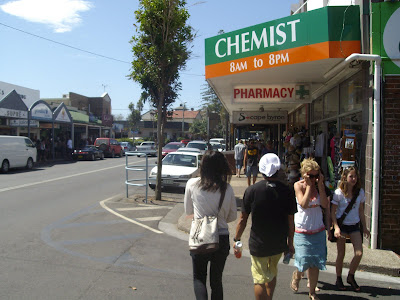 Today Byron is a compulsory stop on the backpacker route north from Sydney. Most people come for the beachlife and the renowned surf. 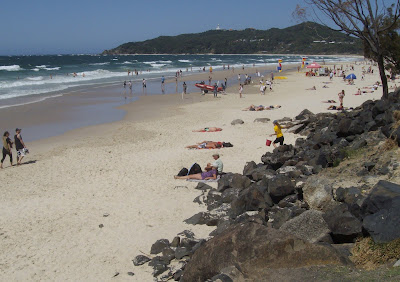 Byron's most prominent feature is the white lighthouse built in 1901 at the most easternly point on the Australian mainland. 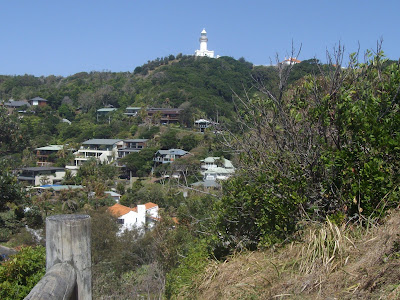 Captain Cook also named Julian Rocks in a later voyage in 1776. He named the two main peaks for his nephew Juan and niece Julia. They are the remnants of an ancient volcanic eruption more than 20 million years ago. They were established as a marine reserve in 1982 after 10 years of lobbying. The Rocks are one of Australia's top dive spots and a marine reserve providing shelter and food for more than 500 tropical and temperate fish species. 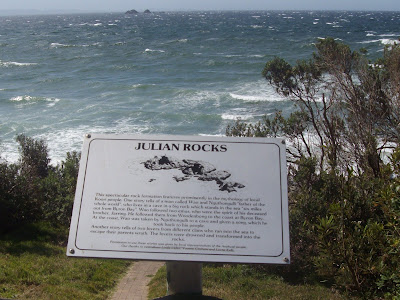 This precariously placed fisherman is hoping some of Julian Rocks marine life has strayed close to the mainland. 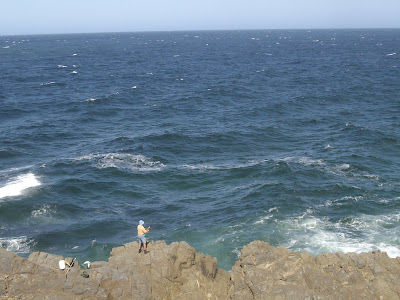 Cape Byron Lighthouse was built in 1901 (year of Australian federation) out of prefabricated concrete blocks in the style of New South Wales colonial architect James Barnet, by Barnet's successor, Charles Harding. The 8-ton optical lens was made by the French company, Societe des Establishment, Henry Lepante, Paris and contains 760 pieces of highly polished prismatic glass. The light is Australia's most powerful. 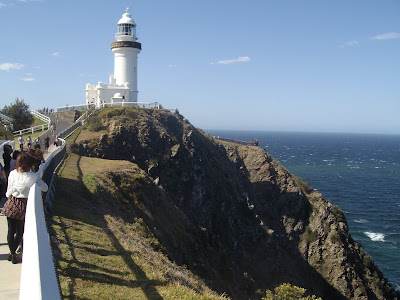 The beautiful Tallow beach lies due south of Cape Byron facing eastwards into the endless Pacific. 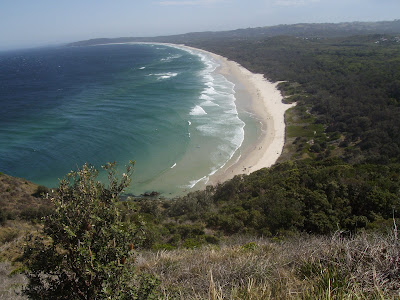 This is the view looking back northwards to Cape Byron from a mostly deserted Tallow Beach. 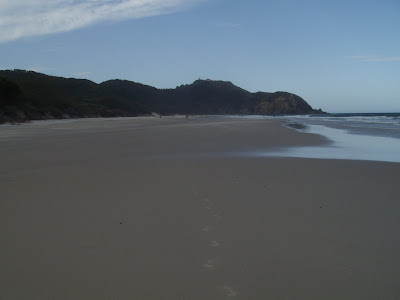 About 20kms further south is Lennox Head. This is the view to the township and Seven Mile Beach from Pat Morton lookout south of town. 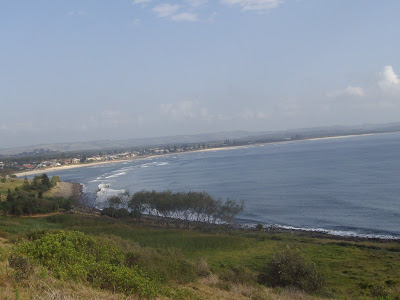 This is the view south of Pat Morton looking towards Skennars Head. 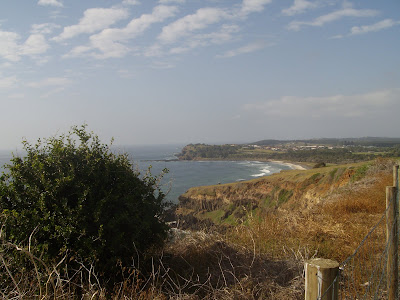 This is Lennox Headland from the town of Lennox Head. It was formed from the same eruption (or one of them) 20 million years ago that carved out Mt Warning. 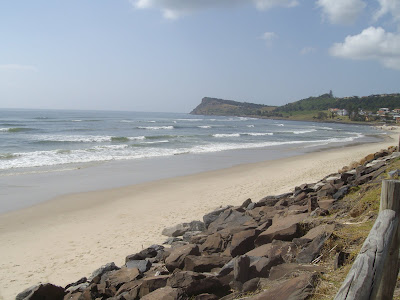 Enjoying the view of the Richmond River as it empties into the ocean at Ballina (just south of Lennox). 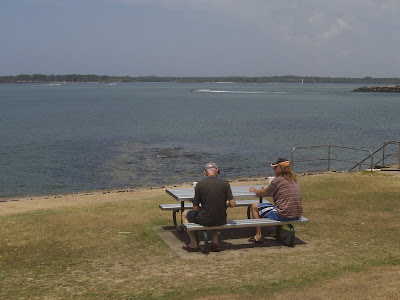 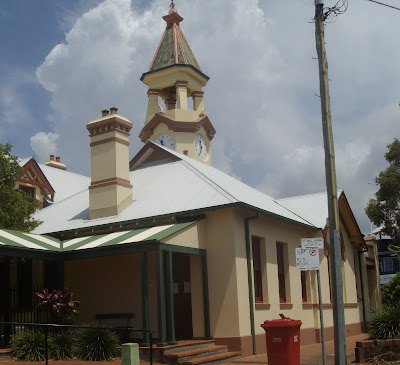 A view of Mt Warning itself from the Murwillumbah-Nerang back road. Because of its height and proximity to Byron, Mt Warning gets the first light on mainland Australia. Cook named this too in 1770 as a "remarkable sharp-peaked mountain lying inland" that alerted him to the dangerous reefs near Fingal Head. 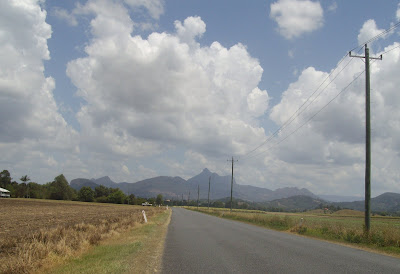 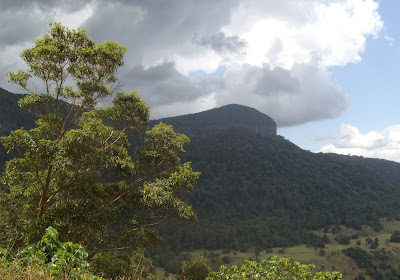 The border post on the lightly-used Murwillumbah-Nerang back road. 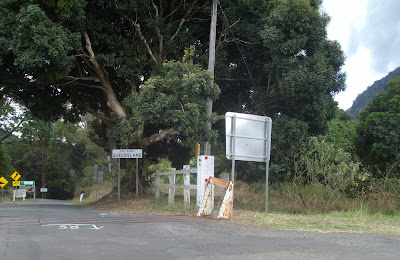