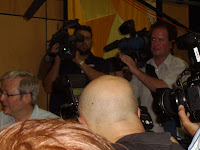 Outgoing Australian Press Council chair Ken McKinnon has used his final annual report (pdf) to blast News Ltd newspapers for poor editorial standards and over-reliance on stories with single sources. McKinnon also took a swipe at the industry for its APC budget cuts and the view that its work could be replaced by the Right to Know Coalition. McKinnon has now finished up after nine years and hands over a reduced council to new chair Julian Disney. Disney will work with a fifteen-member board (down from 22 but more than the 12 the industry wanted) but the fact that funding is still tied to industry approval may mean his independence is undermined. (photo by Derek Barry)

Margaret Simons in Crikey thinks that this may be the start of a new battle between the industry and its regulatory body. She says the annoyed public committee members chose the “social activist and reforming lawyer” Disney to counteract the arrogance of News Ltd which is pushing the Right to Know Coalition alternative. Simons says the other issue is the power of News Ltd editors. Although these editors understand the business of news, they tend to be arrogant and gung-ho leading to many errors of judgment. “The Press Council is far from perfect,” said Simons. “But how bad does it look for the industry to back away from even its gently-gently approach, while also arguing for reduced government intervention?”

This is not the first time that this has happened. The notion of a press council dates back to the American Hutchins Inquiry and British Royal Commissions in the 1940s. These led to the notion of the social responsible press in the US and UK. Similar grumblings in Australia led to a journalists’ code of ethics but media organisations themselves were loath to accept any accountability agencies. Although the unions pushed for a press council, the media proprietors continued support of the long-running Liberal government of the 1950s and 1960s ensured that nothing much got done about it. It wasn’t until 1975 when the Whitlam Government began preparing legislation to create a statutory press council, that the APC was founded grudgingly. The council had owner and union reps but the owners had the majority – and the funding. The Council has no legal authority apart from its own constitution.

News Ltd initially refused to join. In 1979 the APC upheld a complaint against Murdoch because his Adelaide Advertiser was so biased against Labor in the state election that year. But as Julianna Schultz says in Reviving the Fourth Estate, by the mid 1980s they were inside the tent and self-interest ensured the council had acquired the reputation of a defender of fourth estate values. Yet the nature of the APC meant it could never shake off its reputation as an industry lapdog. In 1991 Kerry Packer told parliament the APC was “window dressing”. The union called it the “publishers’ poodle”. And former Sydney Morning Herald editor David Bowman wondered how it could serve the public when it was dominated by the publishers.

Yet as McKinnon’s strong criticism hints and its statement of principles attest, the APC is a watchdog with potential bite. It has two broad principles worth noting. First, it notes, the freedom of the press to publish is the freedom, and right, of the people to be informed. It is an essential feature of a democratic society. Secondly, press freedom is important because of its obligations to the people not the media. Therefore public interest is foremost when dealing with complaints.

In his 1984 text The Media, Keith Windschuttle said there were two reforms that emerge from these principles. Firstly is the need to keep the press honest and maintain standards of accuracy and fairness (something he said the Press Council was set up to achieve). The second is the institutional reform of the media. The 1979 Norris Inquiry into Melbourne’s press (after Murdoch’s failed bid to win the Herald & Weekly Times) found two dangers with the existing media concentration: loss of diversity and too much power in the hands of too few. Norris recommended an independent authority scrutinise media share transactions to prevent further concentration. The Inquiry was a failure in that sense. No such authority was set up and Murdoch eventually got his hands on HWT empire. It was the refusal of the APC to deal with this matter that caused the journalists union (then the AJA) to quit its role on the council in 1987.

They returned 18 years later now rebadged as the MEAA and handed off all journalist complaints to the APC. As union boss Chris Warren said in 2004 “the press council can deliver something we can’t, which is a published correction”. Their return adds to the weight of the APC claim that it represents the entire print industry. But the more regulation-heavy broadcast industry never signed up. The APC is nominally independent and funded out of newspaper profits whereas in broadcasting there are mandatory licencing requirements dished out by ACMA.

But Windschuttle wrote The Media as his personal politics were changing from left to right. In the book he offers the alternative of the laissez faire response to regulation which the proprietors if given the choice would prefer. This is the notion that the press are simply in the business of telling the news and owe nothing to the people which it serves. The APC is pre-disposed towards the market system with its so-called “light touch” regulation. But as media scholar Robert McChesney notes in his book Communication Revolution, no one ever voted for a market-based press subsidised by advertising. Commercialism has gutted journalism in the last two decade. Newspapers remain the most important media for original investigation and reporting. However as Michael Schudson notes, Wall Street’s collective devotion to an informed citizenry is nil and as a result newspapers are going to the wall.

McChesney was talking about the American scene which has no strong public broadcaster as a counterweight but otherwise many of his lessons are transferable to Australia. In McKinnon’s final report, he casts the net far and wide with issues of concern to local media: Internet clean feed, secrecy laws, the right to publish school “league” tables, FOI, the Bill of Rights, privacy, protection of whistleblowers, court reporting, and many others. McKinnon reminds us of Article 19 of the Universal Declaration of Human Rights to which Australia is a signatory: “Everyone has the right of freedom of opinion and expression”.

McKinnon distils this into a “charter of a free press in Australia”. The people of this country, he says, have a right to freedom of information and access to differing views and opinions. This is a direct attack on News Ltd’s attempt to monopolise news in Australia and a worthy watchdog’s attempt to bite the hand that feeds it. With the even more combative Disney now in the chair, the social justice angle of the APC will only get stronger. At a critical juncture for the media, expect this battle to get a lot more heated.
Posted by Derek Barry at 1:47 am