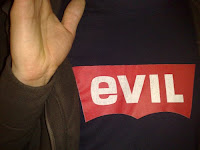 Google picked a bad week to launch a product called Wave. Low-lying Pacific Islands, many of whom are facing elimination as the sea level rises, are recovering from massive natural damage this week. A massive 8.0 magnitude earthquake struck just a few kilometres offshore of Samoa on Wednesday. Those that died stood little chance of surviving three metre waves that arrived onshore just a few minutes later. More than 150 people died in Samoa, at least 31 in American Samoa and nine more died in Tonga. (photo by snarglebarf).

Of course it is not Google’s fault any of this happened. Nor was it the fault of Saturday’s Sydney Morning Herald that they chose today to plug Samoa as a fancy-free tourist destination. Tourism is Samoa's largest industry, and one-quarter of the tourist accommodations had been destroyed. In fact the SMH may be helping the Samoan tourist board avoid a “second tsunami” as anecdotal reports arrive of mass cancellations. Google meanwhile is studiously avoiding the link between their name and the forces of nature. It prefers to issue sympathies to the lesser known but just as deadly Tropical Storm Ketsana (local name "Ondoy") which killed 300 people dead in Manila this week.

Their concern is admirable but Google’s Wave analogy needs a closer look. The name is based on surfing the web, but what if the Wave is too big? Will it wipe us out if we don’t catch it? Google is a massive company and we should no longer take their “don’t be evil” motto on face value. Its mission statement is to “organize the world's information and make it universally accessible and useful.” But Wave gives a lot of power to what is already a $22 billion company as it seeks information from every stream.

A few weeks ago Google launched Fast Flip showed a newspaper way of browsing Internet content. Google Wave also takes its purpose from older technologies. Wave asks the question what would email look like if it was invented today. It also combines elements from instant messaging, wikis and social networks with the ability to share documents, maps, images and video.

Google have launched their latest beta version of Wave by invite-only, initially limited to 100,000 people (note: this writer was not among the 100,000). While the artificial limit sounds gimmicky and goes against the way Google usually operates, it does have a point. Wave is intended as a fully open communication and collaboration platform but is not quite ready for prime time yet.

Google Wave has the potential to gather a staggering amount of data to bring to every conversation, so there needs to be a viable stress and volume test. There may also be performance issues. The initial 100,000 users are mostly tech savvy early adopters who will do much to challenge the scalability of the project. Google say this is just the beginning and will soon be inviting many more to try it out “if all goes well”.

The ramifications are enormous if it does work. Although email is now often seen as a somewhat dated technology, it works because of its ability to get a consistent message out to a mass audience quickly. Email is still the dominant business communication tool, a position it has held since the 1990s so there is big commercial incentive for Google to get it right. Google’s mail system still lags well behind Yahoo Mail and Hotmail though is increasing faster than either of its older rivals. Wave may also work wonders for personal usage of GMail.

Brisbane law professor and early adopter Peter Black gives Google Wave a tick of approval though he has reservations. Black missed out on a direct invite from Google but used his social network to get one. After 24 hours of testing, he says Wave is an “amazing tool”. Black likes the way it allows conversation to evolve (and re-play if necessary) and says it is intuitive. On the down side, it was difficult to get a true picture of its worth as Black had very people to collaborate with so far. He also says its level of difficulty may give it limited appeal and it could get “quite noisy” with emails, instant messages, SMSes, Twitter and Facebook updates all in the one space. Google will have to work hard to ensure the sound of its message doesn’t drown out the waving.
Posted by Derek Barry at 1:13 am

Thank you for this article. I am one of those early adopters of new technology. I believe that Google Wave is in its infancy stage and who knows if it will actually make it to full maturity. If it does that is great but they have a long way to go before the masses will ever be able to use it.