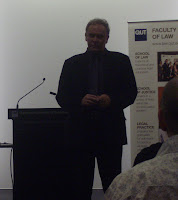 I went along to QUT Garden’s Point campus in Brisbane tonight to listen to Dean Wells argue the case against state governments. He was speaking at a free Public Lecture organised by QUT's Law Faculty called “Two’s Company, Three’s a Crowd: Why we could manage with two levels of government and how we could get there”. Wells is a Queensland state MP so is one of the few turkeys that might vote for this particular Christmas (pic: Dean Wells speaking at QUT).

Wells began by giving his audience a historical perspective. Initially there was only one form of government in Australia, the colonial government which is analogous to today’s state governments. The first local government was founded in Adelaide in 1840 with Sydney and Melbourne following two years later. Brisbane got its first council in 1859 just before the creation of the new colony of Queensland. These councils were deemed to be autonomous of state governments and were free to do whatever they wanted. But they remained a delegation of state governments who could (and did) abolish, segment or amalgamate them as they saw fit.

But the newly formed Commonwealth in 1901 had a different set of powers. Its powers were subtracted from the states but it was an irrevocable creation that the states could not go back on. Its powers were heavily subscribed and anything that was not on the list remained in the hands of the states. Though its powers were supposedly different from the states, there was a lot of duplication. Wells listed seven portfolios for the Queensland Dawson administration of 1899 (the world’s first Labor government) which had increased to 18 portfolios by 2009. Meanwhile at the federal the 1904 Watson administration had nine portfolios which had increased to 30 under Kevin Rudd in 2009.

Wells said there were three reasons for this federal expansion. The first was constitutional change which devolved powers from the states to the commonwealth. But given that most referendums failed, Wells said there was “precious little of that”. The second reason was modernisation and the creation of portfolios for areas that did not exist in 1901 such as social security and industrial relations. But the bulk of the increase, says Wells, is due to the third reason – duplication.

Wells says the Federal Government has two functions: what he calls “core functions” and the non-core operations subsidising the states often in competition to the state’s own functions. He defined the core functions as those of Prime Minister, Treasurer, Immigration, Defence, Trade, Foreign Affairs, Communications and the Attorney-General. He says the non-core functions included education, health, transport, environment, agriculture and resources. There was a major degree of overlap between state and federal departments in these non-core functions. The Federal Government, says Wells, has its fingers in every pie of every state.

Wells listed off the arguments why state and federal separation was a good thing. These included the likelihood that we were better off with a number of different approaches, we shouldn’t tamper with history, and we are running an entire continent. He even quoted Solomon in the Book of Proverbs: “in a multitude of counsel there is safety”.

But Wells dismissed all these approaches as “deluded federalism” and said we needed to rationalise duplication. He said that if we were starting from scratch we would have a system where federal governments would retain control of delivery of services to ensure all citizens have the same standard of living. We would only devolve to state governments all functions that would be better handled at a local level. In today’s world that list would include local economy items such as land registers, development and planning of housing, roads and rail (excluding Intercity), tourism, and local environment. Hospitals and education would remain a function of central government.

But Wells acknowledged that simply abolishing the states would be “dangerous”. There is nothing in the Constitution that would stop it but it would leave local governments as orphans reporting to “the dead hand of State Government”. The solution he said, might be found in Chapter 6 of the Constitution which allows for the creation of new states. Wells suggested that Queensland might break up into super-councils based on geographical location: South East, Central, FNQ, Western Qld and Southern Qld. This change could be done by legislation and would not require a referendum. The only danger, concluded Wells, is that these new entities would create their own councils maintaining the inefficiency of three layers of government.
Posted by Derek Barry at 11:57 pm