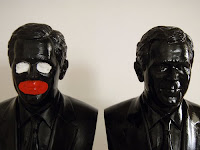 Channel Nine’s Hey Hey Its Saturday was juvenile unfunny entertainment when it appeared in the 1980s and 90s and doesn’t appear to have improved with age. But the Michael Jackson skit that appeared last night had less to do with racism than it was about disguise. It was offensive to Harry Connick Jnr, the program guest from New Orleans who was there to judge the act. But even Connick himself acknowledged the damage wasn’t intentional. He was worried less about the racism than how the skit would affect his reputation back home. He said he would not have gone on the show if he had known about the act. Connick told the audience that cheered the act that “We try to hard not to treat black people as buffoons". Though perhaps as some believe about Connick's own president, Americans don't try hard enough. (photo by Dequella manera)

The Australian buffoons were six doctors collectively known as “the Jackson Jive”. Channel Nine introduced them as a “tribute” to Michael Jackson. Five men in blackface presented themselves (see video at Crikey) as the black Jackson brothers and one front man was the “whitened” Michael Jackson of later years. The joke was that 20 years ago the same sextet performed on Hey Hey with a “black” Michael Jackson. Two decades ago, the six were medical students. Today they are all now pillars of the medical community. One is a radiologist, another a neurologist, a third is an anaesthetist, and there is a psychiatrist and a cardiologist.

Rather fittingly Anand Deva, the man who played “Michael Jackson”, is now a plastic surgeon. Also providing irony perhaps is Deva’s own ambiguous colour. Deva is Indian and he said the group of doctors were from multicultural backgrounds. He apologised and said the skit was not meant to cause offence. As Andrew Bolt says, it’s no defence against charges of racism to claim you’re Indian. But Bolt also says Deva had the right to lampoon the Jacksons who are a fair target but not a right to mock blacks generally.

Yet a blackface skit was never going to be the best way to do that in front of a Southern American guest. Channel Nine’s insensitivity in not realising this in advance was appalling but at least they scrambled a quick on-air apology. After an ad break, host Daryl Somers admitted blackface was an insult to Connick’s “countrymen”. Graciously accepting the apology, Connick worried how the Jive would be treated if they turned up looking like that in America. He didn’t have to wait long to find out. Through media such as Twitter and Youtube (which did not exist in Hey Hey’s heyday), the skit quickly moved beyond what Crikey called “slack-jawed suburbanites and pensioners” to travel around the English-speaking world.

That world was not impressed. Gawker said blackface in America is “one of those things that you can only show if you're talking about how awful it is because, well, it is pretty awful.” The Guardian wrote that the corollary of Somers’ apology to Connick’s countrymen was blackface in Australia was "perfectly acceptable".

Both Gawker and The Guardian were both overacting in their mad scramble to gain the high moral ground. The truth about blackface is far more complex than either publication would care to admit. Blackface is not perfectly acceptable in Australia and is very rarely shown on television. But it is also not a long time since the genre was incredibly popular in Australia as it was in the US and Britain. Historian Lyn Murfin says blackface is a difficult topic to write about in a politically correct age, when the concept of racism is fully developed and blacking up is widely considered abhorrent. It dates back to the 19th century when racism was a social phenomenon that did not know itself and as such had not been publicly named.

Blackface first emerged in antebellum America where it grew as a “dirty” rebellion against the anal retentiveness of capitalist Protestant culture. “Minstrelsy”, to give it its proper name, took off after the Civil War and its rise was surprisingly linked with baseball. The two occupations shared a language, a colourful culture and both announced the arrival of black men as powerful entertainers in the 1870s. Minstrelsy served a dual function. Firstly, it was a mask of blackness that represented the first cultural aesthetic that was uniquely American. Secondly, it framed American race relations by lampooning abolitionists and black citizenship. It took the black rights movements of the sixties to finally push blackface underground.

Blackface was an early arrival to Britain with the 1836 arrival of T. Daddy Rice and his Jump Jim Crow act. Despite continual cross-Atlantic traffic, minstrelsy in Britain developed along distinctive lines. The Kentucky Minstrels transcended the genre’s visual imagery with their British radio show. Meanwhile the Black and White Minstrel Show was hugely popular on BBC television from 1958 to 1978 and the stage show ran for another ten years beyond that.

Blackface also has a long history in Australia. On the tense night Ned Kelly was hanged, hundreds of people crammed into Melbourne’s Apollo Hall where they paid a shilling each to listen to Ned’s sister Kate and brother James. The hall was full despite the press downplaying the speakers as “relatives to that reckless scoundrel”. Apollo Hall was in a lively area of Bourke Street next to the Eastern Market and was primarily a blackface venue. The Georgia Minstrels sub-leased the hall to the Kelly siblings. According to Melissa Bellanta in her “Australian larrikins and the blackface minstrel dandy”, there is no suggestion that the minstrels performed on the night Kelly died. But Bellanta said the choice of venue was appropriate as the family was often described in terms of blackness.

Occasionally an African-American would perform at Apollo Hall but usually the troupe were white people who “blacked up” using burnt cork. Their minstrelsy’s combination of character songs, ballads and burlesques attracted huge crowds and appealed to a far more diverse audience than in the US or Britain. A standard feature of each show had leading characters delivering a stump speech in “nigger” dialect.

The meaning of nigger here is stylised African American speech as imagined by white Australians. But there weren’t many black Americans in colonial Australia. Their role at the bottom of the ladder was taken by the Irish and the Indigenous. Kelly’s family were poor white trash who missed out on the Australian gold boom of the 1850s and 60s. Ned and his brother Dan were “blackguards” and loved the attention of their two years of being outlaws. While they were on the run, a play called “Catching the Kellys” used white actors with black faces to portray the black trackers who failed in their attempts to hunt down the gang. At the end of the play, a plot twist revealed the blacks to be Irish.

The play showed blackface in Australia moved with ease between caricaturing Aboriginals, Southern American slaves and the Irish. As far back as the medieval period, blackness signified a range of despised qualities so blackface had a history that pre-dated the first American minstrel shows. Minstrelsy was initially the preserve of the lowest classes. In New York and London, as in Australia, minstrel-acts were to be found in the cheapest saloons. In England, they migrated to music halls by including popular songs in their repertoire. Writing about madness in nineteenth-century America, Benjamin Reiss said that popular black minstrelsy was a proletarian provocation but which was often sanitised by white supremacists to fit their notion that blacks were backward. It is no wonder blackface became frowned upon in the more race-conscious 1980s and 1990s.

But the proletarian provocation reminds us that blackface is as much about disguise as it is about racism. Historian David Roediger says the purpose of the minstrel mask is as much to maintain control over a subversive act as much as to ridicule. Is the Hey Hey offence a class related issue? Are those who don’t like it also upset by Orson Welles blacked up to play Othello? Well may we wonder why it matters that a white American took offence at an Indian dressing up as an Afro-American on a vacuous Caucasian-produced television program. Meanwhile few people pay attention to the need to solve genuine issues like life expectancy in Australia’s most racially deprived community.
Posted by Derek Barry at 2:52 am

A video of US singer Harry Connick jnr impersonating a southern US preacher has resurfaced online in response to the singer's condemnation of a controversial "blackface" skit on a Hey Hey It's Saturday reunion last night.

In the 13-year-old video, filmed for MADtv in 1996, Connick jnr wears a black wig, preacher's robes and speaks with a southern accent, before promoting one of his albums.

Look up a film called "The Silver Streak" with Richard Prior and Gene Wilder. There's a scene where Richard Pryors character disguises Wilders Character as a black man in order to evade the cops and get back on the train in order to rescue a woman in danger. Very funny stuff.

That is a great film - but it was a Seventies film - that's the free-love spouse-swapping open-marriage decade when more people than Polanski had under-age escorts, and everybody had a deviated septum.
The past is another country, especially when it's the Seventies.
I did not think the skit was racially offensive, but the show was culturally offensive for sure.