Margaret Simons on the future of journalism at Brisbane Wordpool 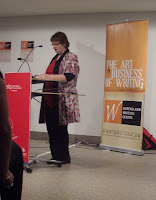 Media writer Margaret Simons was the star attraction for the final Wordpool event of 2009 at Brisbane's State Library of Queensland (thanks to Mark Bahnisch for the hat tip on the event). Simons is the author of the seminal text on Australian media The Content Makers (2007) and runs a blog of the same name under the Crikey banner. The Melbourne-based Simons reminded her audience of her close affinity with Brisbane having been here often since The Age assigned her to cover the Fitzgerald Inquiry twenty years ago. (photo of Margaret Simons at SLQ by Derek Barry)

Simons began with a history lesson and charted the influence of the Gutenberg printing press. This revolutionary device effectively created democracy and modern capitalism. The movable type press was invented in the 15th century but it took another two hundred years before newspapers emerged and almost another hundred before the first journalists arrived. The printing press altered power relations and caused the decline of oral memory. It enabled people to identify themselves belonging to nations rather than small communities. It caused the Reformation and the rise of Protestantism. It sowed the seeds for the American and French Revolutions. These trends were exacerbated by broadcasting in the 20th century.

Simons says the Internet now has the same revolutionary capability as the printing press. But its disruptive effect won’t be noticed overnight. Simons recalled what journalism was like when she started in the business 27 years ago, in an era without computers or mobile phones. The newspaper buildings had a manufacturing air with the smell of hot metal and ink and the rumbling of the presses. She recalled that people would queue out outside the building at midnight to get the first edition. Ruefully, she said, they were not there for the journalism; they had come to get first nibs at the classified ads.

But the classified ads model that sustained newspapers doesn’t work on the Internet. Free services such as Craigslist have destroyed the business model and ads don’t pay for journalists’ salary any more. Simons also noted that journalists’ power has declined in the Internet Age. Their influence has waned with the power of the masthead and the Page One headline does not matter as much as it did 20 years ago. Similarly the power of television has waned. Families no longer sit together to watch the 6pm news. 68 percent of Australian households have more than one television and a quarter of all households are single occupancy. This fragmentation undermines the business model that relies on gathering mass audiences to sell to advertisers. The business model is broken. And when high-speed broadband arrives, the last power of the broadcasters will have been broken with it.

Simons then moved on to discuss ABC boss Mark Scott’s recent “end of empire” speech. She was cautious about whether this was a good or bad thing noting the Life of Brian skit about “what have the Romans ever done for us?” Similarly old media such as News Corp have facilitated democracy, employed large numbers of people, acted as watchdogs and informed the public. She also noted the end of the Roman Empire brought in the Dark Ages and would not rule out the possibility that similar dark times lay ahead for journalists. The big change in the Internet era, said Simons was universal instant access to both information and publishing. With the aid of mobile phones, people could (and did) Twitter this speech immediately - she helpfully suggested the use of the #wordpool hashtag. Simons said that Twitter was now a crucial tool for deciding what to read or watch. The question was then, if everyone is now a publisher, what do journalists do that is “special”?

Simons said that journalists had to specialise in things they are interested in. The barriers to publication are low and it is possible to attract international audiences and advertisers who might be willing to pay to access such a niche. She noted the long tail model as perfected by Amazon who make most of their money from niche audiences. She said Crikey was a good example of niche media with its email list of 10,000 people. Its audience is small but influential and Simons could delve into more detail about the media there than in a mass publication because the audience is interested in that detail.

Simons also said that journalists must engage with social networks. They needed to show reliability, genuineness and a willingness to interact. Tools such as Twitter, Facebook and Google may come and go but the functionality they represent will stay. She said Twitter was moving fast and her advice was “get on board now”. She noted that the appetite for news has not waned though people may be looking in different places for it. Australia is a chronically underreported country and opportunities exist in reporting local councils and courts. What journalists need to do is to link these to federal and local government policy and make the connections. The bottom line was that if people want reliable information then "professional messengers need to be supported”.
Posted by Derek Barry at 1:24 am