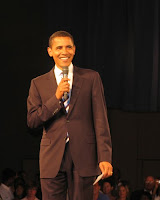 Either there hasn’t been much peace in the world this year or the 2009 Nobel Peace Prize committee is stacked with American Republicans. Because those scenarios would appear to be the only ones that make sense of Obama’s award. The president seemed almost embarrassed about it today and is unlikely to want to thank the Oslo committee for the honour. Domestically, many will see it as proof Obama is an unreconstructed European socialist. And coming so early in his presidency, it is only likely to undo the massive goodwill towards him in most parts of the globe. (photo by jlowe4obama)

It is an odd award in many respects, not least because of the timing. The decision-making for this year’s prize began in September 2008 when the committee invited nominations for the 2009 award. At the time Obama was on the hustings so was unlikely to have been in the frame at this stage. The nominations deadline closed in February so we must assume he had been nominated barely a few weeks after assuming the presidency.

This means the decision of the Oslo Nobel committee to award him the 2009 Peace Prize can only be for his intentions rather than his actions. According to the official communiqué, Obama won the award “for his extraordinary efforts to strengthen international diplomacy and cooperation between peoples”. The committee said President Obama has created a new climate of multilateral diplomacy in international politics with emphasis on the role of the UN and other international institutions. But the most obvious translation is he won it for not being George W. Bush.

Because he could not have won for his mixed foreign policy record. He ordered the closure of Guantanamo Bay prison (though that is proving more difficult than he thought) and prohibited the use of torture (again proving difficult to implement in practice). He is proceeding with a plan to exit Iraq but is increasing US involvement in Afghanistan and Pakistan. He has announced a strategy to address the international nuclear threat (but hasn’t reduced the US’s nuclear arsenal), and has established a new dialogue with China. Much of this is laudable, but hardly prize-winning.

Five Thirty-Eight has come up with a laundry list of other justifications even while admitting they are “a bit tenuous”. It praised his speech at the UN and said he has long been an advocate of non-proliferation. He has also taken a tough stance on climate change while also taking a softly-softly approach on Iran. It also praised the diplomacy of the re-elevation of the US Ambassador to the UN to a cabinet level post.

Obama has a lot of goodwill to work with - Crooked Timber calls him “global prozac”. He is a wonderful orator and may yet turn out to be the greatest US president in fifty years but he has a long way to go yet. Taking the lead at Copenhagen in December would be a good start. But he still has his training wheels on for now. Obama should follow the advice of both the right (former Bush UN ambassador John Bolton) and the left (Michael Tomasky in The Guardian) and decline the Prize.
Posted by Derek Barry at 2:32 am