Australia’s federal parliament should move from Canberra to Sydney 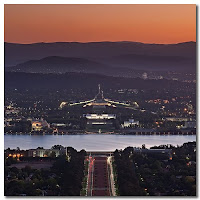 [photo by Sam Ilic] I'm no great fan of the national capital even though I like its architecture. I’ve only been to Canberra a couple of times and the closest I’ve come to staying there was a night across the NSW border in Queanbeyan. I found the capital an elegant but cold and deadly dull place far removed from the mainstream of Australian life. Walter Burley-Griffin’s creation is a work of architectural brilliance but no soul. And in a country with such a dominant coastal culture, Canberra is an inland fish out of water. The site of the nation’s capital arose as a Federation issue and Canberra was the compromise between the then equal cities of Sydney and Melbourne. But in the last 50 years Sydney has outranked its Victorian rival by most major metrics of importance and is Australia’s only truly global city. If we were making the choice of capital today, Sydney would be the obvious choice (and we could get rid of the useless states while we were at it).

The only reason it won’t happen is the outcry of Canberrans whose city would suddenly be stripped of importance and relevance. Yesterday Peter Martin blogged about the old Keating and Fraser arguments about Canberra as the Australian national capital. Martin linked to a Laurie Oakes article in which Paul Keating left him in no doubt the capital should be Sydney. Fellow former Prime Minister but notably Melbournian Malcolm Fraser can’t quite bring himself to agree the winner is Sydney. However he did tell the veteran Nine newsman the new parliament house was his worst mistake as Prime Minister.

Oakes agreed with Fraser’s view of architecture but thought Keating was merely “possum-stirring”. According to the Australian Dictionary of Colloquialisms, possum-stirring means to liven things up, create a disturbance; raise issues that others wish left dormant. Oakes was right. These were definitely traits Keating had and there are plenty of plenty who wish the Canberra capital argument remain dormant.

Perhaps not surprisingly most of these people have a strong Canberra connection, including Laurie Oakes himself. Oakes, Nine’s federal political reporter, is not happy about the alternative. He said the main reason Sydney should not be the capital was because access to corruption and lobby groups. “Our federal politicians and senior bureaucrats would all then live among, mix with and be constantly influenced by the same log-rollers, urgers, developers, greedy business people, lobbyists, shysters, corrupters and crims who have made NSW politics such a cesspit,” said Oakes. True, perhaps, but hardly relevant. A mere 300kms of distance is hardly going to stop someone from trying to corrupt a federal politician.

Peter Martin (The Age’s Canberra correspondent) is also in the negative camp and said Keating and Fraser were wrong to call Canberra a mistake. He agrees with another of the capital’s journalists, former Canberra Times editor Jack Waterford who said recently “opposition to shifting the Australian capital to Sydney or Melbourne would be even more fierce today than it was 110 years ago.” But would it? It seems to me that no one really cares outside vested interests in Canberra such as Oakes, Martin and Waterford.

It is not just Paul Keating that thinks Sydney would make a good capital. He made the remark in a 2007 speech when John Howard was still in government. Keating noted that Howard had effectively moved the capital to Sydney anyway and “Canberra had an air of unreality.” His comments were supported by then NSW Premier Morris Iemma and Patricia Forsythe of the Sydney Chamber of Commerce who said Sydney was already nation's economic, cultural capital and transport hub. "When world leaders come to Australia they come to Sydney,” Forsythe said, “and if they have time they will go to Canberra."

Ever keen to distinguish himself from the man he followed, Labor PM Kevin Rudd did find time to go to Canberra. His home town Brisbane is too much of an outlying city to host cabinet meetings on a regular basis but it is not hard to imagine the next Sydney Prime Minister - whoever he or she might be, and which ever party he or she represents – going back to the Howard precedent and moving the capital back to the nation’s largest city. And Canberra need no longer be a waste of a good sheep paddock.

Australia is not alone in the misguided notion of quarantining the capital from the largest city. There are 35 such capitals worldwide at the time of writing according to Wikipedia and the list is growing. Abuja (Nigeria) and Astana (Kazakhstan) both became capitals in the 1990s. In 2006 Burma shifted its capital from Rangoon (Yangon) to the remote hillside town of Naypidaw so that its paranoid military rulers would feel more secure. Washington DC and Ottawa are closely related. But the capital Canberra has most in common with is Brasilia which arose from post-war presidential designs to inherit the Brazilian capital from Rio in 1960.

Brasilia turns 50 next April and its 101 year old architect Oscar Niemeyer hopes to be alive to see the anniversary. It is the only 20th century capital that UNESCO has given a heritage listing to and viewed from above, the city has elements that repeat in every building which gives it a formal unity. But not everyone was happy. Brasília was a city built for the car, not the pedestrian. And Simone de Beauvoir complained that the similarity of Brasilia’s partment blocks gave the city "the same air of elegant monotony.”

A similar cool air infects Canberra. Even Canberra supporter Frank Moorhouse says he likes the city and its culture because it has a “Scandinavian aesthetic rather than a Mumbai aesthetic”. But this, like the massive freeways of Brasilia, is a 20th century aesthetic. The museums can stay in Canberra but on environmental grounds alone we should be discussing when the parliament should move closer to the people it serves.
Posted by Derek Barry at 2:02 am

I couldn't agree more. I think the comment about Australia being an overwhelmingly coastal society is very apt, too - it's frustrated me for a long time that we cling to stereotypes set in the bush or the desert, when 80% or more of the population live in the great coastal cities. I remember rusted-on Laborites complaining in 1996 about Howard residing in Kirribilli House instead of The Lodge, but no matter what you think of Howard's politics, the move made perfect sense if you weren't caught up in political jealousy.

There's actually far more than 35 capitals worldwide that Canberra is similar to, if we take provincial and state capitals into account - I mean state capitals of US states, most of which are in small, obscure cities that many people have never heard of. I've always had the vague impression that this is because of anti-city bigotry in the early USA; cities were full of immigrants, manual workers and Je- sorry, I mean bankers.

The only possible realistic argument I can see against moving the national capital to Sydney is the extra pressure that would put on roads, public transport etc. The other arguments seem to be mostly based on jealousy. The simple fact is that foreigners think Sydney IS Australia's capital - they think of the Harbour Bridge and the Opera House, not Canberra's Parliament House, which they probably couldn't even recognise.

Unfortunately, a move to Sydney will probably never happen without some major national upheaval that makes people focus on far bigger things and gives them neither the time nor the wish to lobby against such a sensible move.

The museums can stay in Canberra but on environmental grounds alone we should be discussing when the parliament should move closer to the people it serves.

Given that Canberra already exists and that the "museums can stay" the "environmental grounds" don't seem all that compelling. Most parliamentarians would still be travelling from somewhere that isn't Sydney, no? Similarly, only 1/5 of the citizenry would be substantially closer to (ie. in) the nation's capital. Those flying from electorates clustered around every other state capital except Brisbane would have slightly longer flights.

The simple fact is that foreigners think Sydney IS Australia's capital