Baghdad bombing is a reminder that Iraq is a fiction 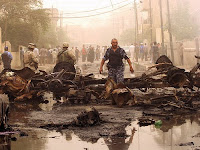 Yesterday’s explosion in Baghdad was a reminder that Iraq’s problems have not gone away. Opponents of the state launched two massive suicide bombs outside Justice Ministry and the council buildings with vehicles loaded with 68 kgs of explosives. It was the deadliest attack in two years and occurred two months ahead of planned elections. At least 147 people were killed and another 500 injured in a soft and indiscriminate attack on the centre of the capital just outside the heavily secured Green Zone. (photo of a 2005 Baghdad bombing by controlarms)

No one has claimed responsibility but there are plenty of enemies to al-Maliki’s Shi’ite regime with reasons to carry out the atrocity. Al-Qaeda, the Sunni Sons of Iraq, ex-Ba'athists, Kurds, Shi’ite extremists all had motives to discredit a government looking for credit for Iraq’s increasing independence. The still-large American military presence also rankles with many Iraqis. The government was due to meet yesterday to discuss laws to govern January’s proposed general election. The meeting did not happen and the blast has put further doubt on whether the poll will take place.

The street where the blasts occurred had just been reopened to vehicle traffic six months ago as the regime attempts show Iraq is getting back to normal. But this new “normal” is very different than what passed for run-of-the-mill in Baghdad prior to 2003. The US has turned the old order upside down. Democracy has given the more numerous Shi’ites power and the old Sunni Ba’athist elite are disgruntled. They boycotted the 2005 election and may do again in 2010. There are also issues on the Kirkuk faultline of Arab-Kurdish relations. The International Crisis Group has nominated Ninewa as the new flashpoint with violent sectarian attacks common-place in a town which is mainly Arab but with a large Kurdish minority.

Finding a sustainable solution to Kurdish disputed borders is one the fundamental problems threatening Iraq. The country was founded as an artificial construct after Britain cobbled together three Ottoman provinces to give to a deposed Saudi king after World War One. Strong Sunni leaders papered over the cracks for 70 years but its future is less certain. ICG’s Middle East Program Director Robert Malley says a compromise won’t happen without an assertive American role. “The US might be on its way out, but its hands will be full even as it heads for the exit,” he said.

As Vice President Biden reiterated in September, the US “recognises and supports” a united Iraq. But from a US policy perspective, Afghanistan is the now only overseas war-game in town and are anxious to withdraw large-scale forces from Iraq. There are still more US troops in Iraq than there are in Afghanistan and General McChrystal wants them badly. For the first time since the Iraqi war started, US Coalition forces deaths are going to be higher in Afghanistan than in Iraq this year with three times as many casualties to October. The Afghan numbers are not yet as high as figures for the early years of the Iraq war but have been on the increase since 2003 so it is safe to assume things will get worse there.

The Afghan presidential run-off election will dominate headlines but the Iraqi poll has the potential to be even more traumatic. As The Guardian puts it, politics of compromise and national unity in Iraq are fragile and slow-moving. The political system has been simply been unable to overcome traditional challenges leading to an inevitable consequence of violence. Iraq’s same old “issues of oil, federalism, provincial borders and reconciliation [are] still festering”, says The Guardian. Expect more bombs in Baghdad and elsewhere until these challenges are addressed.
Posted by Derek Barry at 12:58 am

I haven't had the time to drop by, for ages.

I know where you come from, and trust your writing. Not your ‘opinion’. Yours are the facts man, the *informed* facts, as best as we get these days.

You allow me the pure luxury (these days) of making up my mind on situations to which I have no personal knowledge, but to which I am confident that you have applied ‘traditional’ (ancient, but oh so needed) journalistic skills, which allow me the luxury of making up my own mind based on concrete observed or transcribed facts, not ‘opinions’.

Thank you, young man. May you become the norm: again: one day!

Yep, agree with Passing By

Indeed me thinks that most of the stuff is common knowledge for those who follow the news these days.

What I would like to know is how was Iraq prior to the US led invasion? Hope you can come out with a good write on that mate.

Did Saddam the "bad boy" (some thought with nuclear weapons) eliminate as much as the body counts we see almostly daily now, or was he removed and a whole host of Saddam wannabe's have come to the fore.

Most likely the case if you ask me.