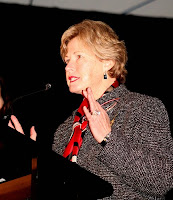 Senator Christine Milne has said Australia needs the Greens’ new safe climate bill because of the Federal Government’s “failure to address climate change in a way the science demands.” Senator Milne launched the bill this week saying it was an “environmentally effective and economically sound” response to the Rudd Government’s emission trading scheme. “Our goal is not just to reduce emissions but to pass on to our children and our children’s children the safe climate that has nurtured us and made human civilisation possible,” she said. (photo of Christine Milne by mooks262)

The key targets of the bill are to reduce emissions to at least 25 to 40 percent of 1990 levels by 2020 and to reduce carbon concentrations to 350ppm (parts per million) “as quickly as possible”. The Greens’ plan also abolishes the $10 price cap on permits and places a limit of 20 per cent of permits bought from overseas.

Other recommendations include a mechanism for tallying voluntary action and an industry compensation mechanism as proposed by the Garnaut Review which compensates trade-exposed industries for the difference between their competitiveness under the scheme and what they do now. Senator Milne says the critical question is how much any climate action will reduce carbon emissions. She said Labor’s Carbon Pollution Reduction Scheme (CPRS) was “fundamentally flawed” and its goal of halving global emission by 2050 would not keep carbon concentrations in the atmosphere to below 450 ppm.

Labor’s current target is 5 per cent unilaterally which could rise to 25 per cent if there is agreement at December’s International Climate Change Conference in Copenhagen. Ben Eltham from the Centre for Policy Development said Labor’s policy is based on outdated science that 450 ppm was a safe upper limit for carbon pollution. “CO2 concentrations are currently at 387 parts per million and climbing,” he said. Eltham said that was already above what most scientists consider to be safe. “We need to become carbon neutral as quickly as possible,” he said.

Crikey’s political commentator Bernard Keane said the Greens’ bill was “sensible and mean the Greens are currently the most economically-rational party on emissions trading.”

But Family First senator Steve Fielding said the Greens plan would “send Australia back to the Stone Age”. “If we do what the Greens propose, Australia would no longer exist because there’d be no industries left to drive our economy,” he said. Senator Fielding’s opposition means the Senate is unlikely to pass the Greens’ bill even with Government support.

Labor plans to put its own CPRS to a vote before the end of the year. Federal Minister for Climate Change Penny Wong told ABC Radio National Breakfast program she has had a number of meetings with Senator Milne and Senator Bob Brown to discuss the Greens’ proposals. “We think our targets are responsible and ambitious and we do not agree with the Greens' proposition that Australia should cut its emissions by 25 per cent unilaterally,” she said. But Senator Wong also admitted the Greens had done “a significant amount of work” and the Government would be prepared to negotiate further with them.

The Greens say their amendments are consistent with the recommendations of Professor Ross Garnaut’s review last year. Professor Garnaut told ABC’s 7.30 Report on Monday the horsetrading over the ETS was “one of the worst examples of policy making we have seen on major issues in Australia.” He recommended parliament pass the Labor legislation as a base for implementing “earlier rather than later.”
Posted by Derek Barry at 11:50 pm