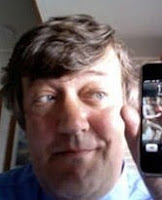 The Prince of Twitter dropped a bombshell to his near million followers tonight with his attempted Twitter quitter note. “Think I may have to give up on Twitter. Too much aggression and unkindness around. Pity. Well, it's been fun” he wrote. Looking back a tweet earlier and there was a more definitive statement. “@brumplum You've convinced me. I'm obviously not good enough. I retire from Twitter henceforward. Bye everyone.” @Brumplum was Richard of Birmingham, England. Richard’s blog “Plum’s plums” comes with an adult warning from Google but is otherwise unremarkable. Stephen Fry is not mentioned anywhere except in the Twitter stream. (photo adapted from the original by wilsondan)

It would seem that Richard and Fry are unknown to each other. But Brumplum mentioned in passing to another Tweeter today he thought @stephenfry’s tweets were ‘a bit... boring.... (sorry Stephen)”. For some reason this mild rebuke got under Fry’s skin as it caused him to reply to brumplum “whereas yours are so fascinating I can barely contain my fluids.” Two hours later, Fry made his announcement he was quitting.

Pity poor Brumplum. Within minutes of Fry’s announcement, people were flocking to his page for more information. Once Brumplum was outed as the Fry twitter killer, the Twitterverse was intent on proving Fry right about the aggression and unkindness. “Always nice to forever be known as the idiot who fucked over Fry”, said one person to Brumplum. “Look what you've done, meaningless piece of meat!” said another. “i feel i should say something horrible to you for you're stephen shunning” said a third. And on it went.

But the reality is that if Stephen Fry is going to quit Twitter it won’t be because of the boredom he caused Richard Nobody of Birmingham. Fry is a massive presence on the social network. He is on more lists (5,520) than most people have followers. He has 924,300 followers of his own. According to the Telegraph, Twitter has given him extraordinary power. He has used the platform as a bullypulpit on issues from Japanese shark fin fishing, to Westminster press freedoms, to getting a Londoner off death row in China. “On September 16, he demanded that Gordon Brown attend the Climate Change conference in Copenhagen;” said the Telegraph. “On September 21, Mr Brown announced that he would.”

Fry was also instrumental in the Twitter campaign to castigate Jan Moir for her homophobic column about Stephen Gately. In short he is at the centre of most Twitter storms. He deeply understands the tool’s potential to be a mouthpiece of the masses. But to his vast army of followers he is merely a funny and honest person who shares his life on a public social network. And so for all the people who tweeted for brumplum’s head, many times more simply wanted to show Fry their support and pleaded with him to continue tweeting.

Fry gave a sense of how the pressure to perform in the platform may be playing out with a brilliant essay on his own blog a couple of weeks ago. In “Poles, politeness and politics in the age of Twitter” he reflected with scorching honesty on his practice of “tweet first, ask questions later” in the light of the Moir affair. He also noted how an appearance on Polish television went badly wrong when he said something like “let’s not forget which side of the border Auschwitz was on.” It was an insensitive remark which he immediately regretted but the hatemail he got extinguished “any spark of apology”. This only made matters worse and he unreservedly apologised in the blog post.

Fry was finding out the hard way that he was now considered a politician and was being treated the way anyone with real power is treated. He was aware of his own influence in the Moir and Trafigura cases and noted “a shift in the very focus of democracy.” The “Twinternet” was becoming a Fifth Estate he noted (a label previously used to describe blogs) rescuing the media in its battles with the legislative, executive and judicial branches of government. “A pleasant twittery microblogging service that I joined in the spirit of curiosity and fun has emerged as a real force in the land and it is of course fascinating and pleasing to see this,” he admitted.

Fry then attempted to undersell his role. He does NOT wield influence, he contended. He was late on the scene with Moir and Trafigura. There was occasionally better things to do than Twitter. “Contrary to appearances I have another life and do not spend all my time monitoring screens and detecting every twitch on the filament of the web,” he said. Twitter’s name is a clue to its meaning, he said. It is not called “Ponder or Debate”. Yet he also conceded it was a new and potent force in democracy and “a thorn in side of the established order of things”.

And Fry was getting fed up with the centrality of his role in the revolution. “Hundreds of requests pour in every day asking me to use my strange, new-found ability to connect to a lot of people,” he said “It is as if I own a billboard on the busiest road in Britain.” Fry was beginning to sense a paradox at heart of his power. The closer he gets to the centre, the more people pay attention to what he has to say. “Maybe the very fact that I have so many followers now disqualifies me from stating the sort of opinions all others are free to – as if I were a member of the royal family.” Perhaps accepting his now figurehead status, he concluded, “the best I can do is hope for a quiet week ahead.” If he does remain quiet in Twitter, it will be his decision.
Posted by Derek Barry at 1:43 am

Proofreader here:
" He on more lists (5,520) than most people have followers"
2.
Fry's tweets are not boring. I exist on twitter MERELY to scan his and Russell Brands, and have no interest in tweeting myself.
When a person is an icon, they can get away with anything (Joanna Fabulous?) and because we KNOW Fry's history, we empathise and support.
His Jewish family was Auschwitzed and that gives him my permission to say anything he wants about Austrians, Germans, NAZIs and the whole damn thing.
anything he wants.

If we knew BrummyPlum's story we might also understand, but if he goes to the library with his revolver, I won't care.
There IS too much nastiness on the net.

My point is this has nothing to do with brumplum other than tweeting the wrong comment at the wrong time.

I think what we need to remember is that people like Stephen are still people, and they screw up, have feelings, suffer low self esteem, depression and shit days.

And it is well known that Stephen is bipolar, which means he has another bear to wrestle every day.

Yes, I feel it was an over-reaction to something that was a thoughtless throwaway line, and the vitriol that went towards the person who made that thoughtless tweet was bloody embarrassing and childish.

But I think we need to stop seeing Mr Fry as some kind of superhuman, he's just a man like any other and things get under his skin like the rest of us, and sometimes one is known to over-react.

I admire him for being man enough to own up and apologise when he feels he should.

“whereas yours are so fascinating I can barely contain my fluids.”

Well, I just pissed myself reading that! Hilarious.