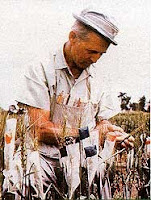 The father of the green revolution, Norman Borlaug, has died in Texas. He died at his home in Dallas on Saturday due to cancer complications. He was 95. Borlaug was an agricultural scientist who won a Nobel Peace Prize for his role in combating world hunger and saving hundreds of millions of lives. Thanks to the green revolution, world food production more than doubled between 1960 and 1990 and his work was feted in a 2006 book entitled The Man Who Fed the World.

Borlaug was no great fan of the phrase Green Revolution which he described as a “miserable term” but his high-yielding crops saved many parts of the world from famine in the 1960s. Kenneth Quinn, President of the World Food Prize, said the world had lost a great hero. “Dr. Borlaug’s tireless commitment to ending hunger had an enormous impact on the course of history,” he said. “He will be remembered with love and appreciation around the globe.”

Norman Ernest Borlaug was born in Saude, Iowa in 1914 to parents of Norwegian stock. Borlaug left the family farm to study at the University of Minnesota where he obtained a Bachelor of Science degree in 1937 and gained some fame as a champion wrestler. Borlaug continued studying and got a PhD in plant pathology and genetics in 1942. During the war, Borlaug worked at a military lab where he helped develop a glue that stopped food containers rotting in saltwater.

In 1944 he went to Mexico to work for an agricultural development program run by the Mexican government with support from Washington and the Rockefeller Foundation. He would spend the next 40 years of his life on this project. Borlaug looked at the problem of cultivating wheat which was susceptible to the parasitic fungus known as rust. He experimented with double wheat seasons and dwarf plants which were disease resistant and gave higher yield. By 1963 nearly all of Mexico’s wheat came from Borlaug varieties. The harvest had grown sixfold in two decades and Mexico was now a net exporter of wheat.

Borlaug’s success attracted interest in the sub-continent. At the time India and Pakistan were at war with each other and both were close to widescale famine. India was importing huge quantities of food grains from the US. In 1965 Mexico exported a large quantity of wheat to both countries with almost immediate effect. Pakistan’s wheat yield doubled in five years and India became self-sufficient in ten. He then took those varieties, and improved strains of rice and corn, to Asia, the Middle East, South America and Africa.

For his work, his ancestral nation of Norway awarded him the Nobel Peace Prize in 1970. Accepting the honour, he said the destiny of world civilization depended upon providing a decent standard of living for all. He said "green revolution” was too broad in scope and only wheat, rice, and maize yields had increased. He compared the forgetfulness of the West and its abundance with the underprivileged billions in the Third World for whom “hunger has been a constant companion, and starvation has all too often lurked in the nearby shadows.”

With his reputation safely established, Borlaug continued to press for improvements across the developing world, especially Africa. He helped found the Sasakawa Africa Association in the early 1980s to improve African food production. With the help of local researchers he concluded that the existing products and information could greatly expand the African food production, but the improved technologies were not reaching the smallholders who produced most of Africa's food, and the extension systems were failing to link research to farmers.

But while his work was greatly respected in Africa and Asia, he remained almost unknown in his homeland. Writing in 1997 in The Atlantic Online, Gregg Easterbrook said that the US had three living Peace Prize winners of which two were household names (Elie Wiesel and Henry Kissinger) and the other was Borlaug. Easterbrook suggested that one reason for Borlaug’s anonymity was the fact that his life and work were done in developing nations far from the media spotlight. But he added a second more sinister reason: “More food sustains human population growth, which [critics] see as antithetical to the natural world.” Most of the criticism of Borlaug’s work has been around environmental concerns not humanitarian. These relate to large-scale factory farming which is biased towards agribusinesses as well as issues with inorganic fertilisers and controlled irrigation causing environmental stress. Borlaug never resiled from these arguments and said high-yield farming actually helps preserve natural habitats.

Borlaug remained active in his older years. In 2006 he was awarded America’s highest civilian honour, the Congressional Gold Medal. His long-time colleague and friend Professor M.S. Swaminathan called him one of the greatest Americans and humanists of all times. In his acceptance speech, Borlaug stressed the importance of continuing the fight against hunger. "We need better and more technology, for hunger and poverty and misery are very fertile soils into which to plant all kinds of 'isms,' including terrorism," he said.
Posted by Derek Barry at 12:30 am

Down here in Bengal Norman Borlaugh is fondly remembered as "the man who fed us".... His contributions towards eradication of hunger in these regions during the great famine and the influx of Bangladeshi refugees in 1971 were immense and awe-inspiring....
And I thank you for giving me this opportunity to salute this saintly man...indeed a true benefactor of mankind....