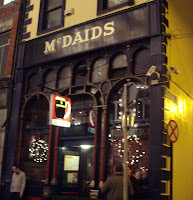 Guinness celebrated its 250th anniversary with a party in four countries on the weekend. Festivities were at their peak in the beer’s spiritual home Dublin on Thursday, but the anniversary was also celebrated with concerts in Lagos, Kuala Lumpur, and New York. On 24 September 1759, Arthur Guinness signed a 9,000 year lease on the St James's Gate brewery in Dublin and began a beer brand that is the best known in the world. The anniversary party kicked off at 5.59 pm (17:59) in Dublin with a toast to Arthur Guinness, before carrying on long into the night in the other cities (photo of McDaids of Dublin by Derek Barry).

One of the reasons for Guinness’s worldwide success is the quality and quantity of its advertising. Britain’s World War One government can take some of the credit. It passed legislation to reduce the alcoholic strength of beers to promote the war effort. Guinness was hurt more than most by this as it needed the strength to preserve the quality of its extra stout. Guinness consumption decreased so badly by the mid 1920s, the company hired SH Benson advertising agency to turn it around. Benson toured Dublin pubs where most people said they drank it because “Guinness is Good for You”. They also asked thousands of British doctors who confirmed that the beer was a panacea for any ailment under the sun.

While the success of the subsequent campaign was legendary, Guinness’s health claims continued to be argued throughout the years. The company is now careful to make any medical claims for its drinks. It has not been able to use the “Guinness is Good for You” slogan since the 1960s and it has not appeared on a poster since 1937. However 2003 research from the University of Wisconsin found that a pint of Guinness at mealtimes is good for the heart, unlike a pint of lager. It found that Guinness was full of flavonoids (also found in dark fruits and berries as well as red wine and chocolate) which reduce damage to the lining of arteries.

But Guinness is more than about health. In 2004, a British survey named the Guinness can widget as the greatest technological invention of the last 40 years. It was invented in the 1980s by a Guinness brewer named Peter Hildebrand who created a jet of foam instead of a jet of air inside a can. The plastic molded device that sits on the top of each can with a small amount of beer and nitrogen, trapped in the widget. When the can is opened, the nitrogen is forced out through the beer, which creates the creamy head. The resulting Draught Guinness in Cans saw the brand take off again in Britain and had the side effect of increasing pub sales too.

Guinness is now brewed in almost 50 countries, with ten million glasses drunk around the world every day. It is made from four natural ingredients: barley, water, hops and yeast. Its dark colour and distinctive taste come from the roast barley. The Guinness family have not been directly involved in the management of the company since 1992 although they retain a financial interest in the business. In 1998 Guinness merged with Grand Metropolitan to form Diageo, now the largest drinks company in the world. Among the brands owned by Diageo are Smirnoff, Baileys, Johnny Walker, J&B, Gordon’s, Captain Morgan, Bushmills and Bundaberg Rum.

The background of Arthur Guinness is shrouded in mystery. Although a Protestant, he appropriated the coat of arms from an aristocratic Catholic family named Magennis. Through this sleight of hand, it allowed his family to inherit the title of Earl of Iveagh which gave later family members great prestige. Guinness began in 1759 by brewing several beers and ales at St James Gate in Dublin. On a visit to London he saw porters enjoying a new drink which was a mixture of beer and ale and named after their occupation. When porter was introduced to Ireland, Guinness decided to beat the British at their own game and brewed his own version. It took decades to establish but he eventually abandoned all his other products to concentrate on the porter he named after himself.

He exported the first shipment of Guinness to England as early as 1769 but the stout did not travel well. By the 1830s British factories had taken over the bottling and distribution and helped turn it into an international brand. By the 1890s, Guinness began to get serious with its brand and insisted all its products had uniform labelling and trademarks. By then, the Guinness brewery in Dublin was the largest in the world, and the company, Arthur Guinness and Sons was floated on the London Stock Exchange. But it wasn’t until 1950 that Guinness gained control of its global export business. They had immediate results and increased sales of its export product from 35,000 barrels to 300,000 barrels in ten years.

But Behan left unanswered the question whether Guinness taste better in Dublin than anywhere else. This writer is one of the many who think it does (for what its worth, my favourite Guinness pub is Mulligans of Poolbeg Street). But as Mark Griffiths writes in “Guinness is Guinness”, I and countless others are probably wrong. He quotes Guinness Ireland Brand Controller Mark Ody who says it is a myth, up to a point. “A pint in Dublin might not be a week old [whereas] in England it can be two months in the chain,” he said. “It’s pure myth and speculation – but fresh is fresh is fresh”. No matter, wherever you are having a Guinness this weekend, enjoy. Here’s to the next 250 years. Sláinte go léir.
Posted by Derek Barry at 11:00 pm