Uganda calm after a weekend of riots 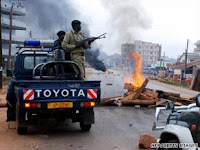 Uganda appears to be calm again after weekend riots that killed at least 21 people, injured 100 and saw 560 people arrested. The riots broke out after a row between the central government in Kampala and Buganda, one of Uganda’s four traditional kingdoms. The clashes took place mainly in and near the capital Kampala. While unexpected, they were spurred by long-simmering rows over land, power and corruption. Human rights groups said the Ugandan military response was heavy-handed. They used live ammunition on crowds, beat and arrested journalists and shut down five radio stations (photo credit: AFP/Getty Images).

According to London-based media writer Roy Greenslade, a photographer with Kampala’s Observer newspaper named Edward Echwalu was detained and beaten yesterday by security forces for taking pictures during a riot. Echwalu said he was arrested after he "took pictures of military men passing near a dead boy". He then suffered beatings after he rang his boss to complain. Greenslade also said that a Buganda radio station, CBS, went off the air.

Uganda’s four kingdoms, (Buganda, Busoga, Bunyoro and Toro) enjoyed a level of autonomy under British colonial rule but were abolished in 1966 by then-national leader Milton Obote. However, in a move to gain popular support, current President Yoweri Museveni restored the cultural and ceremonial powers of the traditional leaders, who were still revered by their subjects. The kings are constitutional barred from playing an active role in national politics but the law remains vague on many points. Government officials and the Buganda kingdom remain at odds over land, sovereignty and political power.

The latest trouble erupted after the Bugandan monarch, known as the Kabaka was banned from visiting a disputed part of his kingdom to celebrate National Youth Day. The Kabaka had attempted to visit the flashpoint town of Kayunga north-east of the capital on territory claimed by his kingdom. Kayunga is an area where a small tribe called the Banyala has for years agitated to be recognised separately from Buganda. However the central government has been keen to keep a lid on the problem as other tribal areas might follow suit and the system of kingdoms could unravel and with them, Museveni’s support base. Museveni could not guarantee the Kabaka’s security in Kayunga and banned the visit.

But when the Kabaka announced that the trip had been cancelled it triggered angry riots in Kampala and several central towns among Baganda youths, which are Uganda’s largest ethnic group. The riots escalated after local radio stations announced rumours that Buganda leaders were arrested. Rioters burned tyres and cars, set buildings afire and looted stores. They then strewed the streets with the debris of torched cars and burned tyres. Police reacted by firing tear gas and live ammunition. Human Rights Watch’s Africa director Georgette Gagnon said the available evidence raised serious concerns that police used excessive force in confronting demonstrators. "A thorough investigation is needed to find out who is responsible for yesterday's violence,” she said.

Museveni blamed former ally and now opposition leader Kizza Besigye for inciting the riots. The president claimed Besigye, head of the Forum for Democratic Change (FDC) wanted to see more bloodshed. Besigye rejected the accusation and said the protests were triggered by the government's actions. The opposition said major reforms were essential if the next election in 2011 was to be free and fair. While multi-party elections have only been in place since 2005, Uganda has made a remarkable transition to political and macroeconomic stability after years of civil war during the 1970s and 80s.

Uganda’s economic prospects received another boost last month when the US-based Tullow Oil company announced a major oil find. Tullow said its drilling site in the Congolese border town of Ngassa may contain significant oil resources. It and partner Heritage Oil have so far discovered 700 million barrels of oil in the Lake Albert region of Uganda with estimates that Ngassa could contain three times as much. The oil lies within the boundaries of Bunyoro which could become the epicentre of economic power further fuelling tensions between Kampala and the kingdoms.

Yet Uganda has been relatively stable since Museveni grabbed power in 1986. He won an election in 1996 and two more in 2001 and 2006. He faces re-election again in 2011. Analysts say the president is trying to build tribal alliances and weaken rivals through divide-and-rule ahead of that election. But he is risking a growing underclass of angry, unemployed youth in Buganda or Bunyoro will be alienated. As the country’s Daily Monitor said, "nothing unites them more than poverty and a sense of disenfranchisement -- and that is one war that cannot be fought with bullets.”
Posted by Derek Barry at 12:26 am