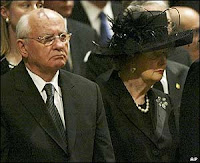 A little-known researcher in Moscow’s Gorbachev Foundation has done the world an extraordinary favour when he smuggled secret 1980s Politburo papers out of Russia. Last week Pavel Stroilov published documents that revealed the leaders of the Western World were lying when they said they wanted a united Germany. Stroilov copied more than 1,000 transcripts of Politburo discussions before they were sealed off. Among the many astonishing details there are a meeting between Mikhail Gorbachev and Margaret Thatcher where the British PM said he should pay no attention to Nato communiqués. The reality was that Britain and France (and presumably the US too) feared a united Germany even more than the red menace in Moscow. (picture: AP)

But to some people this was hardly a revelation that the West preferred the devil they knew. The Telegraph noted that Thatcher herself alluded to the Moscow lie in her 1993 autobiography when she said she was “apprehensive” about the prospect of a united Germany. Meanwhile Spiked’s Marxist writer Mick Hume says the revelations should only be a shock to those who take “the anti-Soviet statements of Western leaders at face value.”

Hume points to an invariable human failing: the tendency to believe what we see or hear. Information is a valuable commodity but a dangerous one too and it hardly surprising the Russians (like those in power in the West) place an embargo on all sensitive government records until well after the events have taken place and the participants are either retired or dead. But now that this is in the public sphere it has changed from being tacit to explicit knowledge. It can be taken from place to place, it can be internalised, and it can become personal knowledge. Knowledge transfer is a learning process and relies on wide dissemination of information.

It is the role of the world’s media to provide that information fully and fairly. As soon as an English translation is available, Stroilov’s thousand documents should be published in full either in print or online. But as the great 19th journalist Lincoln Steffens found out, some information would never be printed by any newspaper. Steffens was idealistic but would never report on police brutality or political corruption because the complaints were coming from “faddists: co-operators, socialists (a few), anarchists, whom nobody would listen to.” By nobody, he meant his editors, wealthy readers and the city’s elite.

Arguments about what information should be in the public domain are complicated by the current push for media owners to start charging for online content. The push goes against the grain of those who believe “information should be free”. Jeff Jarvis is one of the most strident voices against paying for content. He says it is costly, it impacts branding, there are other free sources and perhaps most important it takes “the content out of the conversation.” No one can talk about something they cannot see.

Jarvis is also a big fan of the power of Googlejuice and that company’s CEO has his own view of whether information is worth paying for. Eric Schmidt told a group of British broadcasting executives last week that general news publishers would find it hard to charge for their content online because too much free content is available. Schmidt agreed with the commonly-held opinion that the information had to have niche value such as business news to work.

There is a good reason why this is so. People will pay for information they think they can make money from. As American essay and programming language designer Paul Graham wrote earlier this month, consumers never really paid for content and publishers never really sold it either. Graham says the price of books, music and movies depends mostly on the format and there is no additional charge for quality or quantity. The content is in fact irrelevant. Selling information is a distinct business from publishing, says Graham. Those who can’t sell their content will have to give it away and make money indirectly or embody it in things people will pay for.

Graham says giving it away is the future of most current media. But those in the business are slow to accept this conclusion. Meanwhile it is giving every indication of a business in crisis. Newspaper jobs have fallen from more than 450,000 in 1990 to fewer than 300,000 today. Jarvis calls the media the first “post-industry.” But as communications theorist Dennis McQuail wrote, the Information Society so beloved of Jarvis has no core of political purpose, just an inevitable logic of its own. In this, there is an ideological bias towards free market outcomes.

Stroilov’s documents don’t fall into the niche business content category. No-one is going to make money from knowing what went on in secret Kremlin meetings in 1989. But they are important for all that. They contribute greatly to the public knowledge about the mendacity of leaders, the problems of ideology and the course of history. Gorbachev and Thatcher were unable to stop the Berlin Wall from falling, and the West could not stop Germany from re-uniting. Despite such diversions that followed such as the Wars on Drugs and Terror, the fall of Communism would eventually reveal the West’s true preoccupation – making money.
Posted by Derek Barry at 12:19 am